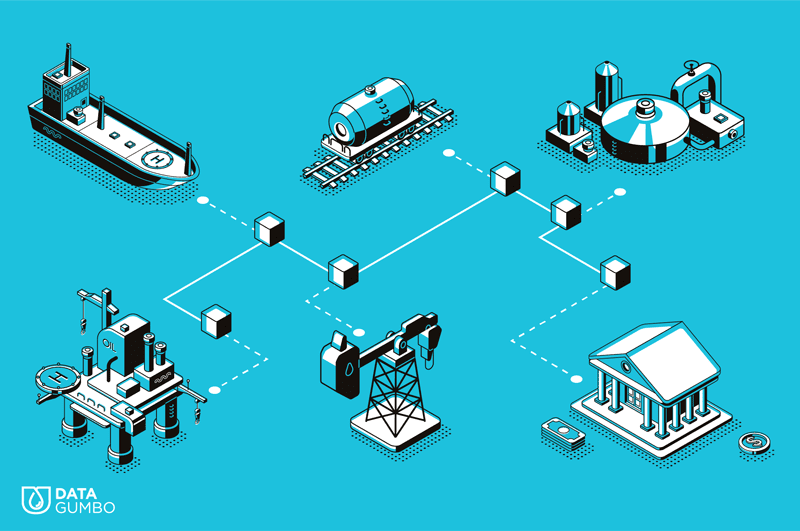 Out of Bitcoin came blockchain technology, which as an immutable ledger system has more business use cases than crypto. Before proceeding any further, it is important that the distinction between crypto currencies and blockchain technology is clear. Blockchain is a technology that enables monetary instruments such as Bitcoin to function, and the technology goes far beyond stored value. As the oil and gas industry changes and absorbs new technologies, blockchain has been one way to speed up many processes, including the handling of water haulage contracts and invoicing.

Water Haulage Gets a Blockchain

The pilot program which tested the blockchain technology was developed in partnership with Data Gumbo utilizing its GumboNet blockchain network. Essentially, it is a platform for automating produced water haulage from field reading to invoice payment. The pilot program was carried out on five Equinor wells in the Bakken field in North Dakota with water logistics and transportation provider Nuverra Environmental Solutions and a midstream disposal company. This was the first time a blockchain network was used for produced water haulage contracts and invoicing. 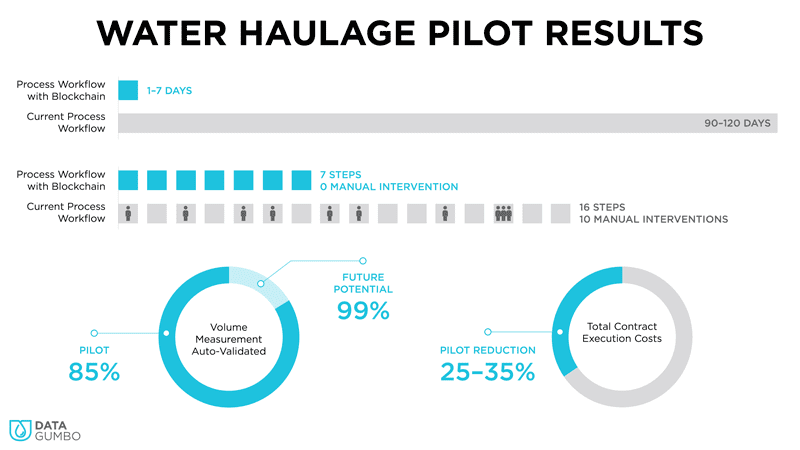 Data Gumbo offers its contracting and invoicing as a Blockchain as a Service (BaaS), which has been able to reduce the number of days required to fulfill invoicing contracts for produced water haulage. According to Data Gumbo, the original manual required 31 steps to complete a contact, which would drag on for weeks just to get one invoice completed. Data Gumbo also added that the old process also “included printing and mailing physical copies of the tickets from the field, and in some cases having ONLY paper tickets from the field left in mailboxes and collected.” Talk about a paper trail and a lot of old technologies to keep track of things. On top of that, there was also pro forma invoicing and other steps involved in the process, further complicating and adding delay to finishing an invoice.

The new process uses e-ticketing solutions from trucking companies (like LiquidFrameworks Field FX) and transmits all data via digital and automated methods. With no paper tickets, no pro forma invoices, and no approval steps required for any charge that has been validated with operator data versus the paper way with tickets submitted. Tickets are submitted daily and matched as they come in. In effect, if the ticket matches for times and volumes within the agreed windows, it is posted in the operator ERPs marked ready for payment within 24 hours. Allocation is then automated based on an export from the existing production management system daily. 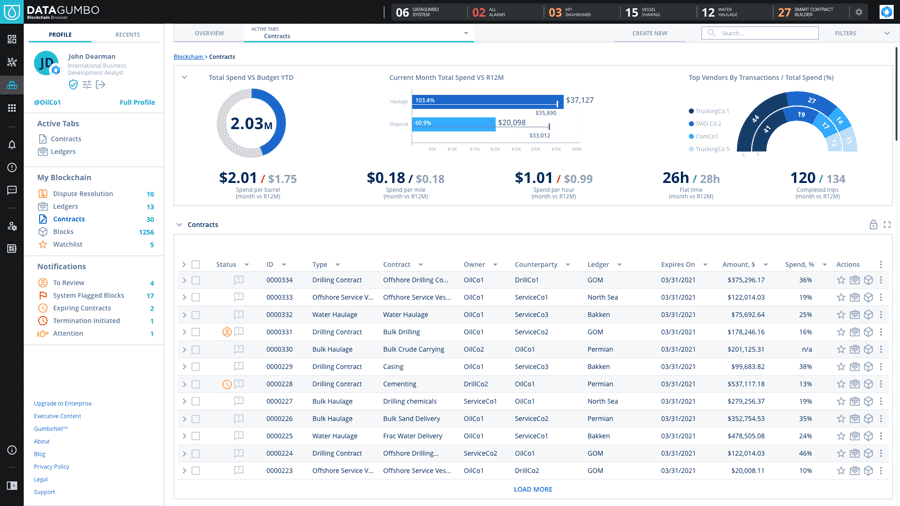 From the description above, one can see that the technology has really enabled an astronomical turnaround time in terms of getting things done. Astronomic can also describe the amazing rocketing price of Bitcoin in 2017/2018; however, compared to the growing use and demand for blockchain enabled solutions in industry, the crypto hype has been in regression and pretty much out of the headlines, while blockchain tech is on the rise, but seldom spoken of.

Data Gumbo goes on to point out that, “In 2018, the hype was around cryptocurrencies and ICOs. Gladly that hype died out!” [Author’s note: ICOs, Initial Coin Offerings, akin to IPOs, Initial Public Offerings – get rich quick schemes.) Again, it is important to draw a clear distinction between blockchain and crypto currencies. Data Gumbo continued, “Blockchain does not require crypto currencies or tokens; we don’t have any. Furthermore, Data Gumbo never considered an ICO. Various groups have been talking about the year blockchain and/or distributed ledgers will finally go mainstream from the perspective of institutional investors embracing cryptocurrencies and tokens since 2014.” As we can see, there are many uses for blockchain technology outside of crypto currency. “In reality, distributed ledgers are being adopted by both financial institutions such as think, R3, Corda, and large companies (Equinor, Walmart, Maersk) at an accelerating rate since 2018, but without any crypto involved,” said Data Gumbo.

The oil and gas industry will benefit in the long term by adopting more blockchain technology because it will provide the following benefits: reduce cash cycle time, increase transaction visibility, reduce overhead, and the number of cost intermediates. Over the next five years, the use of the technology within the oil and gas industry will continue to grow as more and more companies realize the value that BaaS can bring them. Companies will benefit greatly as they replace antiquated, manual processes, with a lightyears-ahead technology, to save time and money, which will ultimately affect the bottom line in a very healthy manner. 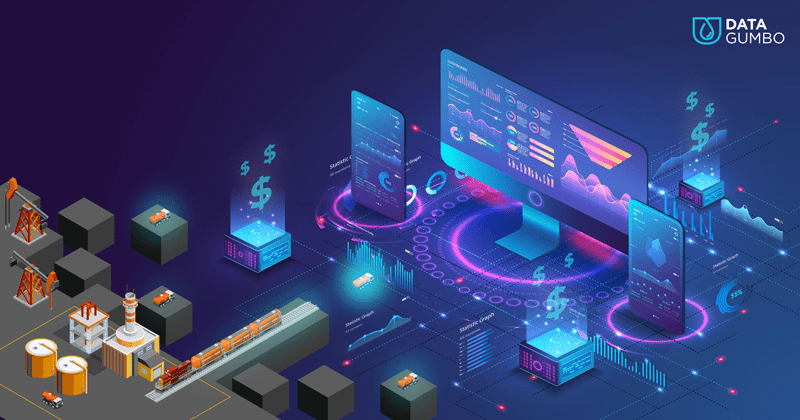 Out of Crisis Comes Opportunity

The 2015 downturn followed by the coronavirus pandemic dealt a one-two blow to the oil and gas industry over a five-year period. With lessons learned and new technologies/processes put in place from 2015, and more changes brought on by the pandemic shutdown, industry leaders will be eager to reach for more technology that will help to alleviate spending and drive up profit.

“Chaining” It All Together

Data Gumbo summarized the state of the adoption of blockchain technologies in the oil and gas industry:

The hype [about Bitcoin and cryptocurrency] is dead and we are now in the slope of adoption for all sorts of supply chain, logistics, and provenance use cases where companies need a way to establish a neutral, shared record of service, delivery, and payment. Once more of these stories hit the press, we expect that most wells drilled and the infrastructure utilized for commodity movement will have at least some distributed ledger aspect by 2022. The savings and transparency are so radical that operators, non-operators, and royalty owners will demand it. Companies that don’t take these steps to automate contract execution and transaction management are going to get out-competed by those who do across many sectors of the oil and gas business.

Question: As a company based in both the U.S. and Norway, do you find one country more open to using blockchain technology over the other? If yes, why do you think that might be?

Answer: Equinor has been a real thought leader on this and is exploring many use cases, perhaps because corporate culture there is more interested in technology in general, but also because there are groups tasked to think strategically about software that don’t necessarily get fired every time there is a drop in the oil price. That said, in the U.S., once a company decides to do something, typically because of the business case, not because of any technical aspects, they can move very fast.