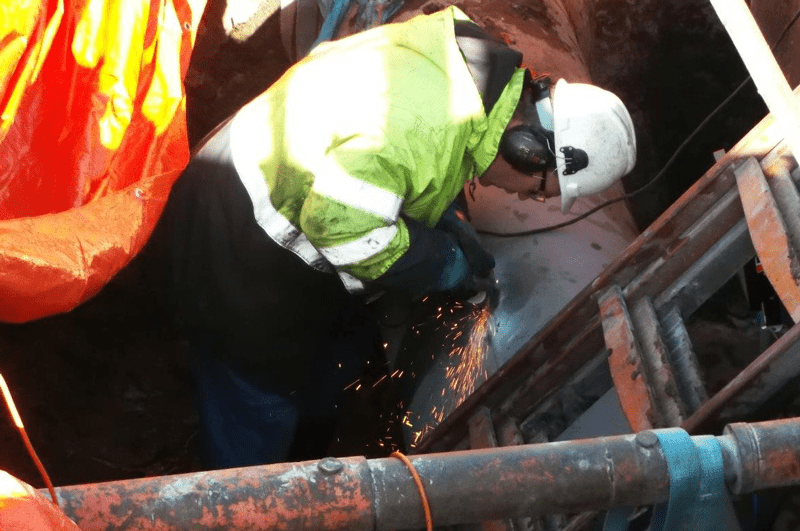 Keeping pipelines operating safely and efficiently is critical to the world economy, so diligent maintenance and effective repairs are critical for the millions of miles of lines transporting oil and gas around the world.

While traditional repairs often are the first choice, they are not always the most effective or cost-effective options. Many standard repairs require hot work and other risks, and their labor-intensive approach introduces costly nonproductive time into the operations equation.

When traditional repairs are impractical or cost-prohibitive, it is important to understand the options. Among those are multiple field-proven composite solutions that can be installed quickly and last for decades. Proven effective over the last 25 years, these versatile systems have achieved success around the globe in applications ranging from preventive reinforcement to emergency repair.

Wrinkle bends are pervasive, particularly in North America, and many exist in lines that were built in and before the 1950s using primitive construction methods. Continuous service and wear take their toll over time, but on wrinkle bends, which experience high strains resulting from bending and axial forces caused by shifting terrain and suffer in many cases from insufficient pipe support, there is particular concern about their continuing integrity.

Inspectors for a liquids pipeline operator in Canada found a weakened wrinkle bend on a 10-inch (254-mm) crude oil transport pipeline. The operator could not afford to shut down the line to cut and replace the damaged pipe because of the high transport volume, so the owner began evaluating composite repairs.

The solution was to use BlackDiamond, a bidirectional weave of carbon fiber combined with a 100 percent solids epoxy that produces a composite system that is stronger than steel, forming a pipe around a pipe, with each successive wrap increasing the pressure rating of the repair. The bidirectional weave of the carbon fiber provides strength in both the hoop and axial directions, a design that minimizes creep and ensures there is no reduction in strength over time.

In this application, a high compressive modulus filler putty was installed to smooth stress concentrations around the wrinkle bend and to transfer the load from the pipe to the carbon fiber repair system. Primer was installed to increase the bond between the repair and the pipe. Then two trained technicians installed six layers of the composite fiber over a 3.3-ft (1-meter) length to repair the wrinkle bend defect.

The two technicians completed the installation within approximately two hours without introducing any heavy equipment or hot work, repairing the line while it remained in operation.

In another pipeline repair, an owner of a 610-mm (24-inch) carbon steel X52 crude oil pipeline in the Netherlands needed to address a dent and a related crack in a seam weld. One of the safety objectives was to avoid welding, so a cut and replace solution was immediately ruled out.

The repair designed for this pipeline consisted of two standard 24-inch (610-mm) Clock Spring sleeves, which are uniquely designed for high-pressure transmission pipelines.

The pipeline operator took the line out of service – but did not evacuate it – while a team of two technicians removed the crack in the seam weld with a grinder. When the installers had ground the pipe sufficiently to remove the crack and filled the dent using the filler kits, they repaired the line using the composite sleeves.

In only four hours, they executed the installation without introducing safety risks, delivering a repair validated for 50 years of service.

In some instances, asset owners are using composites to prevent damage rather than repair it.

The owner of natural gas compressor stations along a large transmission pipeline on the U.S. West Coast used composites in its proactive approach as a corrosion mitigation tool ahead
of government audits.

Typical solutions for addressing air-to-soil interface corrosion have relied on wax tapes or recoat systems, many of which have limited life spans or are subject to damage by climate or mechanical processes that can occur through normal wear and tear. The owner previously had used composite products to mitigate corrosion at transitions between the open-air atmosphere and the soil and was interested in a composite solution.

The project presented multiple challenges. There was a very tight timeline. The installers would have to deal with the climate in the remote locations where the work would be carried out, and service could not be interrupted while the composite solutions were being installed. In addition, some of the pipe on the discharge side of the compressors called for high-temperature adhesive and filler due to temperatures in excess of 175° F (79.4° C).

The range of requirements necessitated the use of multiple products, including Snap Wrap, Contour and Pipe Support.

Once the repairs were designed, a team of 25 technicians removed soil overburden around the pipeline and began the process of abrasive blasting the first of 1,118 locations that eventually would be covered by the Snap Wrap, Pipe Support and Contour WA products. With the surface prepared, the team could apply the necessary adhesive and install the composite solutions.

Over the two months of repair work, there was no disruption of service or operations at the compressor locations. This lengthy project was finished on time and within budget with no system downtime.

The installation team executed the work without incident, delivering a range of solutions that have met with the approval of government auditors, illustrating that composite solutions are a proactive means of mitigating corrosion at the air-to-soil interface.

Composite technology also is often applied in emergency conditions, as in the case of a refinery in Bahrain that experienced line damage from an explosion that created a 3.5 by 4.5-inch (343 mm by 114 mm) hole in a 28-inch (711-mm) carbon steel pipeline.

The line was transporting crude oil under 145 psi (10 bar) pressure, and the wall of the pipe was bent inward in an irregular shape. This pipe was crucial to operations because it was the only pipeline delivering crude to the refinery.

DiamondWrap was applied to arrest the leak and restore the line. As soon as the composite system was designed, a team of 12 trained technicians was dispatched to the refinery. Crude flow through the line was stopped while the team plugged the hole and began preparing the surface of the pipe for the composite repair, which was carried out with about 50 percent of the crude oil remaining in the line.

Technicians installed DiamondWrap over a 9.8-ft (3-meter) length of pipe. Working continuously, the team completed the repair in 16 hours, working through the night to finish the installation as quickly as possible to restore the line integrity so refinery operations could recommence.

The repair was completed in less than 30 hours from the incident that caused the damage, and the pipe was back in service within 48 hours.

Composite technologies are changing the way pipeline owners are managing construction, maintenance and repair. As companies work to reduce risk and contain costs, more of them will be using composite solutions that deliver reliable performance without compromising project economics.

Andrew Patrick’s career spans more than 30 years and encompasses all aspects of pipeline engineering, from construction to inspection to repair. He entered the industry working in offshore pipeline construction and has extensive experience with repairs in refineries and petrochemical plants and on midstream projects. Andrew began his 20-year career with ClockSpring|NRI as its sole sales executive for the western hemisphere and now manages the global sales team as executive vice president, strategic opportunities.

Tim Mally, ClockSpring|NRI Global Manager - Plants/Refineries, has worked in engineering and sales roles in the composite repair industry for 9 years. He has worked to advance composite repair testing, validation, education, and awareness within the oil and gas industry, and has authored 15 conference and journal papers and articles to date. Tim holds a Bachelor of Science degree in Mechanical Engineering and is a member of the ASME Mid-Continent Chapter, Tulsa Pipeliners Club, and the Composite Repair Users Group.