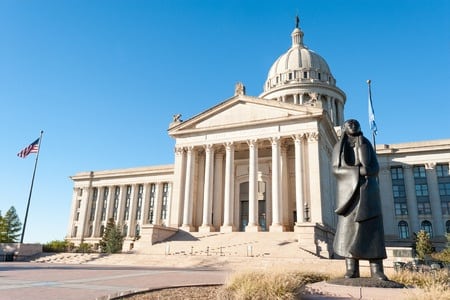 “We have submitted a letter formally requesting her to sign [Senate Bill (SB) 809], and we don’t expect there to be any issues,” Warmington said.

The Oklahoma Senate on May 21 sent SB 809 relating to the regulation of oil and gas in the state to Gov. Fallin for her signature. The House on the same day signed the bill, which the Senate had signed in April.

In a March statement, Hickman said that the bill responds to a trend in neighboring states of a “handful of activists derailing energy operations using pseudoscience as the basis for their argument.”

Voters in Denton, Texas, last November successfully passed an ordinance banning hydraulic fracturing within the city limits. In reaction to the ban, and similar efforts in other Texas towns, Gov. Greg Abbott on May 18 signed Texas HB 40, an act relating to the exclusive jurisdiction of Texas to regulate oil and gas operations in the state and the express preemption of local regulation of those operations.

The bill also allows a municipality to establish reasonable setbacks and fencing requirements for oil and gas well site locations as are reasonably necessary to protect the health, safety and welfare of its citizens, but may not effectively prohibit or ban any oil and gas operations, including oil and gas exploration, drilling, fracture stimulation, completion, production, maintenance, plugging and abandonment, produced water disposal, secondary recovery operations, flow and gathering lines or pipeline infrastructure.

In addition, the bill allows a municipality to enact reasonable ordinances, rules and regulations concerning development of areas within its boundaries that have been or may be delineated as a 100-year floodplain to the minimum extent necessary to maintain National Flood Insurance Program eligibility.

The bill repeals an Oklahoma statute on oil and gas pertaining to the powers of municipalities. That statute says that nothing in state law is intended to limit or restrict the rights of municipalities to prevent oil or gas drilling or under its police powers to provide its own rules and regulations with reference to well-spacing units or drilling or production that they may have under the general laws of the state.

In a statement responding to House and Senate passage of the SB 809, Oklahoma Sierra Club Director Johnson Bridgwater said that, “in light of the fact that the State of Oklahoma recently admitted to a connection between the use of underground injection wells, and the unbelievable rise of earthquakes in Oklahoma, it is unfathomable that the State Legislature would react by passing legislation that strips local governments in our state of their authority to fully regulate and address the very industries and businesses that are being identified as the cause of this very real and very serious threat to the safety and well-being of all of these communities and their residents.”

The admitted connection to which Bridgwater referred came from an April 21 statement from the Oklahoma Geological Survey (OGS) in which State Geologist Richard Andrews said that OGS considers it very likely that the majority of recent earthquakes, particularly those in central and north-central Oklahoma, are triggered by the injection of produced water in disposal wells. According to the OGS, while most of the earthquakes in Oklahoma are occurring within crystalline basement – deeper than most oil and gas operations – reactivation of deeper basement faults from water injection/disposal at shallower depths has been observed in cases of triggered seismicity. The OGS said that the majority of wastewater disposal is targeted for injection in the Arbuckle formations, which cover most of Oklahoma and closely overlie crystalline basement.

The OCC, in a May 11 update on the new directives, said that more than 50 disposal wells have had to shut down operations or reduce total depth to provide disposal into only the Arbuckle formations to mitigate the potential risk of seismic activity. In addition, the OCC said that approximately 150 other disposal wells have reduced their volumes by 50%.