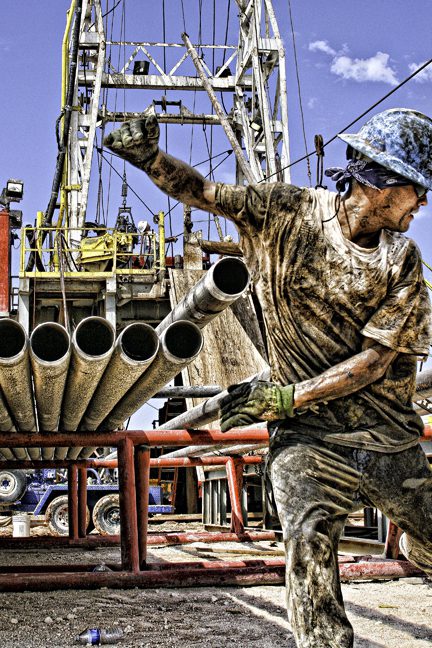 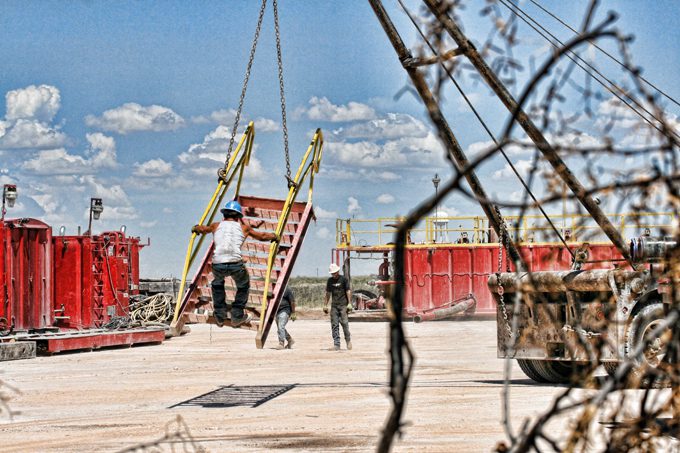 On the morning of the last day of August 2010, returning from my Colorado tour, I left my parents place to head over to the ghost town of Barstow to shoot (at mom’s suggestion). There was a rig up at the end of of the road (half a mile away) – visible from their place. It was on the way, so I decided to stop by and take some shots from across the street. The site was on a lot where there used to be a couple of caliche pits known as the “Turtle Ponds”. Perhaps it was most infamously known as the place my brother Jody broke both legs and an arm jumping his dirt bike. The past time of riding in the various caliche pits had also sent me to the hospital many years years before, but I digress…

I saw a young man on the phone and explained what I was doing so no one would get concerned. He was getting his wife to bring the family out and told me I should stick around as they were about to case the well. Before you know it, I was onsite with a borrowed hard hat, then up on the rig floor. The driller told me just to stay out of the guys’ way. No problem – I didn’t want to cause any problems and appreciated the access. You see, there was what I gathered as a ‘PR problem’ between the oil?eld companies and community at the time. When I was growing up, there was activity around, but the communities were pretty much just places where people lived. This go around however, the companies were drilling not just ‘in’ the community, but literally in peoples’ backyards!

Now anyone growing up watching the “Beverly Hillbillies” will remember the intro with Jed shooting after some food one moment, then a Beverly Hills millionaire the next. So everyone is getting big royalty checks, right? What’s the problem? Well, when my parents bought their place, I remember the discussion about mineral rights not being included with the property. Practically no one in the area had mineral rights. So now the majority of homeowners were getting, at most, surface rental fees, loss of use of some of their land, and perceived lowered property values. (In reality, it appears to me that the current boom has raised property values so much in the area, this is more than compensated for). It was explained to me that with the current boom, oil companies had to either drill on their leases or lose them, and many of the untapped land was populated. Even a portion of my parents’ land was staked. To me though, oil & gas for the most part, was what that area was built on. Even though you might not work directly in the ?eld, you were likely there because of it, and that should be appreciated.

The people I met could see that instead of documenting the bad deeds of “Big Oil” we’ve seen so much of in the past, I was showing the hard work, and even romanticizing the oil?eld again. I wanted to show it in a positive light. As one client wrote on my blog: “It puts to life how hard these guys work. I am from Midland so I grew up around men who worked and work in the business and I now work in the business. Thanks for finding beauty in the hard working men of West Texas!” 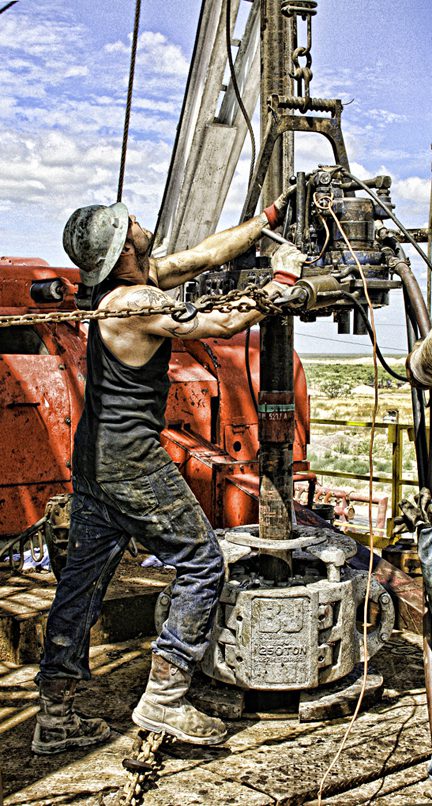 So, I spent the rest of the afternoon getting to know the crew, learning about casing and just having a great shoot on and around the rig. The guys shared their water and lunch with me and talked a little about experiences they’d had. They worked very hard and seemed to really have a great time! I kept in touch with a couple, like Erin – my superstar in the “Dragon Arm” piece with the Eckel tool. Sometimes I tease that while other photographers shoot swimsuit models, I shoot roughnecks. 😉 I was invited back the next day to see the breakdown and moving of the rig down the road, past Mom and Dad’s place to a new site in the Eastern end of Gardendale, south of the new water tower (everyone was on well water til now). I never made it to Barstow that trip. 😉

The move of the rig was like an orchestrated circus – lots of heavy equipment, and lots going on! The rig was down, loaded onto trucks and on it’s way. I stopped by the house for a quick lunch and got down to the new site where the rigs were waiting in line to unload at the previously prepared pad. I watched the rig raise up and captured “Rig & Dust”. While shooting the trucks coming in with the big pumps, one of the guys asked, “Want to see something really cool?”. Of course I did, so I got into position and watched a huge red pump slide off the back of the truck, raising the front end into the air. (“Letting Off the Pump – Wheelie”) followed by lots of dust (“… – Dust”). A dust devil passed through the site, whipping up more of the white caliche dust. As the Sun started going down, I sat my worn Oakley sunglasses on the hood of my truck, positioned where the rig and landscape showed in one lens, giving a solarizing effect. I stared and reflected on the last two days and on what I had captured. I had just a few days to get some of the images ready for my new “Day on a Rig” series to debut at Septemberfest at the Museum of the Southwest in Midland, Texas. The rush effort paid off as the series was really well received (including people like Mrs. Eckel giving me a hard time), encouraging me to continue delving into this niche.

Along with my other niche, old vehicles, subjects range from architecture & objects, landscape & nature to people on the street and more. The work is accessible – brightening and bringing inspiration & motivation into your office or home. From limited edition canvases and paper prints, to metal and ceramic tile coasters and other gift items, we can help you decorate or reward clients and employees. All products are created in-house at my studio & gallery.