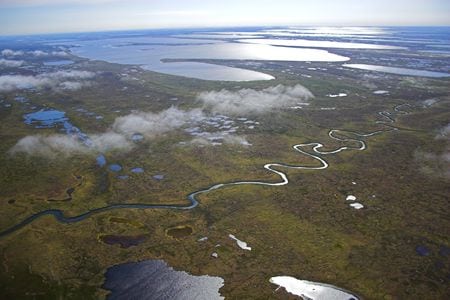 New Orleans Mayor Mitch Landrieu wants the oil and gas industry to pay for nearly a century’s worth of damage to Louisiana’s coastline.

The situation concerning the deteriorating coastline and wetlands in Louisiana is dire. The U.S. Geological Survey observed that from 1985 to 2010 nearly 17 square miles of wetlands were lost per year. Landrieu recognized the important benefits that have been provided by the industry, saying “I don’t believe we should or we must abandon the industry that has provided us with so much opportunity. We can drill, but we must restore.”

Landrieu mentioned that rather than attempting to obtain funds for costal restoration through litigation, the state is willing to “come to a negotiated agreement with the industry. We can come up with a way to fairly tax the industry and put that money to the coast.”

However, if this option is not appeasing to the industry, Landrieu made it clear that he is not opposed to “engage in a standoff and litigation.” The coastal restoration planned has doubled in needed funds, jumping from $50 to $100 billion.

On the other side, Don Briggs, president of the Louisiana Oil and Gas Association, is concerned that “this is about a handful of trial lawyers filing erroneous litigation based on assumptions, not facts,” he said in an interview with the Louisiana Record. He believes that certain lawyers perceive the wealth of the O&G industry to be an attractive opportunity to file suit.

Briggs defended the industry, saying “the oil and gas companies have followed each and every regulation and statute since the inception of [the Coastal Zone Management Act.]”

Both the coastline and environment of Louisiana were severely damaged after Hurricane Katrina in 2005, and Briggs acknowledges the need for restoration, but he believes that certain parties are going about the process in the wrong way.

Briggs believes that these allegations and consequential lawsuits are merely fronts used to fund the coastal restoration plan of Louisiana. He made it clear that he does not think that these lawsuits are merely for demonstrative purposes, saying that those who are suing are doing it “not to make an example, but to fund a large-scale problem that should include the state, the feds, the Corps and numerous other stakeholders at the table.”

The Grow Louisiana Coalition, a supporter for the oil and gas industry in Louisiana, backed Briggs, stating that “a sincere discussion about addressing Louisiana’s coast doesn’t single out the state’s largest industry. As we continue to move forward in that work, federal authorities, including and especially the U.S. Army Corps of Engineers, as well as the commercial and scientific interests who operate in coastal parishes and the parishes themselves, must play a significant role whenever we talk about big issues, including funding.”

The need for a collaborative effort is crucial to assuring the coastline’s restoration as well as securing Louisiana’s future well-being. Landrieu aptly stated about New Orleans that, “without a coast, there is no city.”