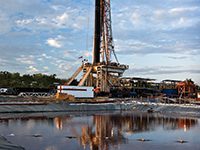 Noise from the Mainstream

Ohio regulators did something last month that had never been done before: they drew a tentative link between shale gas fracking and an increase in local earthquakes. As fracking has grown in the U.S., so have the number of earthquakes—there were more than 100 recorded quakes of magnitude 3.0 or larger each year between 2010 and 2013, compared to an average of 21 per year over the preceding three decades. That includes a sudden increase in seismic activity in usually calm states like Kansas, Oklahoma and Ohio—states that have also seen a rapid increase in oil and gas development. Shale gas and oil development is still growing rapidly—more than eightfold between 2007 and 2o12—but if fracking and drilling can lead to dangerous quakes, America’s homegrown energy revolution might be in for an early end. But seismologists are only now beginning to grapple with the connection between oil and gas development and earthquakes. New research being presented at the annual meeting of the Seismological Society of America this week shows that wastewater disposal wells—deep holes drilled to hold hundreds of millions of gallons of fluid produced by oil and gas wells—may be changing the stress on existing faults, inducing earthquakes that wouldn’t have happened otherwise. Those quakes can occur tens of miles away from the wells themselves, further than scientists had previously believed. And they can be large as well—researchers have now linked two quakes in 2011 with a magnitude greater than 5.0 to wastewater wells. “This demonstrates there is a significant hazard,” said Justin Rubinstein, a research geophysicist at the U.S. Geological Survey. “We need to address ongoing seismicity.”

Rubinstein was speaking on a teleconference call with three other seismologists who have been researching how oil and gas development might be able to induce quakes. All of them noted that the vast majority of wastewater disposal sites and oil and gas wells weren’t connected to increased quake activity—which is a good thing, since there are more than 30,000 disposal wells alone scattered around the country. But scientists are still trying to figure out which wells might be capable of inducing strong quakes, though the sheer volume of fluid injected into the ground seems to be the driving factor (that’s one reason why hydraulic fracturing itself rarely seems to induce quakes—around 5 million gallons, or 18.9 million L, of fluid is used in fracking, far less than the amount of fluid that ends up in a disposal well). “There are so many injection operations throughout much of the U.S. now that even though a small fraction might induce quakes, those quakes have contributed dramatically to the seismic hazard, especially east of the Rockies,” said Arthur McGarr, a USGS scientist working on the subject.

What scientists need to do is understand that seismic hazard—especially if oil and gas development in one area might be capable of inducing quakes that could overwhelm structures that were built for a lower quake risk. That’s especially important given that fracking is taking place in many parts of the country—like Oklahoma or Ohio—that haven’t had much experience with earthquakes, and where both buildings and people likely have a low tolerance to temblors. Right now there’s very little regulation regarding how oil and gas development activities should be adjusted to reduce quake risk—and too little data on the danger altogether.

“There’s a very large gap on policy here,” says Gail Atkinson, a seismologist at the University of Western Ontario. “We need extensive databases on the wells that induce seismicity and the ones that don’t.” So far the quakes that seem to have been induced by oil and gas activity have shaken up people who live near wells, but haven’t yet caused a lot of damage. But that could change if fracking and drilling move to a part of the country that already has clear existing seismic risks—like California, which has an estimated 15 billion barrels of oil in the Monterey Shale formation that could only be accessed through fracking (limited fracking has been done in California, but only in the lightly populated center of the state). Environmentalists who seek to block shale oil development in the GoldenState have seized on fears of fracking-induced quakes, and a bill in the state legislature would establish a moratorium on fracking until research shows it can be done safely.

Regulation is slowly beginning to catch up. In Ohio, officials this month established new guidelines that would allow regulators to halt active hydraulic fracturing if seismic monitors detect a quake with a magnitude of 1.0 or higher. But it will ultimately be up to the oil and gas industry to figure out a way to carry out development without making the earth shake.

From NPR —
Of course, they’re going for the permits…

What Can Be Done to Prevent Drilling-Related Earthquakes? A report out from the National Research Council referenced a nine-year-old checklist of best practices for drillers and disposal well operators. But it included the observation that “government agencies and research institutions may not have sufficient resources to address unexpected (seismic) events.” At a June 2012 Texas House Committee on Energy Resources hearing, state policymakers heard recommendations on what can be done to mitigate the risk of induced earthquakes. Melinda Taylor, director of the Center for Global Energy, International Arbitration, & Environmental Laws says other states have more safeguards in place against unwanted earthquakes. In Ohio, for example, well operators need to do a “fairly detailed analysis of the geological conditions” before the state’s regulatory agency offers a permit to authorize a new disposal well. ”So they can determine whether or not it’s likely to cause problems,” Taylor says.

Facts from the Midstream

From The Oklahoman—
More is needed before regulatory free-for-all

The earthquake swarm shaking Oklahoma right now seems to be similar to one that affected state residents more than 60 years ago. Glen Brown VP of geology at Continental Resources Inc., said he discovered evidence thatOklahoma’s rising number of earthquakes isn’t as unprecedented as most people believe. Brown found a similar earthquake outbreak in the 1950s, when Oklahoma did not have equipment to properly measure seismic activity. He also said those quakes may have been related to activity around the world, noting a similar spike in massive earthquakes worldwide since 2002. He also noted much of Oklahoma’s earthquake activity has been in different areas than where companies have drilled for oil and natural gas. In addition, there have been similar earthquakes recently in Virginia and South Carolina, where there is no oil and gas exploration; and seismic activity seems to also be increasing in Mexico.

With recent studies by both the University of Texas and the U.S. Geological Survey tentatively establishing linkage between improperly sited and managed water disposal wells and minor seismic activity, this is a subject the oil and gas industry must take seriously. Developers and operators of disposal wells must be completely transparent in their operations, openly share relevant data, and work cooperatively with state regulators to develop approaches to the issue that protect the environment, and ensure the public can continue to benefit from the economic prosperity that oil and gas resource development brings to us all – David Blackmon

Since 1949 more than 2.5 million hydraulic fracturing jobs have been performed worldwide, with more than one million of those jobs taken place here in the United States. For the first time in U.S. history, we are within arms reach of gaining our own energy independence. – Jessica Byrd CEO, Clean Energy Chemicals

The focus of the cause of the increase of earthquakes does not appear to be on hydraulic fracturing and/or horizontal wells. The focus is on injection wells. There is definitely the need for more information and more research to determine if the earthquakes are by natural causes or may be by man-made causes. The US oil and gas industry is taking the lead in supporting these research efforts. – Mark Stansberry Chairman of The GTD Group

Hydraulic fracturing is changing the pattern of local and world trade. The Oil and Natural Gas Industry takes ownership of this issue and commits to a goal of zero tolerance of pipeline environmental quality accidents. The effect on global oil and gas is the burden of inter-regional pipeline exporters and the reliance of inspectors and contractors to uphold policy and procedure guidelines to eliminate any and all threats of contaminated water, sediment readings, and volatile organic compounds. A mix of healthy ingredients to build an unwavering attempt to build organizational relationships that eventually will lead to trust is needed to move forward. – Mike Thomas Pipeline Inspector

Everyone likes to jump on the bandwagon and bash the oil and gas industry, yet they do it while driving their cars, riding their bikes, wearing their shoes, typing on their computers, writing their picket signs, drinking their coffee that was brought to them at Starbucks in their printed little cup from the guy that drove his car or rode his bike to work to the store that uses 1000’s of items daily that are produced with the help of the Petroleum industry. They want their cake and the ability to eat it too. – Shaun Fortune

Once again, environmental extremist seek to blame the oil and gas industry for events that have been naturally occurring since the foundation of the world. Should their agenda stand, the economic recovery being led by the industry will end and the opportunity for America to become energy independent will be gone. Globally, a lot of our security issues lie in the fact that we are not energy independent. The oil and gas industry requirements for personal and process safety are rivaled only by the nuclear and airline industries. The public has no concept of the training required just to set foot on and oil and gas location. –  James A. Junkin, President Mariner-Gulf Consulting & Services

It’s simple, if fracking was the sole cause of all these earthquakes, then why don’t we hear about earth quakes in south Texas and North Dakota. – David Ashley Clifton

Here is food for thought, if Fracking is causing earth quakes then why do we not see earth quakes in the Eagle ford shale area where more Fracking is done in the world? – Louie Esparza – Cross Timber Ranches

I would rather have a job in the oil industry and having our economy doing well and lessening our dependence on foreign oil, crisis in Iraq at this time is a good example. The problem is reports being made that are incorrect or do not have enough info to confirm. – Robert Meek DPLXCO – Ardmore, OK

There is no way that INJ. wells cause earthquakes. All INJ. wells are shallow compared to the earthquakes that are miles deep. – Doug Shipman, Seminole, OK