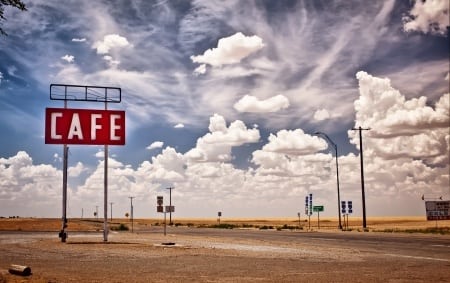 Three months ago, I made the decision to pack my bags, rent out my house and move to the Eagle Ford Shale area to do sales and on-the-ground marketing in the Oilfields. Before I left, I wrote an article about marketing in the oilfields for Oilman Magazine, which you may have read.  This is a follow-up on what I have learned in the last three months, and hopefully will give insight in selling to the oilfields.

The first thing you should know is practical: nothing is ever close.   Getting from one town to the next might take 45 minutes of driving.  The roads are rutted due to all the semi-trucks, trailers and traffic, and travelers drive 80 mph on these small roads.  You’ll be driving for hours here, so plan ahead to schedule your locations, routes and travel days.

Next, some of what you see here is an illusion: an illusion of wealth, status or company success.  Money and success is not transparent in most of Texas (as you might see in other places such as California, Washington or New York). And if you don’t know the little things to be on the watch for, you could end up foolishly walking away from a great lead or connection.

Lastly, your new sales and connections won’t happen next to a rig site, a strategic seat at a football game, a business meeting or at an expo.  Your leads and sales will happen over coffee in the morning at a local café, or at dive bar made of tin that might have one jukebox and no tables.  Outward appearances will deceive you.  Remember, everyone here has something to offer.

Traveling
You’re going to do a lot of driving.  Get used to it.  In smaller oilfield towns like Cuero, Yorktown, Kenedy, and Alice, you’ll drive through the main road and think you have seen the entire town.  Even though most of the oilfield support companies and satellite branches will be on the main roads, I’ve seen several companies located on dirt roads and small county roads that you would not otherwise consider checking.  As for larger cities like San Antonio, Houston, and Dallas/Fort Worth, I wish you good luck.  Houston takes a full hour to cross and is jammed with companies, traffic and people.  Most the companies in the smaller towns aren’t listed on the internet and some don’t even have physical addresses.  Finding them is a task in itself.

One of the main things people here want from you is presence.  People here aren’t interested in a guy who shows up, looks out of place and disappears after a week.  They want to see that you’re embedding yourself in the community or at least see you stop by a few times.  When folks here found out I actually packed up and moved here, they were more receptive about who I was and why I had come to Texas.   Make yourself seen a lot for several months before you expect a warm reception.

The Illusion
We should all know better than to judge a book by its cover, but it’s a mistake we have all made.  In the oilfields, a huge amount of money is made and spent.  You might not see all of it initially.

My first surprise encounter was a beat-up old warehouse on a fenced lot I passed while driving to Beeville.  The building was rusted, patched together and looked abandoned.  The company name and phone number had been painted on a plywood sign in the front of the building.  I remember thinking it would be a small shop with just a few employees that was likely not generating any substantial revenue.  I thought I’d go in and see what they did.  Inside, the office was nothing fancy.  The business turned out to be a fabrication shop.  They weld trucks, tanks, and specialized piping for oil companies.  The yard was full of equipment, trucks, pipe and other types of things.  I sat down with the owner and talked to him about how they were doing financially.  They did several million in business this past year and were growing.  I told him that when I first pulled up, I thought they would be a small, struggling business.  He told me they were too busy to upgrade the building, the trucks and equipment in the yard were extras and they pay cash for all their new equipment.  Everyone in the area knew of their company, so they didn’t feel like they needed to market or hang up big fancy signs.  I thanked him for the education and left my number.

I learned that money isn’t flashed here.  You can’t gauge success or growth by appearance.  That twenty-something roustabout sitting at the bar with a shiny (or dusty) new truck in the parking lot?  He has no debt and pays for everything with cash.  Yep, he will say, it’s paid for, along with the boat attached to the back of it.  He’ll sit and chat with you all night about fishing and drink cheap beer.  Or the older gentleman I saw every morning my first month here, wearing the same jacket and old leather cowboy boots at the coffee shop who would ask me, “where you off to today?” each morning?  He owns several hundred acres of land dotted with oil rigs and is well-known in the community and oil industry.  You have to come here with an open mind and the ability to listen to people.  Don’t be artificial.  Notice the little things and take the time to talk with everyone and hear their story.  If you rush, you will end up missing several opportunities and leads, not to mention missing an opportunity to make some good friends.

Beer
Local bars, cafés and restaurants are hotspots for leads, direction and sales. Once people in the community get to know you, they want to help you.

When I first got to Texas, I stayed in a motel for the first month.  The oilfields are spread out and I didn’t want to get tied into an apartment lease without knowing where I would be traveling day to day.  (In fact I’m bringing down a travel trailer this month because I found out I needed to become more mobile.)  Next to the motel is a little café and every morning as I bought coffee, I would see the cook come out and staple that day’s lunch special in front of the cafe. The café was located by the fishing docks and after a few days I mentioned to him that if he posted them on the corner all the people going to the docks would see the sign and possibly come in and if he left several signs leading up to the corner they couldn’t ignore them. What can I say?  I’m always marketing.

The next day I suggested something else.  Eventually, he asked me what I did for a living and I told him about my career in financial sales in the oilfields and that I had been in marketing and design for a good few years.  As it turns out he wasn’t the cook, he was the owner.  The café was a fun little side business and his main business was located in Victoria, where he had 12 welding trucks and several oilfield contracts.  I told them I was having a hard time reaching other small contracting companies like his and asked if he could give me some direction.  I’ve remained friends with them for the last several months.  This same type of thing has happened to me lately in a few of the local bars. It takes time for people here to accept you, but if they do, they will look out for you.

This is Texas, and people fish, hunt, go out, dance and drink a lot of beer.  You will see them in small cafés and restaurants in the morning and local bars at night or on the weekends.  You want to make connections? Be where they are.  Do the same things they do.  Don’t rush your conversations, listen carefully and try to think of a way to help them out.

A few things to remember before you get here.