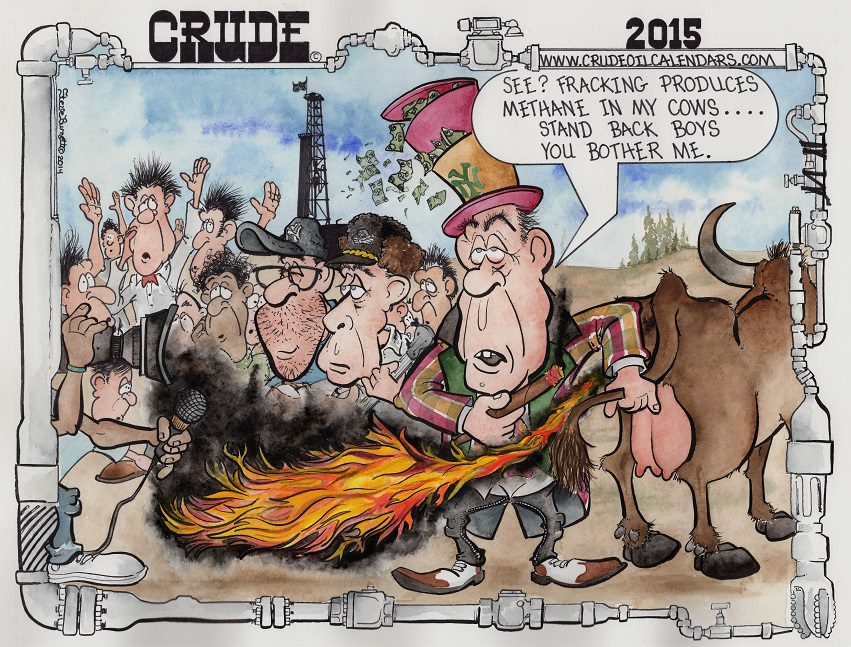 What about Gasland 3? Where could Jeff Fox find some more naturally forming methane to blame on the hydraulic fracturing industry so he could whip up the fractivist zombies? After all, facts and scientific data are not part of the Gasland agenda.

So why not blame the naturally occurring methane in cows on the fracking industry? Think about it, Gasland 3 could still build on the Jeff Fox trademark/signature flare up of methane, albeit the methane is a natural process in cows – a trivial detail. Never the less, as Gasland 1 and 2 have proven, a big an unexpected ignition of flames is always a powerful zombie instigator.

I am confident that at least some fractivist zombies, and probably most, have no idea that methane occurs naturally in cows – the same way it is a naturally forming gas in some water reservoirs. Think of the film drama it would create.

I can see it now. The opening scene is a close up of the slow moving hands of a banjo player as the audience hears a crescendo of banjos. It does not take long for the audience to recognize the “Deliverance” theme of dueling banjos. The scene pans out to focus on the squinting eyes of the young picker. Is it Billy Redding? Is this the sequel to Deliverance? This will not end well for somebody.

At this point, I need to inject the theory on Jeff Fox’s banjo theme. It is true, Gasland is meant to not end well for somebody. The Gasland’s claim is to make the victim the petroleum industry. However, if that does not end up being the case, it is of relative insignificance to Jeff Fox, because either way, he has accomplished his end-game of creating a significant income for himself.

Besides, when the scientific evidence proves that methane is a natural product of bovines, Jeff Fox and the frothing zombies will only go into their conspiracy shuffle. With the shuffling zombies and the loud picking, it is sometimes difficult to conclude, “For Whom the Banjo Tolls?” It is obvious to any non-zombie that the banjo does not play for the petroleum industry but rather for the people who are willing to drop funds into the pocket of the squinty-eyed picker.

As the camera pans out, the audience recognizes it is not the young Billy Redden at all but rather the king of the ghost-conflict, Jeff Fox. He is play dueling banjos with Valdimir Putin, and he just happens to have a vested interest in slowing down the development of fracking. The banjo couple is the topside and bottomside of the fracking apocalypse. If they had their way, the world would be full of frothing, shuffling, fractivist zombies.

As the camera further pans to take in the whole scene, the audience now sees a rancher, or more like a New York actor posing as a rancher. I know way too many honest cattlemen that will not play the lawsuit roulette with the petroleum industry, much less dance on the Gasland game show. For Gasland, facts are irrelevant, so anybody that owns a cow would work.

Of course, with the income generated by Gasland 1 and 2, and the promise of multiple millions the plaintiff would received in a settlement from the oil companies, it would be easy to locate a cow owner willing to verify that his cattle never produced methane – at least not at the level they do since fracking was completed. The opening scene concludes with the cow person lighting the cow’s gas to prove it does indeed have methane in it.

Consider the possibilities for the fractivist zombies. Since methane is now produced in cows due to fracking, then obviously beef products are contaminated. They could now approach cities for banning beef products. The Environmental Protection Agency (EPA) could step in and have fracking banned while they run extensive research on cow methane and the effects on beef products.

Think of the list of chemicals that would be created from cow gas research. Even fast food burger producers – think McDonalds – could jump on the fractivist band wagon. The EPA could even require the petroleum companies to put vapor recovery units on all cows. Wow, I can see another Academy Award coming. I better call Jeff Fox and see if I can sale my script. Maybe I can get Putin to finance it.