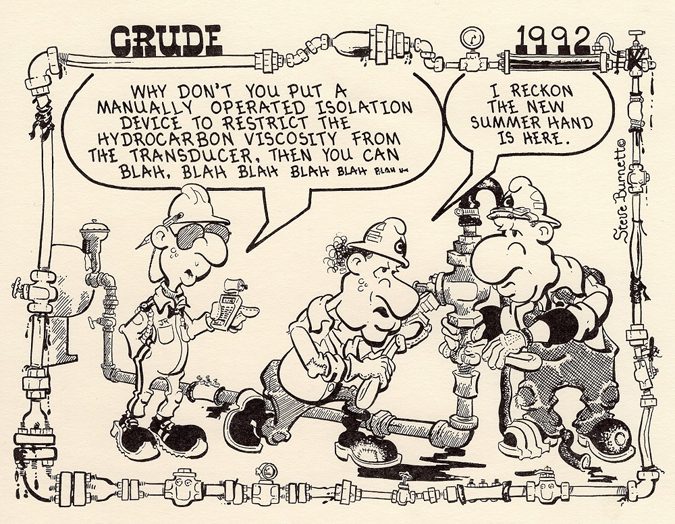 When people ask me what a summer-hand needs to survive in a summer in the field, I tell them, besides the PPE, the most important thing is a sense of humor. Some field-hands view this as their only opportunity to devil a prospective boss. A summer-hand’s attitude and how well he can take a joke will set the pace for his, as well as our entire summer. Besides every field-hand will tell you once he becomes a boss he will no longer posses his sense of humor.

One year we had a summer-hand from one of the most reputable petroleum engineering schools in Texas. He was a young lanky kid that an old-timer would describe as having to “stand twice to cast a shadow.” He told us his dad was the V.P. for a major drilling company, (As a field-hand I noticed how most summer-hands have V.P.’s for dads). After a few days of the standard pranks, I found myself working in the well bay with the summer-hand. I asked him to go to the tool locker and bring me a crescent. After a few seconds of silence the young hand turned to me with a blank expression and asked, “What’s that?”

Now, how a man gets to be in his twenties and doesn’t know a thing about tools is beyond me. I guess that is the difference between a field-hand’s son and a V.P.’s son. All I knew was this was too good an opportunity to pass up.

I walked over to the tool locker with the summer-hand and picked up a crescent. I selected one that had the brand name “Crescent” stamped into the handle. “This is a crescent,” I explained. “What does it say on the handle?”

He glanced at the handle and said “A Williams.”

I knew the brand name Williams was cast into the handle. “That is correct”, I responded.

I then proceeded to explain the difference between a male and female connection. After showing him a 3/4 inch to 1/2 inch bushing I asked him, “What is this?”

“A bi-sexual,” he exclaimed.

The young summer-hand went on to become a full grown engineer and today he’s a boss for a major production company.

If you’re ever on a location and your boss tells you to “tighten your bi-sexual with a Williams,” you can just thank me.