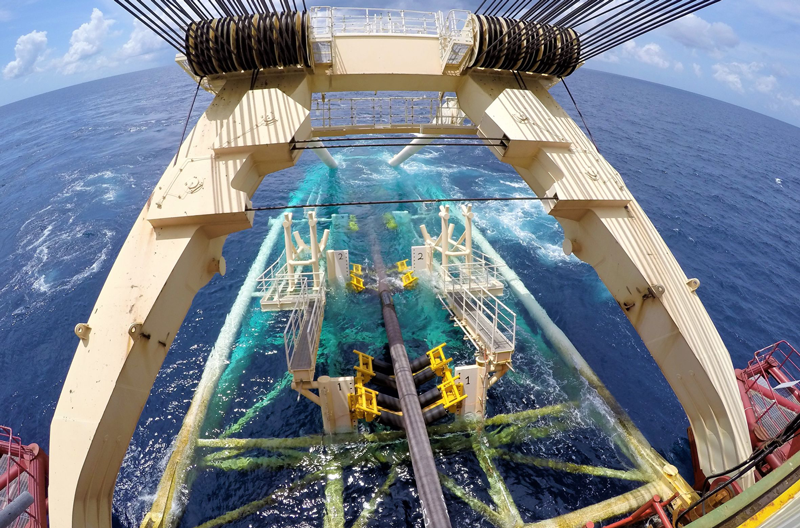 Of all the methods for pipeline installation, the Reel-Lay method is the one which subjects the pipeline to the most punishment before it is finally laid to rest on the seabed. The pipe is already plasticised during reeling before being sent to site for installation and then subjected to further plasticisation as it is uncoiled, straightened and then laid down to the seabed.

This article provides an overview of the potential failure modes that may occur for the Reel-Lay method of subsea pipeline installation and provides ideas and past learnings for considerations in order to overcome such potential failures.

Reel-lay method of rigid pipeline installation refers to a method of pipeline installation where a rigid pipe is un-spooled from a drum, straightened, tension applied, and then laid over a ramp to the seabed. To do this, the pipe is first fabricated onshore and spooled onto a large drum (usually located on the lay vessel). The lay vessel is then mobilized to location, where the pipe is unspooled, straightened, and then passed through a tensioner before leaving the vessel.

Some of the key risks or challenges facing a reeling operation include:

Some of these critical path risks include:

A pipeline used for a reel lay project undergoes a few cycles of plastic deformation. The pipe is first spooled onto a reel drum on a vessel for transportation. During offshore installation, the pipe is unspooled, straightened and laid down onto the seabed. During the process, the pipe is fully and cyclically plasticized. Figures 3 and 4 show the locations where deformations take place during spooling and laying, and Figure 5 shows the plastification cycles undergone by the pipe.

Plastification is an irreversible phenomenon that modifies the pipe properties. In this case, it affects the pipeline properties in 3 ways:

Plastification induces permanent deformation to the pipe in the form of residual ovalisation. Pipe ovalisation is a key parameter for deep water applications. It affects the ability of the pipe to resist collapse under external pressure. The pipe residual curvature is eliminated by accurate straightening. Plastification also modifies the mechanical properties of the pipe. A pipe being plasticized hardens or softens depending on its constitutive materials, and its yield stress is modified. Plastification also modifies the fatigue properties of the pipe.

To account for the punishment received by reeled pipelines, line pipe used for reel lay are generally specified to much higher requirements than other methods, e.g., S-Lay, J-Lay or Tow methods because the pipeline laid via reel-lay is subjected to much more punishment than the other methods. Hence, manufacturing specifications are much more stringent, for example:

To avoid failure of welds during spooling, unspooling and straightening where the pipeline undergoes plastic deformation, stringent weld requirements are also required to avoid problems with girth welds. One of the measures typically adopted is:

Handling of the pipe during spooling is not an easy operation and special handling care/pre-cautions need to be taken. These include:

For successful reeling operation, the Contractor needs to accurately estimate the followings and ensure that the pipeline is sufficiently strong to withstand these:

Dr. Eng-Bin Ng has over four decades of experience in subsea pipeline design and installation and is an experienced and well-regarded industry professional. He has worked for Consultants, Contractors and Operators, and has held design, field, project and managerial appointments. He is a Chartered and Professional Engineer with qualifications in Engineering, Business and Law. He is also the author of the book “Subsea Rigid Pipelines – Methods of Installation”.