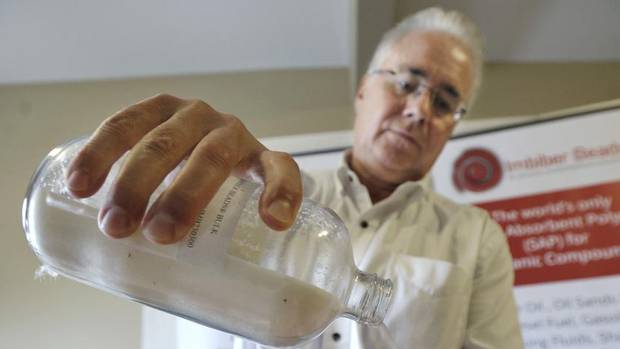 OILMAN: I was very intrigued when I first read about IMBIBER Beads and watched your demonstration videos online. It’s very innovative and I feel it could revolutionize spill clean up and prevention within our industry. So tell us about IMBIBER Beads?

John Brinkman: Imbibitive Technologies is a specialty absorbent manufacturer, our flagship product is known by the brand name Imbiber Beads. The word ‘Imbibe’ and ‘Absorb’ are synonyms, there’s a lot of confusion in the marketplace as to what an absorbent actually does. Most of the products on the market that are commercially available are surface coating materials and are by ASTM International Performance Standard definitions ‘aDsorbent’ that’s ‘D’ as in dangerous especially if you’re dealing with things like fuels and solvents. The IMBIBER Beads were originally invented by The Dow Chemical Company and specifically by my former partner Dr. Richard Hall. Unfortunately, Dr. Hall passed away a couple years ago, but part of his legacy was the invention of the only oil sensitive, superabsorbent polymer currently available anywhere in the world today. Dick Hall invented IMBIBER Beads roughly in 1968, which was a little bit after the time that a fellow by the name of Victor Mills invented the first water sensitive, superabsorbent polymer, which later went on to become the brand name “Pampers” and revolutionized the personal hygiene industry with disposable baby diapers.

OILMAN: How do Imbiber Beads work and how can they be applied to the oil and gas industry?

John Brinkman: We happen to think that IMBIBER Beads should have the same impact on the oil industry in revolutionizing the way that oil spills are dealt with the way that oil releases are prevented from entering the environment and have endeavored to incorporate the properties of the IMBIBER Beads into a number of spill response and pollution prevention applications. How the beads differ from the surface coating materials is that the liquid physically diffuses into the polymer structure. If you can visualize a salt or a sugar granule it’s approximately the size of the IMBIBER Beads and the liquid diffuses into the beads by swelling two the three times their original size. What this really implies is a tremendous thirst. If you’ve seen any of the commercials on television for personal hygiene products they’ll say that the water sensitive products will pick up a tremendous volume of water, the beads do the same thing, but are unaffected by the water, they’ll only react with a wide range of organic liquids such as crude oil, gasoline, benzene, ethylene styrene, PCB’s. Once the liquid goes into the IMBIBER Beads, it becomes part of the structure of the IMBIBER Beads and can’t be re-released through compression or even if you were to grind them up and try to get them to release their contents – the polymer and the liquid have integrated and become one material.

OILMAN: Aside from IMBIBER Beads’ application during an accident clean up, it sounds like there is also an application to reduce the risk of hazardous vapors at an incident site?

John Brinkman: Good question, if you use the example again of the disposable baby diaper, those polymers are engineered to absorb water and within a short period of time the fabric is dry to the touch and hopefully that keeps your baby’s bottom dry and free from rashes and infections. With the Imbiber products, they work the same way they illuminate the liquid phase, in other words, the liquid is no longer available for re-release so in doing so you’re illuminating secondary contamination. If you’ve ever tried to pick up a polypropylene pad, for example, that’s been saturated with diesel fuel or gasoline simple gravitational pull causes it to re-release the amount of its contents. With the IMBIBER Beads that can’t happen, so that makes it safer for response personnel to clean up spills. And the other issue is very important, by illuminating the liquid phase; we reduce the rate at which vapors are released. Through independent third party testing, the IMBIBER Beads have demonstrated their ability to reduce the concentration in the air to below the lower explosive limit in many, many instances. So that’s a huge occupational and safety consideration for utilizing IMBIBER Beads’ unique performance properties.

OILMAN: Environmental and safety issues are very important to everyone in the oil and gas industry. How can a company implement IMBIBER Beads as part of their safety strategy?

John Brinkman: The easiest step is to just Google IMBIBER Beads, visit our website or call our toll free number 888-THE-BEAD. And whether someone has a particular issue like spill response, pollution prevention or specialty application we’re available to address those. I think we can demonstrate a level of expertise; we take great pride in our technical accuracy. Our scientists are all former Dow Chemical scientists and engineers so once we know what the chemical properties of the liquid in question are we can go back to the science team and explain what the properties are and what the issue might be and then customize solutions based on that. In many instances, we’ll know within a relatively short period of time. We also have another generation of products we’re working on as well that will increase our surface area by as much as 30 million times the size the beads are today.