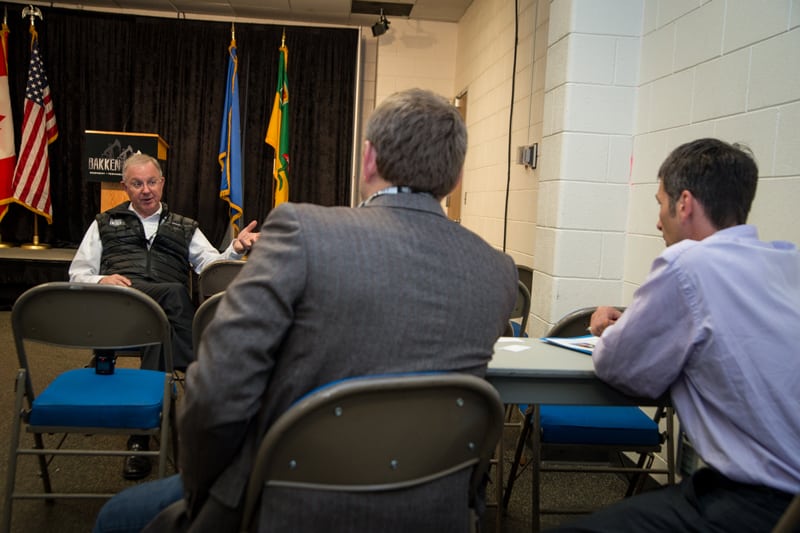 Tom Petrie is the Chairman of Petrie Partners LLC, an investment firm offering financial advisory services to the oil and gas industry. Prior to joining Petrie Partners as chairman in 2012, Petrie was vice chairman of Bank of America Merrill Lynch. Previously, he was co-founder of Petrie Parkman & Co., an energy investment banking firm based in Denver and Houston that merged with Merrill Lynch in December 2006. Petrie was also a former managing director and senior oil analyst of The First Boston Corporation.

During his career, Petrie has been an active advisor on more than $200 billion of energy-related mergers and acquisitions, including a number of the larger mergers in the energy industry. He provided advisory roles to the Kingdom of Saudi Arabia on its natural gas initiative, the state of Alaska on gas pipeline options and the U.S. Department of Energy on the sale of the Elk Hills oilfield.

An active member of several industry associations, Petrie is a past president and member of the board of directions of the National Association of Petroleum Investment Analysts as well as others. Additionally, Petrie has been interviewed by Barron’s, CNBC, Bloomberg, Fox News and PBS. He has also authored the book Following Oil: Four Decades of Cycle-Testing Experiences and What They Foretell about U.S. Energy Independence.

Q: Can the U.S. really compete with OPEC in terms of oil production?

A: Whether there is even a need to compete will probably depend on the overall rate of growth in world oil consumption. At the moment, demographic trends still indicate that significant growth in global demand over the next several decades is likely. If rates of demand fall short of expectations, there could emerge a degree of competition between the U.S. and OPEC countries.

A: I believe North Dakota’s recent emergence as the second largest U.S. producer along with other plays in Texas, like the Eagle Ford and Permian Basin, Colorado (Niobrara) and Oklahoma, the Lana Woodford and possibly the SCOOP, do represent a much-welcomed improvement in America’s energy security position.

It is important to note that total barrel-for-barrel independence is neither necessary nor even optimal for establishing oil security.

Given the varying characteristics of different types of oil, some experts to the world markets alongside imports of oil better suited to U.S. refinery needs is probably optimal.

The benefits to the overall U.S. strategic position in terms of a reestablishment competitiveness in manufacturing and creation of higher paying, sustainable jobs are also significant. Finally, there are likely net positive environmental benefits from the overall shale revolution due to the growing role of natural gas, both associated and dry, and the proximity of production to consuming markets. For example, these factors indicate lower emission associated with transportation of fuels.

Q: What does domestic production in shale plays mean to energy prices?

A: As indicated in my prior remarks, all U.S. unconventional oil development is price-sensitive. If available oil supply were to exceed demand, prices would come under pressure. In that case, the U.S. will still be an importer of oil throughout this decade under most scenarios. Thus, proximity to markets would probably provide an advantage over domestic sources. On a longer-term basis, the growing availability of shale oil production could tend to dampen the volatility of oil prices.

Q: Why is energy so popular?

A: We are at a major inflection point regarding the interrelationship of developing the energy supplies needed for global economic growth versus legitimate environmental considerations. Technological advances in communications and rising economic aspirations around the world necessitate a focused and rational assessment of strategies to meet these human needs. Only a decade ago there was rising fear of a global peak in conventional oil output. That has now been meaningfully postponed by the revolution in developing unconventional fossil fuels. However, it will be critical to pursue these new sources wisely while evaluation and validation of alternatives involving renewable sources continues to advance over a realistic timeframe.

Q: Why is discussing developing energy supplies so often polarizing?

A: There are clear environmental impacts from virtually all new project developments. Introduction of greener energy solutions on a cold-turkey basis can involve disruptions and inefficiencies that need to be well-understood. Some advocates of a changing energy mix appeal to asserted fears involving new projects as opposed to fact-based and rational analysis. The stakes are large and the economic consequences are sufficiently impactful that reasoned judgments become crucial.

Q: What are some of the important historic events that have affected the energy industry?

A: In my book, I draw from my four-decade career in the energy industry. The historic events surrounding the rise of power of the Organization of Petroleum Exporting underscored the central role of energy in the national security calculus of the U.S. and its western allies. Concurrently, the emerging confrontations over development of Alaskan North Slope oil and the pioneering effort to tap large North Sea oil discoveries were used as case studies for assessing the effectiveness of capitalism in energy development on a national and even global scale. In subsequent periods, that theme became powerfully reinforced as we experienced waves of mergers, several Middle East wars, oil and stock market collapses, and impressive entrepreneurial responses to changing economic incentives. As a participant in and witness to these incidents, I think there are lessons that can be learned from such events.

Q: What does domestic production mean to foreign affairs and politics?

A: As I outlined in my book, energy dependence has periodically significantly hampered U.S. flexibility in foreign affairs and international politics. The price of oil has historically been driven by geopolitical events. This has been especially true since The Yom Kippur War of 1973. In subsequent years, the Iranian Revolution of 1979, the Iran/Iraq War of 1981 through 1988 and the invasion of Kuwait in 1990 all demonstrated the impact of geopolitical drivers on the petroleum sector. If utilized wisely, the new era of growing domestic supply prospects should significantly facilitate America’s leadership in fostering global and economic stability.

Q: Do you see a future where natural gas is traded at a global price

A: The connectivity of the U.S. to the international market should have some effect at bringing down the margin prices, but, I am not sure it will be full conversion. I do think it will, however, have a benefit. Because what is going to happen is the Chinese are a lot more interested in buying gas here and delivering it into their system, than buying $15 gas, because it’s much more inflation. So there is going to be a real dynamic there. That depends on several things happening. I was down at the Panama Canal in June of 2013, and the Panama Canal project looked like it was going to get hung up, but once the new Panama Canal comes online we are going to be talking about a much greater connectivity of U.S. gas into the market.

Q: Where do you see energy heading?

A: While I have addressed many of the challenges I see in developing new energy supplies, I find myself perversely positive about the future, especially for the U.S. After four decades in which the U.S. has endured a large structural trade deficit due in part to rising oil imports and prices, we are now positioned to experience a very significant – but perhaps not total – reduction in oil import dependence. We have learned much from our past mistakes and are now capitalizing on recent technological advances. Also, if used effectively, natural gas can provide a much- needed multi-decade transition to a new energy future. In sum, we have much- improved optionality for meeting our upcoming energy needs.