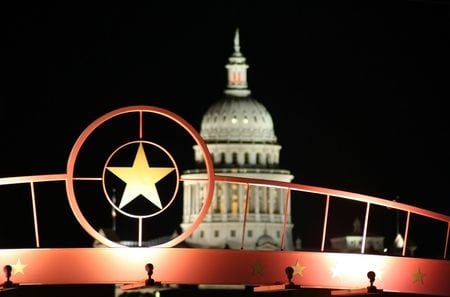 The big news among oil and gas circles in Texas last week was the announcement by the top regulator of oil and gas activities that he will not seek re-election.

David Porter, chairman of the Texas Railroad Commission, announced on Dec. 10 that he will not seek a second term, which surprised many because he had announced and filed for re-election as a Republican.

The Railroad Commission has regulated the oil and gas industry for about 100 years.

It has three commissioners who are elected by the people of Texas in statewide races for six-year terms, which are staggered so that one position is up for election every two years.

Porter had a Republican opponent in the March primary. Austin attorney John Greytok had already filed before Porter’s announcement. Since then, Gary Gates of Rosenberg, another Republican, has filed.

The Quorum Report, an Austin political newsletter, reported that State Rep. Jim Keffer (R-Eastland) said he is interested in seeking the office.

“I feel like we need to have someone who knows and understands the oil and gas industry running it,” Keffer said. Keffer has served as chairman of the House Energy Resources Committee, which has jurisdiction over oil and gas issues, and as chairman of the House Natural Resources Committee, which has oversight of other related issues including water.

Former General Land Commissioner Jerry Patterson, a Republican, has been rumored as a possible candidate.

The filing deadline is Dec. 14.

Porter was elected in November 2010 to serve a six-year term as Railroad Commissioner, and had a distinguished career at the RRC as conservative with free-market philosophy. He said he plans to serve out his term, which ends January 2017.

Porter has been appointed to the Interstate Oil and Gas Compact Commission as the Official Representative of Texas and currently serves as Second Vice-President of the organization. He is an advisory board member for the Texas Journal of Oil, Gas, and Energy Law. He also served as the Official Representative on the Interstate Mining Compact Commission from 2011 to 2014.

Upon taking office in 2011, Porter created the Eagle Ford Shale Task Force, the first of its kind at the Texas Railroad Commission, to establish a forum that brings the community together to foster a productive and forward-looking dialogue regarding drilling activities in the Eagle Ford Shale.

In 2013, Porter launched his Texas Natural Gas Initiative: a series of statewide events that bring stakeholders together to discuss business opportunities, challenges and regulatory barriers and solutions for natural gas conversion and infrastructure – focusing largely on the transportation and exploration and production sectors.

In recognition of his foresight and leadership, Porter was named “Man of the Year” by The Oil & Gas Year, Eagle Ford, Texas 2013. He has also been recognized by Shale Oil & Gas Business Magazine and Unconventional Oil & Gas Magazine for his proactive efforts to implement policies that allow industry to safely, efficiently, and economically produce the energy that is needed to support Texans and the Texas economy.