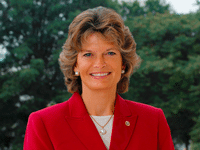 Sen. Lisa Murkowski (R-Alaska) during a June 9 U.S. Senate Energy and Natural Resource Committee hearing on energy accountability and reform legislation released a report in support of her bill to end the current ban on crude oil exports.

The report is “imminently readable,” Murkowski said during the hearing.

“It is factually stable and sound and really lays it out in a clean and forthright measure,” she said. “The report further develops an argument that I have been making: that even while Congress works to remove the export ban, the Administration already has authority, explicitly delegated to it by Congress, to allow for greater oil exports.”

Murkowski in mid-May introduced the Energy Supply and Distribution Act – Senate Bill 1312. The bill authorizes exports of all crude oil and condensate produced in the U.S. without a federal license and directs the U.S. Department of Energy (DOE) to create a standard definition of condensate. In addition, the bill authorizes DOE and the Department of the Interior to assess condensate separately from crude oil and affirms the Department of Commerce’s 2014 decision to treat processed condensate as a petroleum product, which may be exported without a license.

Speaking during the hearing on the issue of oil exports, Karen Harbert, president and CEO of the Institute for 21st Century Energy, said that U.S. supply in the world market will reduce both the world oil market price and volatility.

“Right now, we’re running out of storage, and we’re running out of opportunity to sell it here because our refining capacity is set up to refine the heavy oils that we have been importing for so long, and we’re producing the light sweet oil that other refineries around the world are set up to accept,” she said. “If we aren’t allowed to sell that and people stop producing, it has two effects – we will import more and we will see our own production slow down and our prices go up.”

Mark Mills, senior fellow at the Manhattan Institute for Policy Research, said during the hearing that there is a link between oil and natural gas exports and advancing infrastructure.

“Access to global markets will profoundly stimulate long-term and short-term investments,” Mills said. “If the United States took the posture of reorienting the foundational energy policy toward selling to the world – not becoming independent, but becoming a player on the world stage – this would stimulate profound reactions in the private sector, and if we did not constrain the private market ability to invest based on market access to buyers around the world, we would see an incredible increase in the building of pipelines and ports.”

In her report on oil exports, Murkowski said that the current administration retains broad authority to allow greater exports to U.S. allies that request exemptions from crude oil export restrictions.

“Substantial precedent exists for such exemptions to be granted, particularly to U.S. allies,” she said. “A national interest finding by the President could be implemented immediately by the Department of Commerce and exports could set sail as soon as the commercial and logistical arrangements were made.”