The positive impact of shale on U.S. energy production has been forecast for years, to the extent that many experts believe America could be energy independent soon and may become a net exporter of oil and gas. The U.S. Energy Information Administration (EIA) produced a report that supports this point of view, and the data in it may even give support to the case that energy independence is already in place or will be very shortly.

EIA’s new Drilling Productivity Report (DPR) describes traditional drilling methods as “obsolete.” These are the drilling methods that were considered, and still are in many cases, as the best in the world. However, the EIA reports that not only have the methods lost much of their usefulness, the number of operating wells needed to increase product will begin to drop. The authors of the DPR write:

With more than half of newly-drilled wells now producing both oil and natural gas, it is also no longer sufficient to categorize rigs as either oil-directed or gas-directed.

Like traditional measures, the DPR makes use of recent rig activity data, but also explicitly considers recent information on wells drilled per active rig (rig productivity), average oil and natural gas production rates from new wells during their first full month of operation, and estimated changes in production from existing wells to develop estimates of overall changes in production for each region. EIA’s approach in the DPR does not distinguish between oil-directed and gas-directed rigs — it counts all active rigs — because once a well is completed, it may produce both oil and gas. Because production data reported by states can be significantly lagged, DPR uses the rig count data along with trends in drilling productivity to make estimates of oil and gas production where data are not yet available.

The report will make the debate over fracking and the Keystone XL Pipeline more intense. There are no longer any powerful arguments that production of shale oil and gas is not sufficient to justify blocking these methods of production and transportation. The DPR authors report that among their most important findings:

Increases in drilling efficiency and new well productivity, rather than an increase in the number of active rigs, have been the main drivers of recent growth in domestic oil and natural gas production.

The Bakken and Eagle Ford regions together account for about 75% of current monthly oil production growth across the six regions tracked in the DPR. Over the past year, production in these two regions increased by nearly 700,000 barrels per day. The Permian region, which remains the biggest absolute oil producer, grew by about 93,000 barrels per day from last year’s production level.

Although natural gas production increased in four of the six DPR regions over the past year, the Marcellus alone accounted for about 75% of natural gas production growth in the six regions. The only things that can stop this movement toward U.S. energy independence are objections to fracking and the pipeline. The case for supply has already been made, and made forcefully. 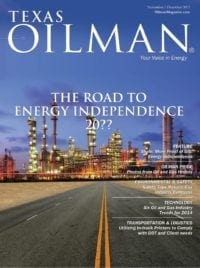