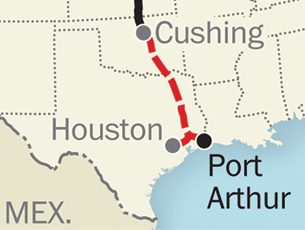 A new study claims that a just-built 485-mile stretch of the Keystone XL pipeline has been a huge economic boon for two dozen rural and poor Oklahoma and Texas counties—and will create the same significant impact in five other states if the project’s long stalled northern segment ever wins White House approval.

As the debate rages over the future of the $5 billion mega-project, a team of university researchers has released a report showing the economic benefits of Keystone’s Gulf Coast Pipeline, which just opened in January after 17 months of construction, linking Cushing, Okla., and Nederland, Tex.

The study by the Maguire Energy Institute at Southern Methodist University says the pipeline has pumped $3.6 billion into the Texas economy and $2.1 billion into the Oklahoma economy while creating thousands of jobs directly and indirectly. It has also boosted tax revenues by millions of dollars, according to the study. “Similar state and local economic benefits can be anticipated should the United States give the go-ahead for construction of the Keystone XL pipeline from Hardisty, Albert, to Steele City, Neb.,” the report concluded.

TransCanda Corp. spent $2.3 billion to build the Gulf Coast Pipeline, which generated nearly 5,000 construction jobs. The firm spent $6 million each month, the study said. “Local restaurants, hotels, and businesses experience a significant boost thanks to the construction of the Gulf Coast Project,” the report said.

The study’s author, Bernard Weinstein, told FoxNews.com the governments in the 24 counties the pipeline crosses collected more than $72 million in tax receipts as a result of the pipeline. “These are small rural counties, and they are also low-income counties, so this project was a real shot in the arm for them,” he said.

The report was commissioned by the Consumer Energy Alliance, a proponent of the Keystone project. Members of the alliance include some of the world’s biggest energy firms, such as Exxon Mobil, BP and Shell Oil. “These are real numbers,” Michael Whatley, the group’s executive vice president, said in an interview with FoxNews.com. “What it shows is the construction of the southern half has been immensely helpful and the economic impacts in those counties are very real.”

But a pipeline opponent from Nacogdoches County in East Texas wasn’t so sure the numbers were real. “This report feels inflated,” environmentalist Vicki Baggett of the group NAC STOP told FoxNews.com. “Our message is the tar sands pipeline poses a danger to the health and safety of our community, which I think is more important than any economic gain there might be for the county.”

Alec Johnson, of Tar Sands Blockade, an environmental group based focused on the Gulf Coast, said oil companies are guilty of distorting the purported economic benefits of their business and said the study is an example of that. “It makes no mention of the fact that the fossil fuel industry spews 98 million tons of carbon dioxide into the atmosphere every day, treating out vital public commons – the atmosphere – as an open sewer,” Johnson said. “They pay nothing for that.”

Three phases of the Keystone Pipeline system have been completed. The fourth phase, which has caused the most controversy, needs President Obama’s approval because the project crosses Canada. In April, the White House said it was putting off a decision indefinitely. A decision is now not expected until after the mid-term elections in November. The project was announced in 2008.Supporters say Keystone will create jobs and increase energy independence. They also say it will reduce safety concerns because shipments of crude oil won’t have to be carried by rail. Opponents warn of possible spills and say production of the Canadian tar sands oil will contribute to global warming. Construction of the Gulf Coast Pipeline began in August 2012. The pipeline will have the initial capacity to transport 700,000 barrels of oil from underground storage tanks in Cushing to Gulf Coast refineries.