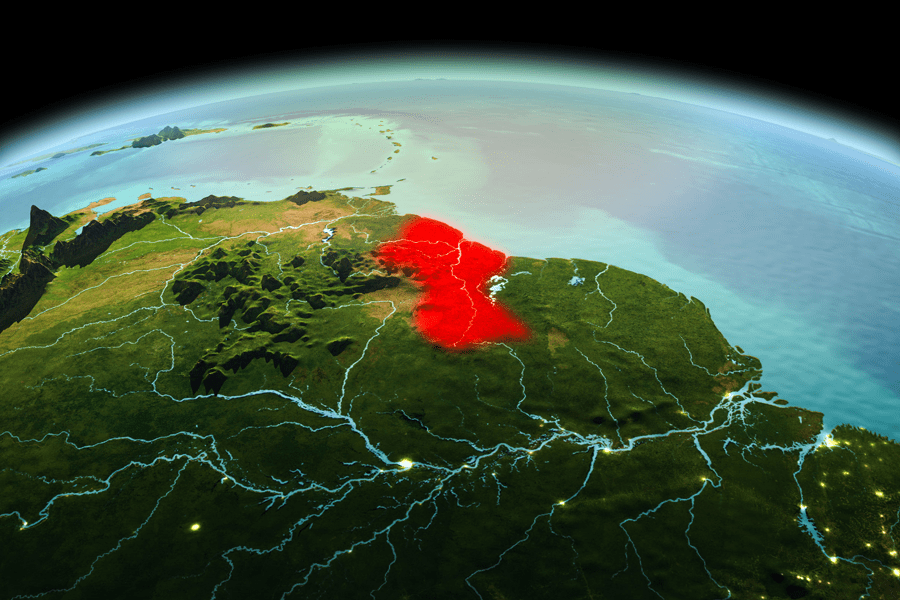 ExxonMobil won the prize. The greatest offshore oil discovery in recent decades was secured by the world’s largest exploration and production company in May 2015. The windfall for the oil giant is also a fortune for the people of Guyana, a former Dutch and British colony at the north-eastern tip of South America. The tiny country’s neighbor is Venezuela, itself rich in oil reserves, so there is no surprise Guyana shares the same luxury.

In December 2016, the Venezuelan Navy intercepted an exploration vessel conducting seismic survey work on behalf of ExxonMobil. The Venezuelan government insisted that the ship was within its territory and had every right to approach the vessel during a routine patrol. The Norwegian-owned vessel with 70 crew members from various nations stopped the exploration and headed back to safety. Guyana officials insisted that the vessel was operating in its economic zone and Venezuela was violating the sovereignty and territorial integrity of its country.

The offshore spat goes back to a longstanding land dispute. In 1899, Venezuela agreed to relinquish control of the Essequibo region, a dense jungle area that is sparsely populated. The dispute increased over the years when ExxonMobil announced the oil discovery, which was a windfall for Guyana with no significant history of oil production. Suriname also claimed a section of Guyana’s territorial sea that was settled in 2007.

Guyana always had the potential to strike oil; however, for decades, explorers drilled dry holes. The financial risks involved in offshore exploration are tremendous. Royal Dutch Shell pulled out of the partnership during the 2014 oil price crash. It has been a long road for ExxonMobil, first signing a production sharing agreement with Guyana in 1999. With previous unsuccessful exploration attempts by competing oil producers, territorial disputes, and the oil price crash, ExxonMobil persevered, discovering an estimated four billion barrels of oil in the Stabroek block, 125 miles off the Guyana shore. Shell, Total, and other major oil producers have completed oil discoveries off the coast and drilled a number of wells, but nothing even close to this magnitude.

In a partnership with Hess, with 30 percent interest, CNOOC, also 30 percent interest, and ExxonMobil, with 45 percent interest, the oil giant drilled its first well, Liza, followed by several more wells. The subsequent well discoveries increased reserves to eight billion barrels of oil equivalent in the 6.6-million-acre block. The Liza 1 development is expected to start this year and produce up to 120,000 barrels of oil per day using a floating production storage and offloading unit (FPSO). Liza Phase 2 has been approved for development by the Guyanese government and is expected to start in mid-2022, also using an FPSO to produce 220,000 barrels per day of oil. There are numerous drill ships in the block studying the basin with a possible third development, Payara, coming online in 2023.

Guyana exported its first crude cargo earlier this year headed for the U.S. Gulf Coast for refining in the ExxonMobil network. The Yannis P vessel loaded light sweet crude from the offshore FPSO, marking the country’s long-awaited debut as an oil exporter. Shell is also back in the partnership. Guyana awarded the company the right to cargo three vessels of crude and the government plans to open bidding for a marketing agent to trade and export its share of production.

Will Guyana be ready to manage the historic windfall it now has in its lap? Many still ponder at the thought. Some think they will end up mired in corruption like oil producing nations in Africa, such as Angola, and even Guyana’s neighbor Venezuela. “Guyana really is a country at risk,” said David Goldwyn, president of Goldwyn Global Strategies.

Yet others think Guyana has the opportunity to prove that, as a developing nation, it will be able to manage and prosper with its newfound national treasure. “Guyana is going to need a small, tight team of people making decisions in a timely way; they’re not there yet,” Goldwyn said. The Guyanese government has slowly implemented measures, such as forming the State Asset Recovery Agency (SARA) to stamp out corruption and watch over the country’s prized offshore leases.

There are now several companies from around the world with wide-eyed interest in exploring for oil in offshore Guyana with hopes of the next big discovery. Guyana has approved several offshore leases and now that interest is high, officials in government have signaled Guyana did not get the best tax and royalty rates in the lease deal with ExxonMobil and subsequent oil companies.

Guyana will take 60 percent of the oil profit and is estimated to receive $5 billion in oil revenue per year by 2025. The government in the small developing nation of 778,000 citizens set up a sovereign wealth fund to manage the incoming revenue, but has not identified plans on how to spend it. Goldwyn mentioned, “Today, they have the per capita income of Tonga, but by 2024, they’ll have the per capita income of Brazil, a country whose population dwarfs Guyana’s by over 200 million people.” Goldwyn notes, if the right team is in place, Guyana will be successful and emphasized, “If not, and I hope this is not the case, in ten years we’ll be talking about how hard it is for countries with resource wealth to turn that into real prosperity.”

Guyana potentially becoming the region’s richest petrostate has a lot at stake. The country’s department of energy has an annual budget of $2 million, very modest compared to its neighbor. Goldwyn states that job number one is a fiscal rule that must be in play where a certain amount of money will go into the budget and the rest into a fund. Guyana will receive $300 million the first year and $100 million will go to the budget and $200 million into the sovereign wealth fund. “Accountability is job two and anti-corruption is job three,” Goldwyn says. If managed correctly, the oil bonanza could transform Guyana into a new global player in fossil fuel production for decades to come.