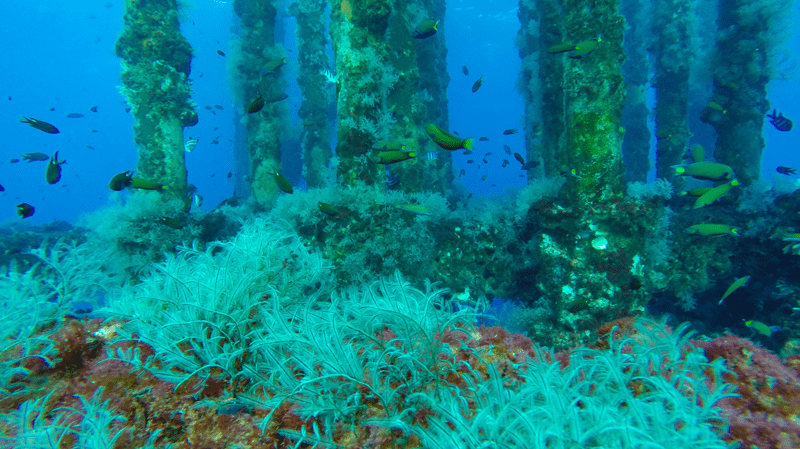 In our oceans stand hundreds of massive oil rigs and platforms. While many of those oil rigs produce millions of barrels of oil, there are many other oil rigs that have been abandoned. In the Gulf of Mexico, alone, sits 27,000 abandoned oil rigs. With many abandoned oil rigs in the sea, there has been much debate about what is the best way to handle them. Although there are many ideas for how abandoned oil rigs should be handled, one of the most popular, yet often controversial ideas, is to transform them into artificial reefs.

Turning rigs into reefs can provide many benefits to marine ecosystems, with marine life gaining additional homes. Blue Latitudes, an environmental consulting firm that provides ecological solutions for the offshore industry, has been engaged in the process of transforming rigs into reefs through decommissioning processes. Their mission is to provide an alternative, eco-conscious solution to the complete removal of oil rigs by utilizing reefing. Through reefing, they plan to support ecologically valuable ecosystems while promoting the economic benefits to state and oil company stakeholders. Emily Hazelwood and Amber Jackson, co-founders of Blue Latitudes, shared the ins and outs of their “rigs to reefs” project, how reefing has progressed, and why it should be greatly considered in decommission initiatives, as opposed to the complete removal of oil infrastructures.

Hazelwood and Jackson expressed how decommissioning in the deep sea has presented new challenges to the traditional methods of complete removal and has ultimately forced the industry to seek an alternative, such as reefing. “In order to entertain the potential to reef infrastructure in deep water environments, the ecological impacts and long-term sustainability of these structures will need to be addressed, developing new industry standards for deep water decommissioning,” explained Hazelwood and Jackson.

Hazelwood and Jackson were then asked why it is important to consider reefing in decommissioning projects. They explained that with the considerable expense and technical challenges attributable to decommissioning, advanced and effective planning for decommissioning, that includes a reefing option, may ultimately benefit oil and gas stakeholders financially. “Selecting a decommissioning option, like reefing can help streamline the platform removal permitting process, address health, safety, and environmental concerns, and serve to better align the oil and gas industry with regulatory and public stakeholders,” expressed Hazelwood and Jackson. Hazelwood and Jackson further described how some platform-type reefs support a permanent, fouling sessile community, which is critically important to the surrounding fish community, providing both food and shelter. “The fouling community can contribute a constant stream of organic matter to the base of the platform at the seabed, laying the groundwork for greater habitat diversity and energy transport within the platform ecosystem,” Hazelwood and Jackson further explained.

Hazelwood and Jackson were then asked about their “rigs to reefs” project and how they ensure it is handled properly. They explained that establishing a platform-specific ecological baseline is critical when collecting evidence of the potential immediate and long-term ecological value to the marine communities when decommissioning platform structures. “The most effective way to evaluate the ecological value associated with oil and gas infrastructure is to develop a baseline understanding of the associated marine life through a combination of available scientific and observational data, and planned biological surveys,” explained Hazelwood and Jackson. As Hazelwood and Jackson further explained, rigs and platforms that are transformed into reefs can help marine populations mix and reproduce, thus increasing genetic diversity which can help fish and coral species become more resilient to changes in the marine environment.