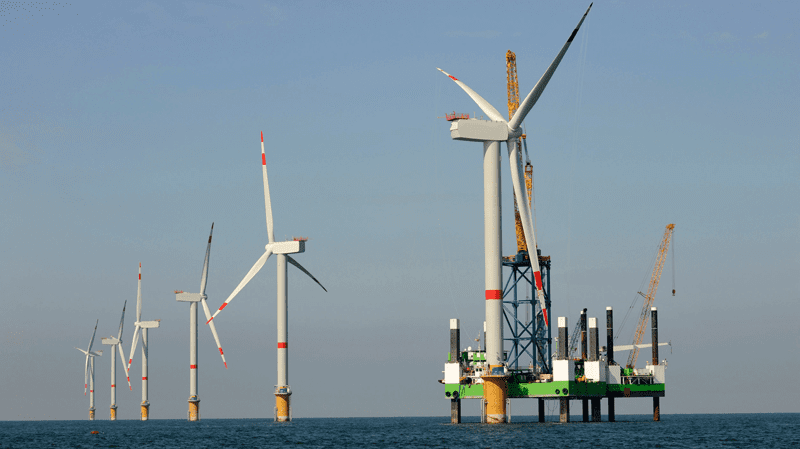 Offshore wind is new to the energy party. The first offshore wind farm was installed off the coast of Denmark in 1991. Less than three decades later, the industry is making big waves – and starting to turn big profits.

Capacity is ramping up quickly and cost is dropping fast. Europe increased offshore wind capacity by 18 percent in 2018 alone. Cost per MW (Megawatt) has dropped 75 percent since 2014. The offshore wind farms are getting bigger and more prevalent. Partnerships big and small are transforming the industry. It’s no longer a question of if and when offshore wind will become viable. It’s viable now.

It is Danish company Ørsted that is the model for oil and gas companies. In 2010, Ørsted (formerly DONG Energy) made the decision to transition to renewable energy. Now 70 percent of its generation is from renewables. Its goal is to increase renewables to 90 percent by 2020. This is not pie-in-the-sky: They now own 50 percent of the largest offshore wind farm in the world. Walney Extension can generate up to 659 MW with 87 turbines located in the Irish Sea. Nearly 600,000 U.K. homes are powered by Walney.

United States is The Next Big Thing

The first offshore wind farm in America, Block Island, proved that it’s worth investing in offshore wind in the United States. Three European companies each shelled out $135 million for offshore leases 20 miles off the coast of Nantucket in Massachusetts. One of the winners, Norwegian company Equinor, a major oil and gas company who changed their name from Statoil last year. In fact, it was Equinor who bested itself: It had paid the then record amount of $42 million for 80,000 acres off New York’s coastline just two years’ prior.

Massachusetts has a goal of 1.6 GW (Gigawatts) by 2027. However, the American Wind Energy Association believes that the three leases will ultimately provide at least 2.4 GW of wind power. Construction on the wind farms is a decade away.

New York also has an ambitious goal: The state is targeting 2.4 GW by 2030. But they are also tasked with lowering the cost of offshore wind for the whole country. The U.S. DOE (Department of Energy) selected New York to head up a consortium focused on offshore wind. They will allocate research and development funds to projects that move the United States toward responsible and affordable offshore wind generation.

RCEA (Redwood Coast Energy Authority) and Castle Wind, have proposed floating wind projects in California. The state’s goal is to derive its energy from 100 percent carbon-free sources. “California’s coast offers some of the highest wind resource potential in the country, and offshore wind could produce more than 1.5 times the electricity the state currently uses in one year,” said Arne Jacobson, Director of the Schatz Energy Research Center.

Offshore wind is being harnessed around the world. Many countries, including South Korea, Japan, China, and India are implementing or researching offshore wind projects.

Equinor is working with Korea National Oil Corp (KNOC) to evaluate offshore wind in South Korea. Their goal is to increase the country’s renewable power to 20 percent of total generation by 2030.

Japan has a more pressing problem. Since the 2011 Fukushima Daiichi Nuclear Power Plant disaster, only nine of the country’s 40 nuclear power plants are online. To help bridge the impending energy gap, Tokyo Electric Power Company has signed a Memorandum of Understanding (MoU) with Ørsted to develop offshore wind projects. Energy analysts Woods Mackenzie estimate up to 4 GW online by 2028.

China’s top oil exploration company, CNOOC Ltd., signed on at the beginning of this year to develop its first offshore wind project in Jiangsu province.

Offshore wind is benefitting greatly from the myriad of experts in the oil and gas industry.

The Gulf of Mexico has the potential to generate a massive amount of offshore wind energy.

Gulf states could generate up to 961 TW (Terawatt) hours of electricity per year. Texas, Louisiana, and Florida are most promising. Winds are mild, but very steady. Shallow waters would make turbine installation and maintenance easier, but must be built to withstand hurricanes. The infrastructure and supply chain already in place for oil and gas could possibly be leveraged for offshore wind.

Offshore wind in the Gulf could become a reality with the help of non-profits like the Business Network for Offshore Wind. Their mission is to work with U.S. companies and talent pulled from the oil and gas industry to build a new supply chain for offshore wind energy.

It’s not just the federal government who wants to invest in offshore wind. Wall Street saw the value of investing in renewable energy long before talk of the “Green New Deal.” Sustainable investment is a $12 trillion market in the U.S. $600 billion green bonds were issued last year.

Offshore wind development is taking off in the United States and around the globe. The money, the talent, and the will to make it happen are in place. Even those companies that lagged behind are picking up the pace and the oil and gas industry will ride the winds of change to big profits.