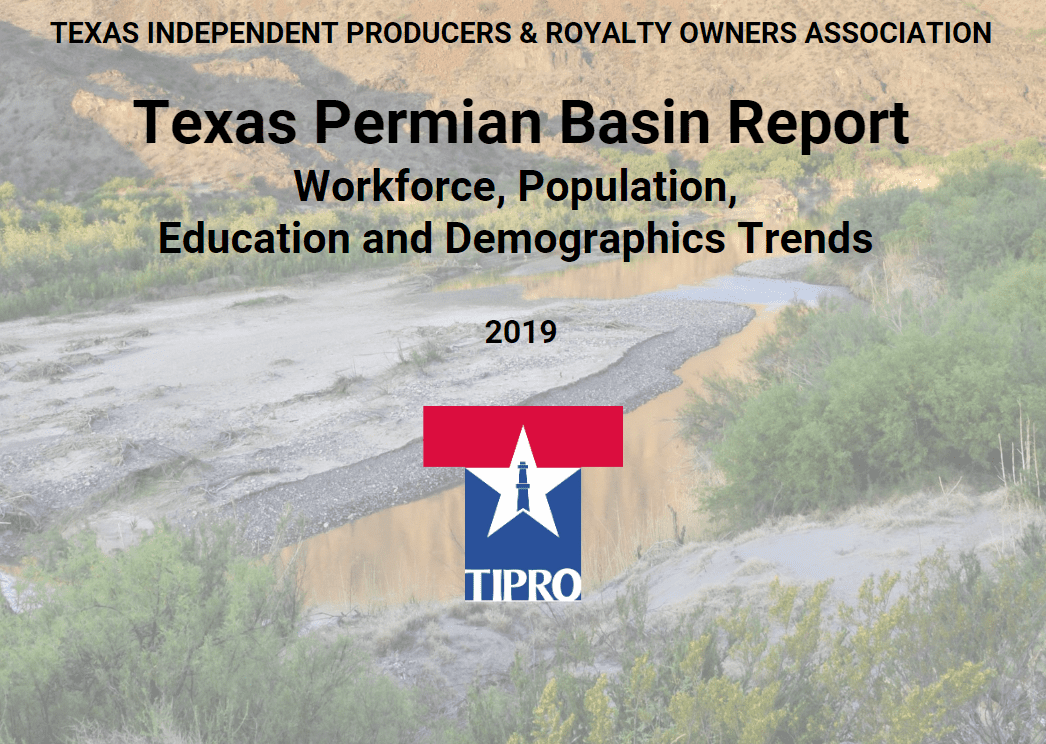 Austin, Texas – While energy development in the Permian Basin continues to skyrocket, a new report by the Texas Independent Producers & Royalty Owners Association (TIPRO) takes a closer look at population, education, workforce, and demographic trends across multiple business sectors in the oil-and-gas rich region that spans across West Texas. In the past five years, communities situated in the heart of the Permian have experienced tremendous growth in population, as drilling in the nearby oil patch draws in new workers. TIPRO estimates that the overall residential population in the Permian grew approximately 3.3 percent between 2013-2018. Industries related to the energy sector – including oil and gas extraction, pipeline transportation and other support activities for mining – offer some of the strongest employment rates for those living in the Permian, though other industries like health care, retail services and construction also provide substantial levels of employment to residents in the area, TIPRO’s report also shows.

“Today, the Permian Basin is one of the world’s top oil-producing regions. In just the past five years, oil output in the region has more than doubled. The growth of the oil and natural gas industry brings enormous opportunity and benefit to the Permian Basin, but that growth can also put a strain on infrastructure, education, health care and other areas essential to supporting the region and state across all industry sectors,” said TIPRO President Ed Longanecker. “Unique challenges also arise during a market downturn, something West Texans know all too well. Monitoring trends in the Permian Basin region is important in understanding the market factors that impact the economy and our fellow Texas citizens, as well as to further quantify the importance and influence of the oil and natural gas industry for our state and country.”

TIPRO’s new analysis also shares insights on the education pipeline coming out of this vast portion of the state. The next generation of graduates from the Permian will hold an important role in serving the workforce needs that allow Texas to fully capitalize on the opportunities presented in the Basin. In 2017, there were approximately 34,555 graduates in the Texas Permian Basin region. This number has grown by 2 percent over the last five years. The highest share of these graduates came from the following disciplines: Liberal Arts and Sciences/Liberal Studies, Registered Nursing/Registered Nurse, and Medical/Clinical Assistant.

Other highlights from TIPRO’s Permian Report include:

TIPRO produces regular reports analyzing priority policy and economic issues facing independent oil and gas producers and royalty owners. The association combines decades of industry experience with data and analysis to educate the general public, industry and elected officials on the unprecedented economic contributions of the E&P sector at the local, state and federal levels. Key areas of focus include: education of operations, workforce development, industry employment and wages, innovations and technological advancements and energy policies. For additional information on the oil and gas industry, including employment figures and other oil and gas insights, be sure to also review TIPRO’s other reports at www.tipro.org.