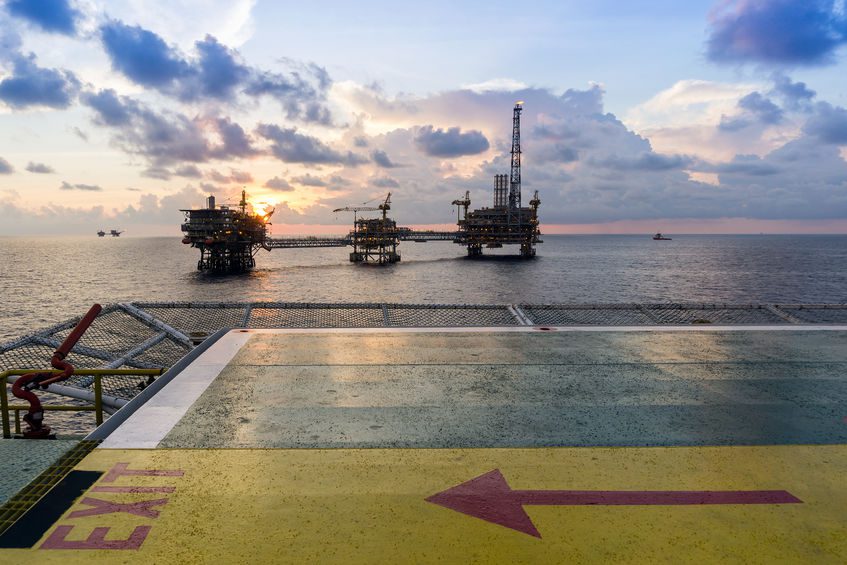 As we wind down 2018 and turn our attention toward year-end disclosures, it is helpful to review U.S Securities and Exchange Commission (SEC) comment letter trends to improve financial statement disclosures and identify potential deficiencies. As shown in the chart below, during the last 12 months, the SEC staff issued approximately 100 comments on disclosures made in Forms 10-K and 10-Q to 24 upstream companies. Here, we examine the most common comments received and offer suggestions for best practices for preparing year-end disclosures. We are often asked to assist our clients in drafting and reviewing footnote disclosures, as well as responding to SEC comments. 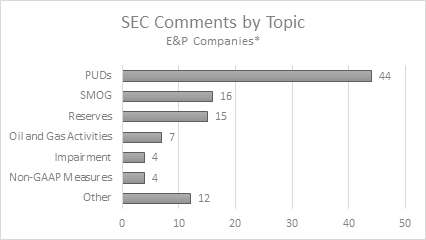 It is not surprising that most SEC comments, approximately 45%, focused on PUDs, since they are a primary driver of an upstream company’s value. Most comments concerned PUD conversion rates. The SEC staff questions the legitimacy of PUDs when historical conversion rates do not appear to support future development of PUDs within the required five-year timeframe. The SEC staff also questioned unexplained differences in year-over-year planned versus actual results that indicate changes in or (perhaps) a lack of a formal development plan for PUDs.

Remember that a commitment to a development plan should be specific and not based only on intentions. A final investment decision includes assessing the funding for such projects and should be approved by management.

Comments on disclosures of changes in SMOG primarily related to failure to adequately describe and categorize changes in reserve quantities as required by ASC 932-235-50-5.

Ensure disclosures of changes in reserve quantities include the categories listed in ASC 932-235-50-5 and drivers of each change are adequately described. Categories should not be aggregated.

For changes in reserves related to revisions, separately disclose any significant factors that contribute to the overall change, including positive and negative revisions that offset. The disclosure of revisions should identify such factors as changes caused by commodity prices, well performance, unsuccessful and/or uneconomic proved undeveloped locations or the removal of proved undeveloped locations due to changes in a previously adopted development plan.

Comments related to oil and gas activities address deviations from the disclosure requirements of Item 1200 of Regulation S-K. The SEC staff issued comments to three registrants questioning whether disclosed “resource potential” met the definition of reserves. Another comment issued to multiple registrants related to failure to adequately disclose production by final product sold.

Re-examine Item 1200 of Regulation S-K and consider if all disclosure requirements contained therein are met.

In its comments on impairments, the SEC staff asked registrants to disclose in Management’s Discussion and Analysis (MD&A) risks and uncertainties associated with the recoverability of assets and requested that registrants inform them about methods and assumptions used in impairment tests.

For the last couple of years, non-GAAP measures have been a major focus area of the SEC staff across all industries. There is particular concern when those measures differ significantly from or are presented more prominently than GAAP metrics. Comments received by upstream registrants related to 1) omitting a reconciliation of the non-GAAP measure to the closest GAAP measure and 2) using titles for non-GAAP measures that are similar to those of GAAP measures.

Ensure the most directly comparable GAAP financial measure is given equal or greater prominence than the non-GAAP measure.

Provide a reconciliation to the most directly comparable GAAP financial measure, starting with the GAAP measure.

Twelve other SEC comments received relate to a range of topics, including commitments and contingencies, segments and major customer disclosures, among others. Because the filings reviewed within the sample period (September 1, 2017 to August 31, 2018) related to periods prior to the effective date of the new revenue recognition guidance in ASC Topic 606, “Revenue from contracts with customers”, there have been limited comments on the topic of revenue recognition; however, one registrant received the following comment:

You disclose on page 11 that in connection with your adoption, effective January 1, 2018, of ASC Topic 606 – Revenue from Contracts with Customers, you have determined, as of September 30, 2017, that the deferred gains recorded under the [Gathering and Processing Disposition] (as defined in Note 11 – Related Party Transactions) could be de-recognized under the new standard. Please provide us the analysis that you performed to support this determination, including the applicable ASC 606 paragraph references.

Here, the issue is that sales of certain equity method investments that formerly qualified as “in-substance real estate” under ASC 360-20, “Real estate sales”, will now be accounted for under ASC 860, “Transfers and servicing” (ASC 360-20 was superseded by ASC 606). If certain requirements are met, gains on sales that were previously deferred due to the continuing involvement provisions of ASC 360-20 may now be fully recognizable under ASC 860. Here is the registrant’s response to the SEC staff’s comment:

In response to the Staff’s comment, prior to the adoption of ASC 606, the sale of our membership interests in the [Gathering and Processing] equity method investments were accounted for under ASC 360-20 and deferred gains were recorded accordingly. As the deferred gains remain on the balance sheet, the contracts are “open” and are subject to potential changes in accounting treatment. In accordance with ASC 606-10-65-1 as it relates to ASC 860-10-15-4, following the adoption of ASC 606, sales of equity method investments will now be accounted for under ASC 860. While we are still in the process of deliberating and reaching a conclusion on the treatment of this transaction with our auditors, upon adoption of ASC 606, we expect the deferred gains to be de-recognized through an opening adjustment to retained earnings under the modified retrospective adoption approach. We anticipate reaching a final conclusion prior to filing the Company’s Annual Report on Form 10-K for the year ended December 31, 2017 and will disclose as such in our related filing.

In their Annual Report on Form 10-K for the year ended December 31, 2017, this registrant disclosed that they would de-recognize the deferred gain on the sale upon the adoption of ASC 606. We are aware of at least one other upstream registrant that de-recognized a deferred gain related to the sale of an equity method investment in “in-substance real estate” upon adoption of ASC 606. The guidance in ASC 860 is challenging and particularly difficult to apply to oil and gas transactions; therefore, we recommend that companies consult with their auditors and advisors when applying this guidance.  Depending on the facts and circumstances of the transaction, it may be advisable to preclear accounting for sales of equity method investments under ASC 860 with the SEC.

Amy Stutzman is a Managing Director in Opportune’s Complex Financial Reporting Group with eighteen years of experience in technical accounting and SEC reporting.  Amy leads teams that support executive management in understanding the structure and implications of complex transactions such as IPOs and acquisitions. She has strong technical skills and analytical ability and is the firm leader on all U.S. GAAP advisory matters.  Prior to joining Opportune, Amy managed the financial reporting group for Apache Corporation in Buenos Aires, Argentina, and was an audit manager in PricewaterhouseCoopers’ energy practice.