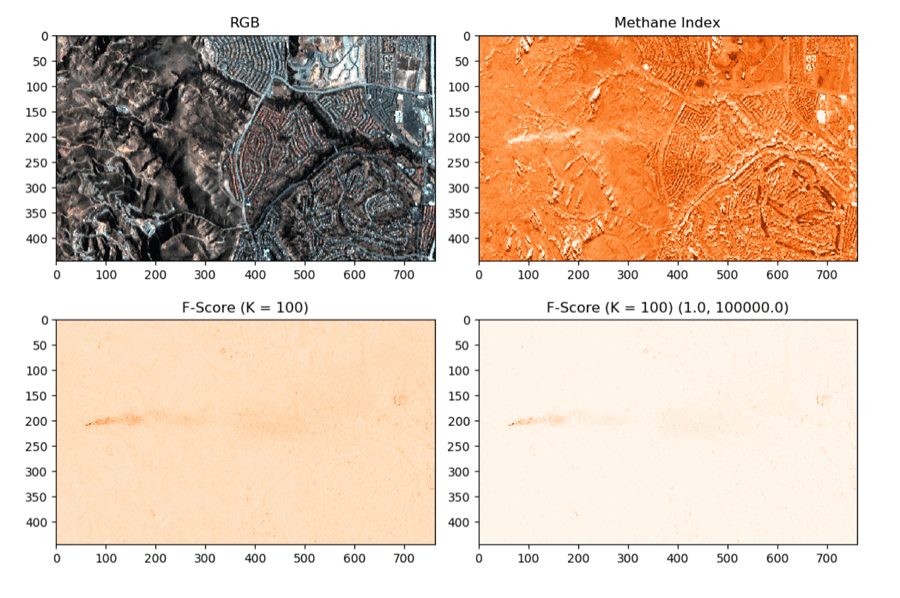 Orbital Sidekick (OSK) began from an idea sketched on a napkin in a bar in late 2015. The company’s co-founders were friends who had become frustrated with the bureaucracy at their employer, a traditional large-satellite manufacturing company in the Bay Area. They knew it was possible for a small team to build its own constellation of very small, relatively inexpensive satellites as this trend had already been shown by some other Bay Area startup firms. Instead of using their satellites to gather more visible imagery or radar-based data, Dan Katz and Tushar Prabhakar saw an untapped opportunity to bring the analysis of something called hyperspectral imagery (HSI) into the commercial marketplace. They began constructing their first prototype in Katz’s garage.

The Department of Transportation’s Pipeline and Hazardous Materials Safety Administration (PHMSA) requires operators of natural gas and hazardous liquid pipelines to routinely patrol these assets for evidence of damage or threat. For decades, these patrols have been accomplished predominantly by human observation, either from the ground or by visual aerial patrol. While this approach provides some basic assurance that the pipeline is intact, in many instances it remains a fairly costly compliance exercise and many operators deploy extensive additional resources to improve their pipeline integrity stewardship.

Early in Orbital Sidekick’s development, the founders recognized that satellite imagery, and specifically the gathering and analysis of satellite-derived HSI data, could meet the obligations of PHMSA to “inspect the surface conditions on or adjacent to each pipeline right-of-way,” (49 CFR 195.412), while at the same time providing infinitely more objective, repeatable and insightful analyses of threats to a pipeline as well as identification of small and incipient leaks below any commonly observable thresholds. Furthermore, all of this added capability could be offered at a price that would compete with visual aerial patrol. From the company’s beginning, OSK’s mission has been to build a pipeline monitoring service that would entirely replace routine aerial pipeline patrol.

OSK’s first attempts at HSI data collection took place using a small aircraft and the company’s customized small Unmanned Aerial Vehicle (sUAV) or quadcopter drone. While these platforms are still in use, they initially helped OSK prepare for its mid-2018 launch of an identical sensor to the International Space Station. Known as HEIST, this “Hyperspectral Earth Imaging System Trial” returned over 35 million km2 of data and, among other things, was able to return HSI data from an oil spill in the Bahamas, as well as support a fire threat analysis over western Australia. This mission took place for over a year and was successfully completed just weeks before the COVID-19 pandemic made impact. More recently, OSK has also demonstrated an ability to discern methane vapors based solely on HSI signatures.

With a test flight over a 10” natural gas pipeline in the Midwest, imagery revealed a small underground leak that was unknown to the operator. Several weeks later, another demonstration flight for a prospective client confirmed a release from a crude tank leak along a gathering line. These examples proved positively that HSI data with a sufficient resolution, if marketed correctly, could change the way operators steward their pipeline and storage infrastructure assets.”

While satellite operation is by itself noteworthy, the collection of HSI data is only the first stage in the company’s plan to transition from aerial patrol. Oil field operators aren’t in the market for HSI data, but they do require information on hazards to their pipelines. Analysis of this data is OSK’s second stage. The third and final stage is to provide timely reporting of anomalies and their geographic coordinates directly to its clients through the company’s web-based reporting tool, called SIGMATM.

Satellite-based HSI technology has been in use since at least the early 1980s, but it has also been limited to governments and military superpowers because of the exceptional cost to deploy and analyze. It is only now that computing capabilities and miniaturization of systems are catching up with the technology’s promise.

As a passive sensing technology, HSI data is generated line-by-line, a recording strategy often referred to in remote sensing as “pushbroom sensing,” rather than captured as a frame, as is traditionally done with common cameras. Whereas traditional imagery is presenting information through three broad color bands that can be seen by the human eye, HSI data offers literally hundreds of reflected light signals, each centered around a different wavelength, ranging anywhere from the visible (RGB) to the near infrared (NIR), and in many cases also shortwave infrared (SWIR).

Each pixel in a hyperspectral image represents a position on the earth’s surface. And for each pixel along a flight path, a reflected value for each spectral band is recorded in a data stack. For any given image pixel, the resulting spectral bands may be plotted to depict the characteristics of the surface according to the resulting reflected values from each wavelength band across the spectrum. Then, for each pixel, a characteristic curve may be drawn. Compared to visual imagery, each pixel in an image might contain two orders of magnitude greater information for characterizing ground features.

Consider how a bumblebee’s photoreceptors are sensitive to different wavelengths than the human eye to attract them to flowers. In a similar but more comprehensive fashion, HSI sensors provide a treasure trove of information that enables oil field anomalies to be isolated and reported back to operations personnel. OSK is especially focused on characterizing and identifying the sorts of anomalies that would indicate damage or threats to energy infrastructure and, in particular, oil and gas pipelines. These anomalies include soil contamination and free hydrocarbon, methane and other gas vapor, construction activity and soil disturbances, distressed vegetation, soil erosion, and a more general change detection over time.

With the dawn of commercial spaceflight upon us, this year is becoming an exciting one for the field of satellite earth imaging, and OSK is ready for its next satellite launch early this summer (having been delayed from January) with an additional launch planned by the end of the year. By year-end 2022, OSK’s fully commercialized and scalable constellation of high resolution HSI sensor satellites will be operable and able to collect data over any asset on the globe daily.

The company is presently working with several integrated oil companies as it transitions into a scalable operation with persistent assets in space. One notable project for OSK this year is with the intelligent Pipeline Integrity Program, which is a consortium of Bakken producers whose focus is to contribute to the advancement of near-commercial, emerging technologies to prevent and detect gathering pipeline leaks. OSK will also be speaking at a number of industry conference events to discuss the future of satellite-based pipeline monitoring. Among these, the company is being featured at the Common Ground Alliance (“811 Before you Dig”) Conference in Orlando, Florida, in October.

Peter Weaver’s 30-plus year career has engaged nearly every facet of midstream oil and gas operations. Prior to joining OSK in 2017, he advocated for the liquid terminals industry for over a decade in the United States Congress and across numerous federal and state departments. Before that, Weaver supported ExxonMobil Chemical with roles in product development, marketing, technical sales, and terminal operations and logistics. He previously held roles with International-Matex Tank Terminals in operations, engineering and quality management.

Weaver has held TS/SCI clearances, served as a licensed officer in the Merchant Marine, and holds degrees in business administration from the University of California, Los Angeles, chemical engineering from the University of Virginia, and marine engineering technology from Northwestern Michigan College. He is Chairman of the Camp Leelanau and Kohahna Foundation which promotes outdoor education and character development programs in Northern Michigan. He also serves as the media and legislative affairs representative for the Church of Christ, Scientist for the state of Louisiana. For more information, visit www.orbitalsidekick.com or contact Peter Weaver at peter@orbitalsidekick.com.