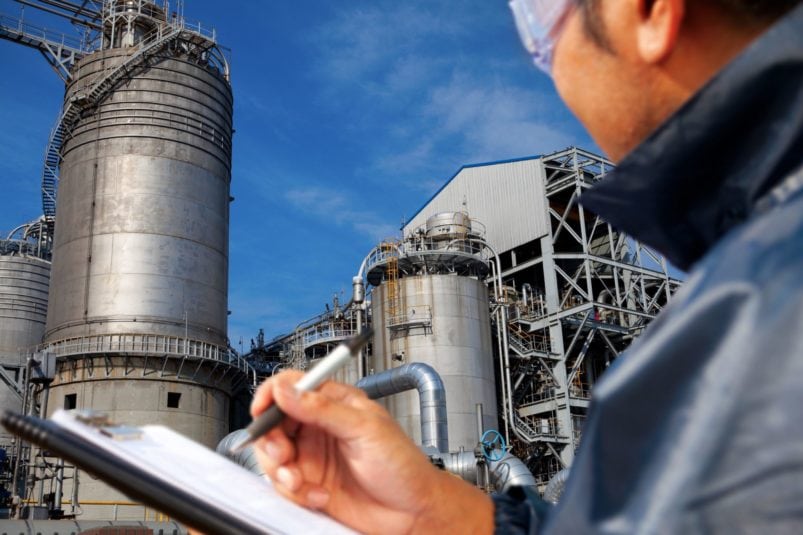 There’s often a misconception that regulation is a purely federal affair. However, the heart of regulation is local. State governments, not the federal government, have significant and primary oversight over the oil and gas operations that occur within each state. There are a few exceptions, of course.

There are cases where the federal regulators do attempt to enforce regulatory control over state oil and gas operations normally left to state control. Recently, the Bureau of Land Management attempted to enforce new regulations on fracking, for example. Without consequence, however, D.C. maintains control when interstate transportation of product is involved (such as interstate pipelines) due to the Commerce Clause of the U.S. Constitution. Additionally, when companies are operating on federal lands within a state, the federal government is the primary regulatory agent.

That said, regulation maintains a noticeably negative perception across the country, and often with good reason. Regulations can be difficult to understand, particularly given the thousands that exist for oil and gas. Effectively meeting all of those regulations can also be expensive and time consuming, creating notable roadblocks across all aspects of the industry.

A Glance at Oil and Gas Regulation

Few issues require as much mental and legal navigation for the oil and gas industry as regulation.

According to data from QuantGov’s RegData Industry Regulation Index, the oil and gas industry is both the most and the eighth regulated industry in the country. You might be wondering how it can fill multiple rankings, but that’s simply a factor of how far reaching the oil industry actually is.

Regulation for the industry is split between multiple sub-industries, including two key categories: Petroleum and Coal Products Manufacturing (most regulated) and Oil and Gas Extraction (eighth most regulated). There are also other areas where oil and gas are regulated significantly, although with a fewer number of individual rules, such as transportation and storage. In general, however, the more complex and dangerous an industry, the more regulations that will exist for it.

Whereas the average number of regulations per industry in 2014 was around 1,100, Petroleum and Coal Products were burdened under the weight of over 25,000 regulations, while businesses in Oil and Gas Extraction were forced to navigate nearly 12,000.

Little has changed 4 years later. And according to Patrick Maclaughlin and Oliver Sherouse of George Mason University in a January 2016 article for the Mercatus Center, “heavy regulation reduces entrepreneurship and employment opportunities and can divert investment from the most productive uses.”

Maclaughlin and others back up that claim in an April 2016 article for the Mercatus Center, stating that regulatory accumulation across all industries “has created a considerable drag on the economy, amounting to an average reduction in the annual growth rate of the US gross domestic product (GDP) of 0.8 percent.” Considering the U.S. has experienced an average growth rate around 2 percent since the market crash in 2009 (when the rate went to minus 2.8 percent), a 0.8 percent drag on economic growth is nothing to laugh at. It also makes it easy to see why many see regulation as an enemy to progress.

Given the economic and financial impacts it has, regulation tends to cause a good amount of annual kvetching. Yet the U.S. has no overarching energy policy in place dictating the actions of all state regulators, where most of the industry’s regulations actually occur. How different states regulate their industries can vary from state to state, with more or fewer regulatory roadblocks in place. As well, which state regulatory body has oversight will change, depending on the state.

Regulation at the State Level

Although some arguments do exist in the contrary, states are likely the best regulators for their own industries. Just as all politics are local, so, too, are the economic and environmental considerations for an industry as important as oil and gas. A 2009 report by the U.S. Department of Energy makes the claim that state-level regulation is primarily designed for water conservation. There’s certainly some truth to that, but regulation at the state level extends far beyond just conservatory considerations.

Most states with oil and gas operations have regulatory bodies specifically for the industry with a keen eye to how regulation best serves the environmental and public interests of the state. Nevertheless, expansive state-level oil and gas regulation is comparatively new compared to the age of the industry itself. And given the dynamic nature of the industry, those regulations do change frequently to help address new technologies and operation methods. Even in Pennsylvania, which boasts the first commercial well in 1878, official industry regulation from a state regulatory body was slow coming.

Across the country’s major oil and gas development regions, regulatory bodies maintained active oversight going back decades. In Louisiana, the Department of Natural Resources (established in 1976) maintains oversight. In Oklahoma, the Oil and Gas Division of the Oklahoma Corporation Commission (established in 1907) is the primary regulatory body for the state’s oil and gas industry.

And then there’s Texas and the Railroad Commission of Texas (established in 1891).

Few state regulators have such a colorful past, and none (arguably) have a more influential history as a state regulatory body as the Railroad Commission of Texas. As well, given the continued rise and importance of American oil and gas on the international market, many eyes are newly turned toward Texas and its revitalized gas production, as well as its role in providing the type of regulatory oversights that often go misunderstood.

The Railroad Commission of Texas: A Brief History

In 1891, the Texas state government established the state’s first regulatory body, the Railroad Commission. A product of the burgeoning Efficiency Movement spreading across both the U.S. and Britain in the late 1800s, the goal of the agency was not to create a burdensome environment for the railroads. Instead, the state and its new regulator hoped to reduce the growing problems created by railroad monopolies, including excessive price gouging.

Over time, the effectiveness of the Railroad Commission of Texas saw it expand into more areas—most notably, oil and gas. First stepping into the regulation of pipelines in 1917, the body’s oversight grew to cover many other areas of the industry, including production (1919), and natural gas delivery (1920).

By 1930, Texas oil was booming to such a degree that the RRC was not just the chief oil regulator in the country. From around 1930 to the 1960s, the RRC was the primary body helping to set oil prices internationally, prior to the emergence and dominance of OPEC.

In 2005, the Texas state government moved regulation of the state’s railroads over to the Department of Transportation. Now, having moved far past its original founding, the Railroad Commission of Texas’ name is purely symbolic as it carries on activities over an oil industry that is only growing in importance.

Regulation, According to the RRC

In many ways, the Railroad Commission of Texas offers up a model for what regulation of the industry should look like. And if RRC Commissioner Ryan Sitton is any example, a common-sense approach to oil and gas regulation is a large part of why the state’s industry continues to grow as rapidly as it does.

According to Sitton, regulation, especially state regulation, is not so much about a set of “do’s” and “don’ts” on the industry. Instead, the primary purpose is to help inspire confidence in the industry as a whole.

“The reason the rules are there is so the public has confidence in the way the industry operates,” Sitton told us. And as regulated as the oil and gas industry is today, Sitton pointed out that the history of regulation in the country actually dates back to a rather jarring incident with steam engines.

“The birth of regulation was actually in the steam boiler industry,” Sitton explained. What Sitton was referring to was a mass tragedy occurring on a steamship back in the 1800s. In 1865, the steamboat Sultana had several boilers that exploded, killing over 1,100 passengers. At the time, steamboats were a primary means of transportation, and particularly important to the Westward expansion of the U.S. and interstate commerce up and down the Mississippi.

According to Sitton, the incident resulted in a loss of confidence in the industry. “Within a few months, people stopped riding steamships. The steamship industry said ‘we need regulations so people know these things are safe’,” Sitton explained. Thus, the heavily-respected American Society of Mechanical Engineers (ASME) was born. New standards were put in place, regulations were set, and the public regained confidence in one of its most important industries at the time.

Sitton’s example highlights an important factor regarding the oil and gas industry. Oil and gas needs do more than just inspire the general public as to its safety. As the industry continues to grow and expand, it needs to effectively attract skilled workers willing to take on a sometimes risky endeavor. A lack of confidence in the safety of the industry can result in negative perceptions from the general public, industry observers, legislators, regulators, and the potential workers who help ensure the industry keeps functioning as intended.

For better or worse, this type of confidence is primarily won through rigorous and thoughtful regulations that quite often cover necessary safety standards as much as anything else.

According to the Railroad Commission of Texas, it serves the state in three overarching ways:

For Texas, that means proper regulation on oil and gas is a means to an end intended to benefit everyone in Texas, including the companies that choose to do business there.

The shifting fate of the oil and gas has led many to question regulation as a whole. President Donald Trump ran on a campaign dedicated to dismantling regulation across the board, stating that he wanted to eliminate two regulations for every new regulation adopted. While a hard look at the vast number of regulations has merit, but it may not always be the best approach.

For Texas and other states, regulation is a bit more nuanced than just a specific number of regulations. A practical application of existing regulations may be a higher priority.

The ability to effectively regulate is significantly tied to market pressures at the state level, and many state regulators, including the Railroad Commission of Texas, utilize a fee-based model. If the industry is in a down market, there’s often not enough money around to properly regulate in the first place.

“When the decline happened…our revenue was so low we had to scale back just like industry did,” Sitton said. That meant less money and less man-power for proper regulatory oversight, something neither the Texas state government nor the industry actually wanted. So the state approved a larger budget, “to help give us more stability,” Sitton explained.

As for the oil and gas businesses in the state? They were on board with helping the RRC as well. “We’ve worked with industry to make sure we can operate,” he said.

Regulation is likely never going to be a perfect solution. But industry-wide, regulation, when enacted properly, appears to hold a fair amount of value in the industry.

If state regulatory bodies like the Railroad Commission of Texas are any indication, it is certainly possible for states and the oil and gas companies within their borders to find a healthy balance that brings about a necessary level of confidence in the industry, without stemming growth.