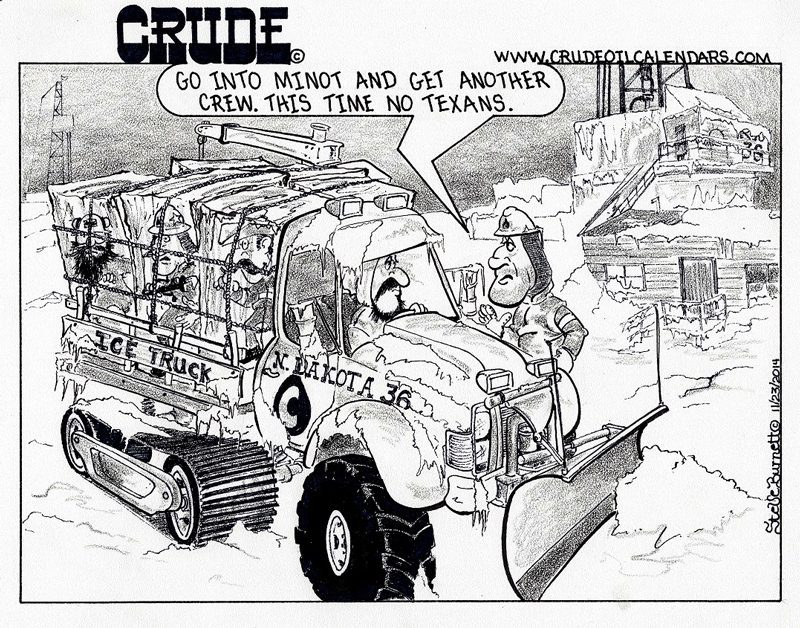 A couple of things came into play for this cartoon. Somebody from the oilfields of North Dakota suggested I do some weather-related cartoons. I thought this was a good idea, although I had trouble getting a handle on it. I felt like the comment was valid and that perhaps I had slighted the oilfields in the extreme colder climates, unintentionally I assure you. It is a little difficult to write and cartoon about something that you have no experience with. On a few occasions, I worked with my dad on the old Citco leases at night to unfreeze water-flood lines during 11 degree weather. I also went to New Mexico and got caught in a driving snow storm laying a flow line and catching up on other chores at the Apace #1 while working part-time weekends when I was in high school. Both of these experiences were a major influence on my decision to pursue my oilfield career in the Gulf of Mexico. However, I did not feel they gave me enough insight into cartooning the Bakken.

Recently, I heard a speaker from CCI Inc. with extensive experience in the oilfields of North Dakota. He talked about some of the challenges and mentioned that the wolves were starting to become a problem at night. That got my attention, although my only experience with anything like that is the coyotes of West Texas. Coyotes in West Texas are not exactly intimidating looking creatures. They are scrawny, underfeed, and about the size of an Australian Shepherd dog. Mostly scavengers, they are lucky if they can take down a winded jackrabbit. They keep the road kill and dead livestock cleaned up so well that there are no buzzards in West Texas. So my original cartoon was going to be about the Wolves of the North Dakota oilfield.

While researching stories about the oilfields of North Dakota, I came across an interview with an oilfield man of the Dakotas, and he talked about keeping the employees warm in extreme cold weather. He said “some men freeze faster than others.” I found that comment amusing. He also told the story of some hands driving up from Texas. They never even made it to the rig before they quit, he said. Apparently, their truck got stuck in the snow. After digging the truck out, they decided they had enough. They quit and went back to Texas without even making it to the rig. I thought to myself, they must have frozen faster than the locals. Bingo! This cartoon was born.