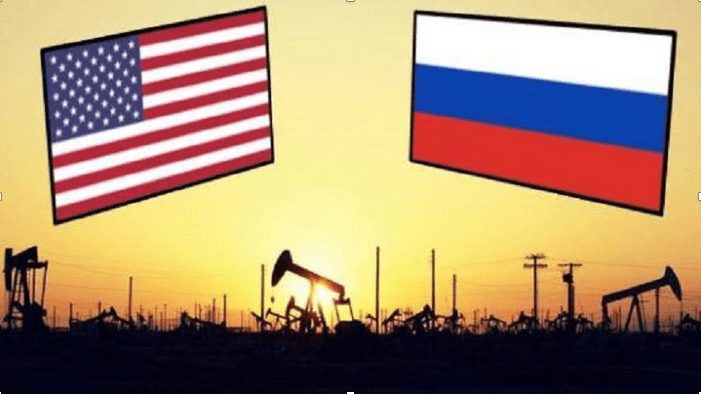 Last year, Russia and the USA produced respectively some 11.16 and 10.96 million b/d of crude oil and lease condensate or more than any other nation across the world (even more than the traditional but now decrepit oil heavyweighter Saudi Arabia (10.425 million b/d in 2018). Actually, this seems to be the only practical coincidence as all other patterns of these two countries’ oil business are quite different.

First, let’s compare their available oil statistics in detail. For this purpose, we take 2018 data for not only the whole national oil industries, but also for the largest and one of the smallest integrated public oil companies in these countries (Table 1).

Just to compare, historians say that the first oil was produced through a borehole in the USA in 1859 while in the Russian Empire – back in 1846 at the shallow Bibi-Heybat Bay northeast of Baku (Azerbaijan) and within boundaries of the modern Russia – in 1864 in Kuban’, near the village of Kievskoye, on a shore of the Kudako River.

Annual oil (crude oil + lease condensate) production in the USA experienced a decrease from some 9.6 million b/d in 1970 down to 5 million b/d in 2008 and since then was rising thanks to tight-oil (shale oil) developments and has neared 11 mb/d in 2018. Likewise, in Russia annual oil output was historically also far from stable: it reached over 11.5 million b/d in 1987 and dropped down to 6.1-6.3 million b/d in 1995-1998 (mainly due to the total disorganization of the national petroleum industry after the breakup of the USSR). Since then it fairly steadily rose and has reached 11.16 million b/d in 2018. Below we present a picture with monthly oil production in Russia and the USA as well as in Saudi Arabia (for comparison) in the period of 1998-2018 (Chart X).

At any rate, the oil industry plays a much more important role in Russia than in the USA: according to the CIA’s Directorate of Analysis (DA), oil contributes over 15 percent of Russia’s 2018 GDP and only less than 1 percent of the U.S. In turn, according to Raiffeisen Bank’s estimates, in 2018 payments of mineral extraction tax (MET) on crude oil and gas condensate amounted to 2.8 trillion Rubles (over US$45.4 billion) and accounted for nearly 20 percent of total receipts of Russia’s federal budget.

U.S. oil companies are given the ability to defer tax payments to the U.S. Federal government – it is estimated by American economists that the 20 largest oil and gas companies may defer payments on up to half of their federal income taxes. These companies end up paying less than 12 percent of their pre-tax income, which is 23.3 percentage points lower than what is required of most other corporations. The bulk is borne by the four largest companies – ExxonMobil, ConocoPhillips, Occidental and Chevron. These companies paid 85 percent of the group’s income tax, while smaller companies paid a much smaller percentage – less than 4 percent of their total incomes in taxes. Energy major Chevron, having earned more than $4 billion in 2018, absolutely legally paid last year zero federal income tax, and, according to the Washington-based Institute on Taxation and Economic Policy (ITEP), generally enjoyed an effective tax rate of minus 4 percent. EOG Resources, Occidental Petroleum and Kinder Morgan also paid no federal taxes and, according to ITEP, could boast effective tax rates for 2018 respectively of -7, -1 and -1 percent.

Generally, as it is well known, the IRS current system is designed in such a way that the more a taxpaying business entity annually earns the less of income taxes it relatively pays – consequently, the U.S. Big Oil gains profit even here.

Large U.S. oil companies also receive subsidies in the form of tax credits and exemptions. Oil companies have been able to avoid paying taxes on expenditures associated with the nebulous term “intangible drilling costs” since 1916. Intangible drilling costs can encompass fruitless efforts to drill in new locations, as well as costs associated with new equipment or drilling infrastructure. These are huge sources of E&P capital expenditures.

Also, oil production from certified deep wells and horizontal wells in the States is now exempt from severance tax for a period of two years or until payout of well costs, whichever occurs first.

Likewise, Russian oil companies have a lot of economic privileges. Russia’s oil taxes are among the highest in the world. They mainly consist of a mineral extraction tax (MET) and an oil export duty, in addition to the corporate income tax (20 percent), a value-added tax (20 percent), and tax on subsoil use required from oil companies. While, on the average, a current taxation of the Russian oil is estimated at around 70 percent of sales oil price, Rosneft, the country’s largest oil producer, which exploits major and highly productive oil fields and has earned nearly US$134 billion in 2018, has paid for 2018 only estimated US$ 0.4 billion in direct taxes or less than 3 percent of its earnings, and Russneft, Russia’s smallest integrated oil company, has recorded for 2018 US$2.8 billion in revenues and only US$0.1 billion in taxes (paid in early 2019). And this is not surprisingly, as only in 2018 the company has obtained from the government more than 10 billion Rubles (over US$160 million) in the form of MET breaks.

Whereas the oil industry in the States is fully private and free of governmental regulations, except for those concerning conservation of nature and natural resources, health safety and technical standards (like bans on drilling and laying pipelines, MAOPs, tanker double-hulls and the like), the Russian oil business – even after its massive and all-out privatization back in the 1990s – is still under considerable control of the State. In particular, the Russian government or the Republic’s authorities now control 24.2 percent of Slavneft, almost 30.45 percent of Tatneft, 47.85 percent of Gazprom Neft (former Sibneft), 75.16 percent of Rosneft (the nation’s leading oil producer), and over 82.66 percent of Bashneft. This means inter alia that over 34.7 percent of national oil production (including lease condensate) in 2018 (or more than 193.03 million tonnes out of nearly 555.84 mmt) was controlled by Russia’s State. And here we have not mentioned the country’s oil export, which is completely controlled by the government as Transneft, which handles these exports, fully (100 percent) belongs to the former as far as Transneft’s voting shares and privileged ones are concerned.

Finally, unlike their American colleagues, Russian oil companies are really “fat cats,” enjoying, on the average, around 20 percent of net ROE as compared to a negative one-digit net profitability of the U.S. oil business in the relatively-low-oil-price 2018 or as modestly as -3.52 percent of the average net ROE for 2018 – at least, statistically.

All in all, common people in both the USA and Russia are proud of their national oil industries, but hate the latter for the huge untaxed profits. This is, perhaps, another similarity but no more… 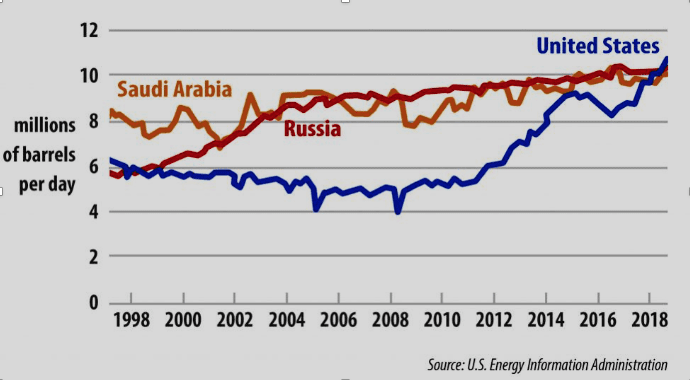 (1) Average for all oil/gas-producing companies in the USA. (2) In Russia, for crude oil only, in US$/b. (3) In the USA. (4) Average for Russia (and all oil-producing companies), for crude oil only, in US$/b. (5) In January 2012 the 350-650 kb/d HOVENSA refinery, located at: St. Croix in the United States Virgin Islands and 50% owned by Hess Corp. thru its joint-venture with Petroleos de Venezuela, S.A. (PDVSA), was closed down (for environmental reasons) but may restart in 2019. (6) For crude oil; paid in early 2019 for 2018; excluding ad valorem taxes and export duties; income and production taxes on oil companies in the USA. (7) Payments of MET on oil in 2018. (8) ROE (return of net income on equity – in line with the GAAP). (9) For integrated petroleum operations.