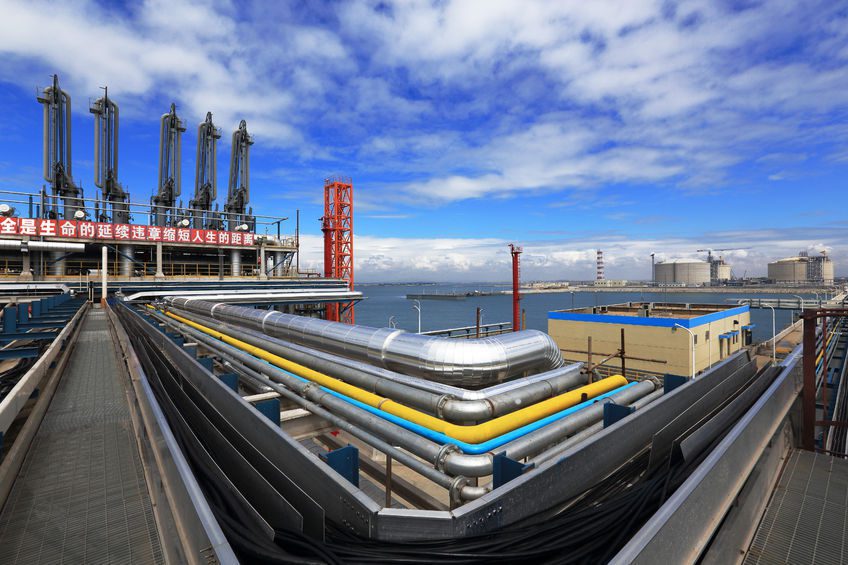 LNG is growing at a rapid pace because it is seen as a more environmentally friendly alternative to produce electricity. This is because it is cleaner burning than other fossil fuels and more infrastructure, such as import/export terminals, has been built in the U.S. and in other countries, namely energy hungry China, to facilitate its use.

To get a better idea of what is going on in the hot LNG sector, OILMAN Magazine had the opportunity to speak to Vincent Lagarrigue Director of oil and marine hoses operations at Trelleborg AB, a Swedish engineering company that works across a variety of verticals with a strong presence in polymer technology.

OILMAN Magazine: In terms of technology, what is new on the LNG scene?

Vincent Lagarrigue: In the last few years we’ve seen an increasing need to respond to changing demand patterns in the market. The most notable of these is the growing need for flexible, often small-scale LNG infrastructure, particularly in Asia.

In China for example, last winter LNG demand hit an all-time high after it was leveraged to combat smog, setting the country on course to take over from Korea as the top importer in the region. Elsewhere in Asia, new demand is growing fast in regions that have not traditionally been major LNG importers. Recently, Mangesh Patankar, head of business development at Galway Group, predicted that by 2025 demand for LNG in Asia will reach 290M tons per year (mta). Buyers in the region, such as Indonesia, Thailand, Malaysia, Singapore and Pakistan, are expected to import a total of 60 mta in 2025, making up 79% of Asia’s LNG imports, compared with 21% from the region’s traditional buyers China, India, Japan, South Korea and Taiwan. This demand must be met by infrastructure that is flexible and in line with the needs of locations that will often require power generation infrastructure to be located away from major import hubs.

While demand is growing, and gas is readily available, the cost of developing transfer infrastructure risks reducing feasibility of power generation and terminal projects. For example, it might be necessary to conduct transfers in water depths that would either be too shallow for carriers, or too deep for jetties to be constructed.

To solve these challenges, cryogenic floating hose technology can be employed because it can create turnkey infrastructure projects that reduce the capital expenditures and the environmental impact of LNG import infrastructure. In many locations, jetty construction may be unfeasible, either due to harsh conditions, or the depth of the water. The water depth might be either too deep to allow construction, or too shallow to allow vessels to come alongside.

Secondly, floating hoses offer new possibilities for ship-to-ship transfer. Transfer between a carrier and FSRU, for example, has traditionally needed to be behind breakwaters, due to the complexity of handling side-by-side transfer. However, floating hoses in tandem configuration mean that transfer can occur in a far greater range of locations. This configuration increases the distance between vessels, ensuring safety, while the flow rates of 12,000 m3/h achievable, lessen the time window – both of which are important factors in safe transfer. This greatly increases the range of potential FSRU locations, opening up stretches of coastline where previously wave conditions would have prevented transfer.

OM: Could you go into deeper detail on transfer technology for LNG?

VL: The floating hoses feature a unique hose-in-hose design. It consists of an inner cryogenic hose, which uses multiple polymeric film and woven fabric layers encapsulated between two stainless-steel-wire helices to provide resistance to internal pressure, and an outer hose, which provides protection from the environment. Fibre-optic technology is incorporated into the insulation material of the hose to ensure real-time monitoring of the LNG transfer.

The Universal Transfer System (UTS) is ‘plug and play’, requiring no modifications on the LNG supply vessel. By bringing the infrastructure to the carrier, the need for extra construction can be reduced, while also enabling transfer in areas that would be otherwise unsuitable. It also allows transfer infrastructure to be relocated when out of use, or for maintenance, or brought into port to avoid damage from adverse weather. This also frees up space and time in busy ports.

The short installation time also adds to the success of the UTS. The initial test project took only six months to set up, which is up to six times faster than a jetty, and up to 80 percent cheaper compared to traditional, fixed infrastructure.

OM: In order to keep up with the high demand of exports, what kind of shift in technology/process does the U.S. need to follow?

VL: As demand for exports increases, we need to think about how we can address infrastructure challenges in a more agile way that allows faster construction and lower capital expenditures. At the same time, we need to focus on increasing operability, increasing resilience, and where possible, how we can go about augmenting existing infrastructure rather than reinventing the wheel. In these instances, it makes sense to think about alternatives to traditional transfer infrastructure based on jetties and loading arms, which may not suit all environments.

OM: What technologies will increase the efficiency of LNG transport? How is Trelleborg contributing to this technology? What are the main challenges faced in offshore LNG transfer and how to tackle these issues?

VL: Our 40 years of experience in the industry have taught us many things, and it’s important to us that we build on our previous successes to create new solutions that solve the problems of today. There’s no silver bullet to improving LNG transfer, and every piece of tech needs to function effectively within the wider digital and physical infrastructure network. It’s not about riding the wave of ongoing digitalization just for the sake of it; it’s about combining our insight with all of the tools we have at our disposal to come up with the best product for our customers. We need to think about how we can underpin digital innovations with infrastructure that’s specifically designed to meet the needs of the changing market.