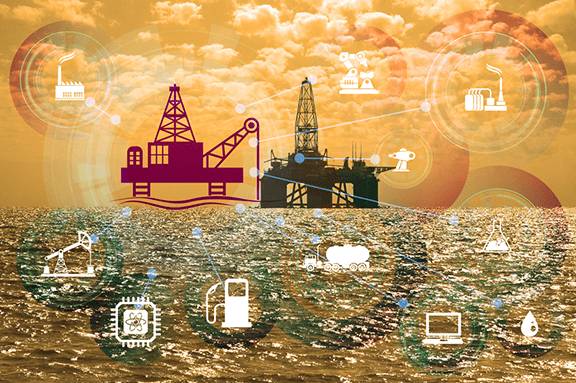 As software and technology continue to further penetrate the oil and gas industry, the upstream sector is seeing the technology benefit as well, in the form of programs that can digitally reproduce the inner workings of a production plant – a so-called digital twin, which is essentially all of the metrics of that production plant at your fingertips. The technology creates a virtual model of production assets which are continuously updated, by a network of sensors streaming data on operational conditions into the system. Digital twins can increase operational efficiency by up to 10 percent.

OILMAN Magazine had the opportunity to speak with KBC about its digital twin technology. KBC is a leading Digital Transformation company, which offers a unique blend of digital oilfield solutions and technologies with the asset digital twin, differentiated management and technical consulting, extended through real-time data and the process automation domain.

35 Years in the Making

Taking an entire plant and its internal operations and digitalizing it is a tall order. KBC described the lengthy process of how this software came to be.

The whole suite of technologies (Multiflash for thermodynamics and reservoir fluid characterization, Maximus for thermal hydraulics and Petro-SIM for topsides and other process equipment simulations and overall integration) has been continuously developed over the past 35 years, with some of the original developers still very much engaged in taking the systems forward through our on-going research and development program. There has been much collaboration through the years with academia and joint industry projects across the globe.

This software has been in the making for a very long time and has been ever-changing to meet the demands of the industry. Software like this offers upstream companies and operators a way to better their craft at extraction, processing and all the logistics that are part of the upstream sector.

From project start to finish, you will always be better off with technology that spans the entire project. KBC asserts that, “As the model evolves, gaining more detail and use cases that spawn sub-models, [it] reflect[s] different purposes still using the single version of the truth.” Anyone in software development knows that the single source of truth is very important; otherwise, you can end up with a project failing or being significantly delayed because of misinformation. KBC went on to say, “Key use cases go beyond the traditional steady state conceptual and detailed design into dynamic modeling for control systems analysis and checkout. As the development moves through construction to production, the system allows operations staff to train on operating the asset and to get familiar with different operations scenarios.”

In this case, the technology also helps the users and operators prepare to utilize the actual systems once they go live.

Besides using this for plants and internal operations, what other applications does this software have in the upstream sector? There are many facets to the upstream sector that could benefit from technology such as this. KBC responded, “We see that the asset digital twin is a single integrated production model, operationalized with real-time production data connecting wells, chokes, flowlines and a wide range of processing and power generation equipment with common thermodynamics and fluid characterization throughout for consistent results.” At this level, users can get down to the very start of extraction and maximize results with valuable data and metrics from early on in the process.

The technology behind digital twins allows companies to have many advantages that would otherwise not be possible, such as the ability to run risk analyses, health assessments, and what-if scenarios in real-time; train personnel in a 3D immersive, risk-free environment; and the capability to detect problems early on before dangerous levels are reached. Digital twins can constantly be updated, modified and fitted to meet the needs of the user. By going about it in this way, companies are able to either integrate current sensors and corresponding data or add new ones. The beauty of it is that you don’t have to start from scratch, you can use your already existing data monitoring systems to integrate into a digital twin system. This approach adds to cost savings.

In addition to using digital twins for production of assets, they can be employed to help in the fight against corrosion. One of the leading causes of downtime in the oil and gas industry is when corrosion is not monitored and leads to a shutdown of the assets. KBC uses OLI’s electrolyte chemistry and thermodynamics modeling as part of the digital twin, which allows us to predict concentrations of the key corrosion-accelerating species through the process equipment. These predictive analytics are then used to inform projections of corrosion rates. Engineers can examine alternate scenarios (impact of operating conditions, inhibitors and so on) to understand how to reduce concentrations and slow down the corrosion rate. This helps save money over time because corrosion is constantly being monitored and mitigated, thus preventing downtime.

With the quick uptake of digital twins in the upstream sector and the weathering of COVID-19 after the 2014-2015 downturn, it is easy to see that the industry has been tried and battered, only to emerge stronger than before by embracing new technologies to increase efficiency and shore up the bottom line. Over the past ten years or so, there has finally been that drive toward embracing technology and looking toward what is next. The old ways of working, where the only thing that mattered was getting the oil out, have been replaced by technology with a smarter approach to extraction and reduced waste. Before, pumps would be run until they broke and a new pump would be on standby to replace the failed one. Now predictive analytics and big data and sensors can pinpoint when a part of a pump is going to go down and, instead of replacing the entire pump, the part can quickly be switched out, leading to less downtime and capital spending.

The oil and gas industry has had to reinvent itself several times over the past decade and now appears to be in a place where it can play by the rules of the 21st century and be more cost effective and even more environmentally friendly in some ways, something that was not thinkable over ten years ago.