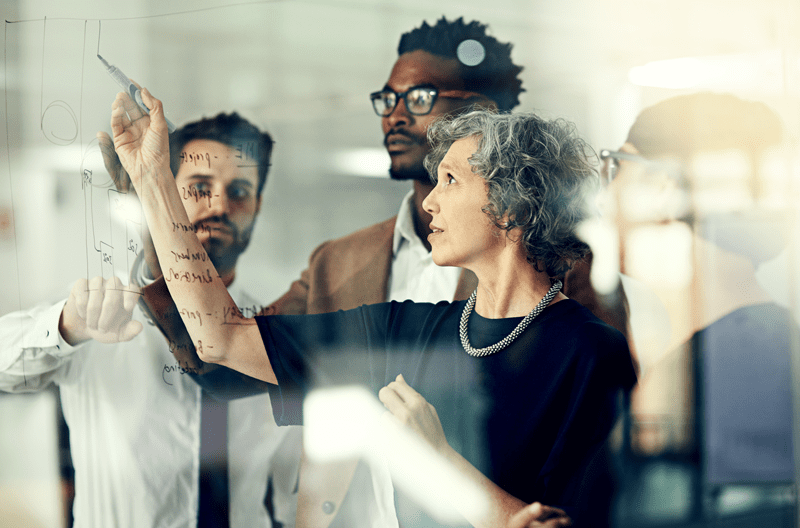 A few years ago, a step toward diversity and inclusion in the oil and gas industry meant a young, female crew member on a frac pad received her own portable toilet while the other 100+ male crew members shared three or four. The animosity among the men was palpable.

The oil and gas industry has long endured a reputation as a good ol’ boy network dominated by white men. Those not in the industry see it as suspicious of youth, change, and innovation. Insiders know differently. Production engineers in their 20’s have responsibility for entire basins, major advancements have been made in keeping employees safe, and technological innovations have significantly reduced costs allowing the industry to survive downturns that would have crippled the less adaptable.

Why then has diversity and inclusion not experienced the same progress? There are fewer women in oil and gas than almost any other major industry, and gender diversity decreases with seniority. Women account for 27 percent of entry-level positions and only 17 percent of executive-level roles.

The short answer is it hasn’t had to. In past years, the industry prioritized making workplaces safer and making drilling, completion, and production processes more efficient to survive. But, times are changing, and there is a full-on war for technical talent. The industry can no longer limit itself to half the population, nor can it let the women that have been recruited exit. Without an employee base of women, the industry will not have enough talent to continue making the innovations required to survive the next cycle.

According to research conducted by McKinsey & Company, the problem is in the pipeline. Only a third of entry-level employees in the oil and gas industry are female, which puts the industry last in female participation at entry-level when compared to other sectors. Savvy, forward-looking companies are identifying the degrees and skills needed, then aggressively recruiting new and recent female graduates in these fields.

Once hired, entry-level young women look for role models in positions to which they aspire, but participation of women in those positions is limited. It’s an indirect message that those positions are not for them. In addition, senior leaders tend to mentor those that remind them of themselves. Young women have a harder time finding mentors and champions at higher levels in their organizations, which leads to them being passed over for those critical moves into roles of greater responsibility. Ironically, this drain is referred to as the “leaky pipeline.”

When women hit mid-career, they face entirely different roadblocks. Career paths are rigid and relatively predetermined, with milestones measured by a specific sequence of professional experience and skill development. In working to break through the mid-career barrier, some executive positions are simply not presented to women because men assume they lack the required flexibility due to presumed family demands – yet they’re often not asked. Women who push through are tasked with broadening the mindset and challenging the assumptions of male colleagues making hiring and promotion decisions.

It’s not just about women. Change being inevitable, an estimated 71 percent of the oil and gas workforce is 50 years old or older, and they are aging out. Dubbed the “Great Crew Change,” oil and gas companies face disruption in the workforce and have the choice of creating environments that attract young, skilled, and diverse talent else lose them to tech giants like Amazon, Apple, and Google. Going beyond gender parity, savvy companies are focusing on developing a culture that attracts and inspires all cultural, ethnic, health, and gender sectors.

Whether overtly or unconsciously, people are discriminated against because of race, sexual orientation, religion, and other reasons. A 2017 U.S. Labor Department analysis revealed that African-American workers held just nine percent of the jobs in oil and gas extraction, and, despite the boom in the industry over the past decade, African-Americans never comprised more than one-tenth of the nation’s oil and gas workforce. The report noted similar statistics for Latinos.

Millennials account for over a third of the U.S. labor force, soon to be the largest living generation in this country’s labor force, and Generation Z is already five percent of the labor force. By 2025, the workforce will be millennial and Gen Z and these generations are the epitome of diversity and inclusion – everything from race, gender, sexual orientation, and different thoughts and perspectives. Unless changes are made, the oil and gas industry will not be considered an attractive career option among that demographic, leading to further workforce “leakage.”

While there is not a silver bullet to address the D&I issues in oil and gas, there are some easily implemented initiatives that can help attract and retain talent. To help address these issues, Sodexo, the global food services and facilities management company, recently relocated its E&R (Energy & Resources) headquarters to Houston, commonly referred to as “The Energy Capital of the World.”

For millennials, a big paycheck is not enough. They place high regard on social impact, the environment, diversity and equality, and corporate social responsibility. They also value individuality, so they have an appreciation for companies that take the extra effort to accommodate their unique needs. In office environments, Sodexo is implementing concierge services that provide car detailing, dry cleaning, haircuts, and other personal services. In man camps, Sodexo is implementing amenities such as 24-hour cafeterias that serve gourmet / healthy meals, entertainment rooms, fitness centers, recreation, retail, and on-site Wi-Fi. Some of the changes that seem minor can be momentous, like uniforms designed to fit women.

Putting its money where its mouth is, Sodexo E&R heavily promotes diversity and inclusion through events and its own best practices. Sodexo (global) is the world’s 19th largest private employer and has committed to having 40 percent women among Senior Leaders by 2025. While considered controversial, manager compensation is directly tied to achieving D&I goals. Today, Sodexo’s Board of Directors is 58 percent women, and Senior Leaders globally stand at 33 percent women. Overall, women make up 55 percent of Sodexo’s 460,000 employees.

Sodexo has been recognized for the 11th consecutive year as a top company for diversity and inclusion by DiversityInc and is one of the first inductees into DiversityInc’s Top 50 Hall of Fame. Sodexo ranks first place / best in class in its industry by Dow Jones Sustainability Indices 15 years running, with leading scores in labor practices, climate strategy, and stakeholder engagement. In 2018, Sodexo received the “Woman Chair Prize” on the European Gender Diversity Index, which recognizes a company with a woman Chair and the best female representation on the Board among the 200 largest companies of the Stoxx Europe 600, and last year was selected by Bloomberg Gender-Equality Index, an honor that distinguishes companies committed to transparency in gender reporting and advancing women’s equality.

D&I is no longer a nicety; it’s a necessity. By creating an inclusive workplace, the oil and gas industry will have access to a larger talent pool and higher retention rates of key talent, leading to increased profitability and better performances.

Stephanie Hertzog is Sodexo’s CEO of Energy & Resources – North America.  She has over 20 years of experience in the energy industry and has spent most of her career in services business, focusing on general management, strategy, and sales and marketing. Stephanie started her career as a Process Engineer at Celanese.  She spent several years as an Engagement Manager with McKinsey & Co, a global consulting firm.  After McKinsey, she joined PSC, an environmental services firm in need of a turnaround following the company’s second bankruptcy filing, as Senior Vice President of Strategy.  After PSC became profitable, she joined Exterran, a publicly held oilfield services company.  She held several roles at Exterran as Vice President Sales and Marketing, Vice President Strategy, and Vice President Product Lines. After Exterran, Stephanie was Senior Vice President at Tally Energy Services, a private equity backed oilfield services start-up. Stephanie earned her Bachelor of Science degree in Chemical Engineering from Texas A&M and a Master of Business Administration from Harvard Business School.