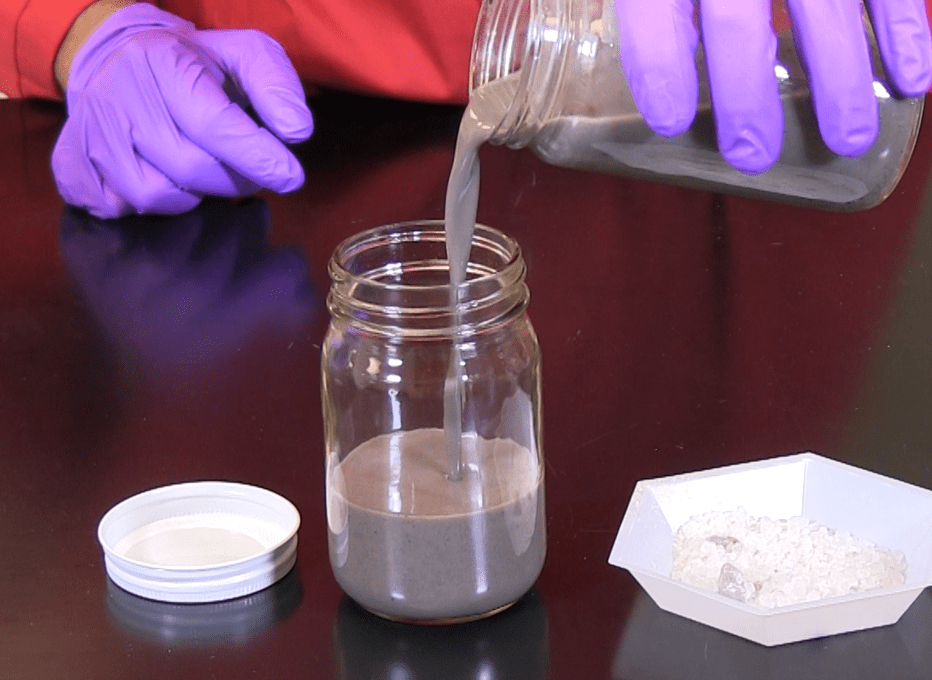 Drilling technology. When you hear these words, you immediately think of drills, drill bits and drilling techniques. However, drilling fluids are often overlooked. It’s not a good idea to run a dry drill into the ground without the proper fluids.

Conventional oil well drilling in the Permian Basin requires, on average, thousands of barrels of water. While water is required to drill, all this fresh water creates waste, is an environmental problem and in some cases cause the collapse of bore holes in salt structures.

There is a layer of salt in the Permian basin that is several hundred feet thick. When fresh water comes into contact with the salt, it dissolves, leaving a cavern that disrupts pressure, flow, and the ability to extract hydrocarbons. Furthermore, there is associated cost with the demand of trucking in fresh water to drill wells. J.J. Miller, a Drilling Fluids Engineer from Halliburton, said, “using fresh water is a huge demand on the system and it can be an issue to find enough water. On top of that, prices increase when you have a water demand spike out there.”

Produced Brine, Latest Innovation to Drill through the Salt Layer

To overcome these problems, drilling fluids have been designed to use recycled water, produced water and a recent development, produced brine to be re-injected into wells for continued operation. Produced water from a producing well in some cases is mixed with salt to create a produced brine solution. Miller commented that produced brine “is saturated with salt and it is very low cost, readily available and the logistics are easy because all the ingredients are already near the well site.”

Additionally, the produced brine is especially helpful for penetrating through the salt layer as the drilled salt does not dissolve and the integrity of the borehole can be kept. Using the briny drilling fluid can save operators on repair costs. Repairs in this case are when a collapse occurs, exploration companies must inject concrete into the well casing to seal it up from the hole that was created, spending time and money to do so. “Operators have to pay a lot of extra money to get that cement volume and go through several attempts of pumping cement to get that to happen,” said Miller.

“In the intermediate section of the well, about halfway through the drilling process, there is a geological formation that consists of salt, depending on your location, it can be anywhere from hundreds of feet thick to even thicker in other areas.”

While all the salinity can be bad for moving metal parts, drill heads are run through an anti-corrosion treatment to keep them running in the salty environment. However, too much brine can be a bad thing. Miller elaborated, “The brine itself weighs too much. You get all that salt dissolved in it and the density is somewhere about 10 lbs. per gallon. To counteract that we emulsified some oil into the fluid to get the density down to about 9 lbs. per gallon to prevent losses later down in the well.”

The reason why it is vital to get the drilling fluid lighter is that as the well is drilled deeper, structures are weaker and cannot withstand the pressure from 10-lbs-per-gallon fluids. These structures collapse and then the integrity of the well is compromised. If this occurs, then more cement must be injected and the same problem happens but for a different reason.

Drill cuttings or the bits of rock that are returned from the drilling process are usually coated in oil, which makes disposal a costly chore of rounding them up and trucking them to sealed sites where they are left often to build up and be a burden on the environment. In order to combat this challenge, salt is added to the oil-based systems, as Miller describes, “to help drive their inhibition and make them really dry out formations to be able to drill quickly through the rock to prevent any kind of breakdown in the formation.”

For example, injecting a clay formation with salt water dries the formation out, which in turn makes it more stable and increases well integrity. This was the old way of doing things. What they can do now is drill with a salt-free oil-based fluid and treat the cuttings with a method that is referred to as bioremediation, where the drill cuttings can be reused for farming. This is very efficient because it’s a natural biological process and the earth can return to the earth in a natural way.

However, this technology was, as Miller referred to it, “born into a declining industry back in 2014. It sounds kind of like old technology that has been all but abandoned.” While this has been tabled due to the downturn, Miller believes that the bioremediation and land-farming with drill cuttings will be the next big thing because it will be cost effective and friendly for the environment.