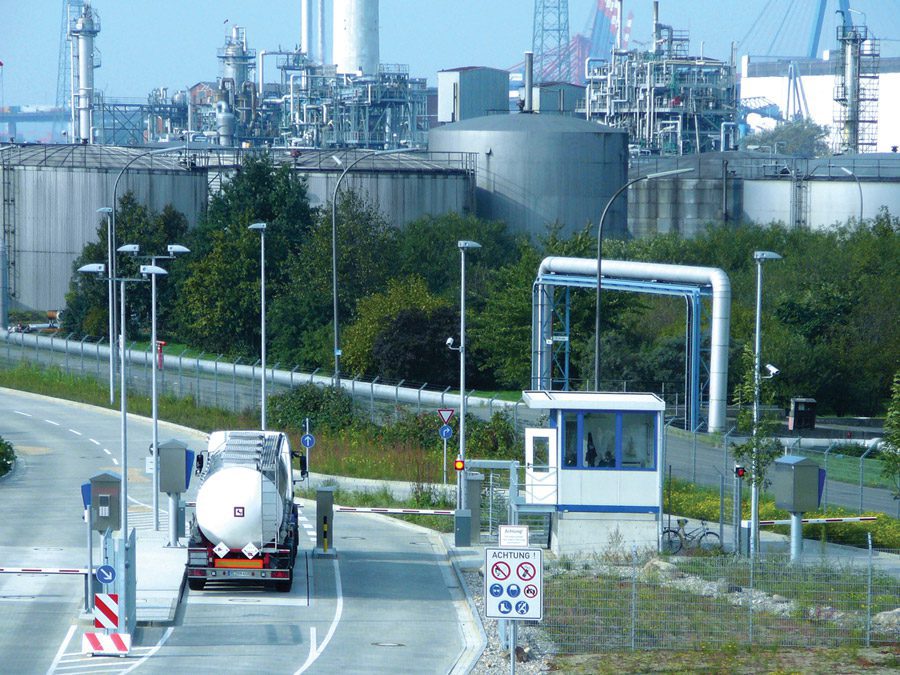 Buying chocolate from a vending machine, booking a holiday on the Internet, paying for groceries or furniture at a self-service checkout; the trend towards self-service is becoming commonplace in every area of our lives. It even extends to some tank terminals, where drivers can now manage the entire loading process from check-in to check-out on their own. This “Driver Operated Loading” concept is being made possible by modern software that supports each step of the process and ensures that the correct data is available in the right place at the right time.

Driver Operated Loading eliminates unnecessary waiting times. It is welcomed not only by drivers but also by tank terminal operators, who can turn round more trucks per day and make more efficient use of their facilities – at any time of day or night. It also enables them to offer petroleum dealers better prices for their services.

It’s Tuesday, 8:30 am at a model tank terminal. The driver pulls up at the entrance. He is here every day. Some days he makes several collections. Today, a petroleum dealer has asked him to collect 35,000 liters of fuel and deliver it to a smaller tank terminal.

At the terminal entrance, the driver enters the number of his current job, which was already entered into the tank terminal’s automation system. He swipes his vehicle’s ID card through the card reader and identifies himself biometrically with a hand scanner.

Before the introduction of Driver Operated Loading, a tank terminal employee had to manually check each truck to make sure that the driver’s license and the vehicle test certificate were still valid and that the vehicle was actually authorized to collect the respective fuel. In the meantime, the tank terminal has switched to a fully automated system that carries out these checks in the background in a matter of seconds. The recently introduced terminal management system OpenTAS compares the data of the driver, the vehicle and the job with the data already in the system. This is not only much quicker, but it also minimizes the possibility of errors due to incorrect inputs. At this point, the system also carries out an automatic credit check. As long as the customer’s account is not in arrears, collection can go ahead.

In Europe, excise duty suspension arrangements are applied when petroleum is moved between tank terminals and these must be approved in advance by customs using the Excise Movement and Control System, or EMCS. To prevent tank trucks from being loaded that may subsequently be refused approval, a preliminary EMCS assessment takes place at the entrance. OpenTAS automatically sends the relevant transport data to customs.

When all the checks have been completed successfully, the barrier opens and the driver can drive onto the site.

Just inside the entrance, the lane control assistant shows the driver which loading bay he should approach. This information is also provided by OpenTAS. The terminal management system knows which product can be loaded at which loading bay and which bays are currently being in use by other vehicles. This maximizes the capacity of the loading bay area and optimizes the movement of traffic on the site.

Things go quickly this Tuesday morning and the driver is directed straight to bay five. Each time he makes a collection, the driver must make sure that everything is ok with his tank truck. This includes checking the tires, for example. With Driver Operated Loading, the driver carries out these checks himself.

For some products and in some countries the truck has to be weighed before and after loading. Products such as bitumen or LPG (Liquefied Petroleum gas) are normally filled, billed and shipped by weight rather than volume. In Eastern Europe, this also applies to fuel. On an automated system, the driver simply carries out the weighing himself. The weight data is stored in the system, ensuring that the gross vehicle weight is not exceeded.

When he arrives at the loading bay, the driver logs on and connects the loading arms to the truck. As all necessary data is already in the system, loading can start as soon as he presses the button. It takes only a few minutes to load up the quantity ordered. As soon as the loading arms have been removed, the truck is equipped with a seal, which can be inspected upon delivery to make sure that the tank has not been opened en route. Since the truck is fitted with an electronic sealing mechanism, sealing is carried out automatically after loading.

The loading bay metering system automatically transmits the actually loaded amount to the terminal management system. This relieves the driver of the task of having to copy the figures from the display and handing in a ticket at the exit.

The terminal management system now initiates additional checks, such as the final EMCS check, for example, and prepares the shipping documents for the driver. Intelligent systems – such as the OpenTAS process automation solution used in this case – update the accounting system’s inventory levels in real time and submit the data to the tank terminal’s ERP system.

Meanwhile, the driver has arrived at the exit barrier. Once again, he swipes his card in the reader. All the shipping documents, invoices and the EMCS approval document are printed out automatically. The system eliminates the need to wait while a terminal employee enters the loading data, sends it over to customs and prints out all the documentation. The barrier opens and the driver is on his way.

Measuring Performance from Arrival to Departure

Thanks to the terminal management system’s fully automatic operation, each process step is meticulously recorded and documented. Analysis of this data opens up previously unimagined gate-to-gate control options. Does one driver take longer to load up than another? Or are there differences between trucks? Or at one specific loading bay? The terminal manager can easily spot areas where there is potential for improvement and introduce carefully targeted measures to help his terminal operate more efficiently in the future. He can even compare operations in the different storage areas.

Automation also offers numerous benefits for day-to-day operations. The fact that manual data acquisition is no longer needed not only reduces the amount of administrative work but also improves the accuracy of data entries. The automated processes guarantee that all movements of goods are recorded without exception while at the same time making the loading process much easier for the transport companies. Not only that, but the traffic control and real-time monitoring systems maximize on-site security.

A Win-Win Situation for Drivers and Tank Terminals

Fully automated operation with Driver Operated Loading produces a win-win situation. Transport companies enjoy working with the tank terminals because the loading process is not only quicker but also much more convenient. Tank terminal operators in turn benefit from the more efficient use of their facilities, which enables them to offer attractive pricing – which in turn leads to higher revenues.

In a few years’ time, Driver Operated Loading could be just as normal as booking a holiday via the Internet.