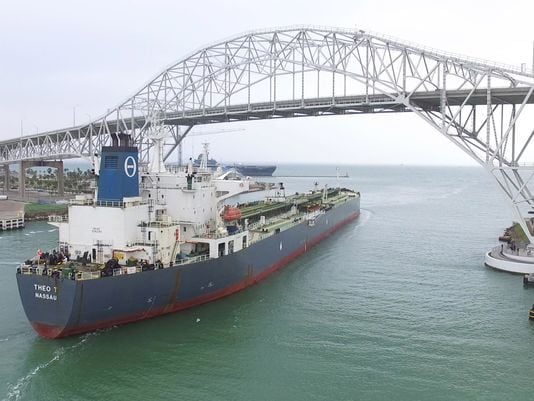 The tanker, “Theo T”, is holding Eagle Ford crude pumped from South Texas and is believed to be heading toward Europe. ConocoPhillips sold the oil to Vitol, an international trading company.

The port of Corpus Christi has been the recipient of many investments in past years that have geared the Texas port to be a leading exporter of crude oil in the years to come.

Port Corpus Christi Executive Director John LaRue said in a statement: “Infrastructure improvements at Port Corpus Christi have placed our port in a unique position as a critical component in the export of U.S. crude and condensate.”

The deep water dock space and plentiful storage of Port Corpus Christi are listed as major advantages to the port, with plans to further deepen channels in order to accommodate some of the largest ships in the world, according to a press release from the port.

After a lengthy battle in Washington, lawmakers reached an agreement within a spending and tax package that lifted the four-decade-old oil ban. The legislation was announced in the middle of December.

In exchange for the lifting of the ban, Republican lawmakers conceded to extend renewable energy tax breaks. In the spending and tax plan, solar investment tax and wind production tax credits were awarded five-year extensions.

The fight for the export ban to be lifted intensified over the past year, with industry and lawmakers citing concerns that Iranian oil hitting the world market would prove harmful to U.S. oil producers.

The U.S. crude oil export ban was implemented as a response to OPEC’s oil embargo of Western countries. The intention of the ban was to protect the oil industry in the U.S. from the recoil of OPEC’s price setting, as well as the protection of scarce supplies of domestic oil at the time.