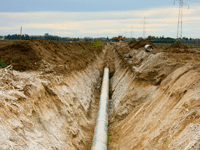 On Oct. 16, a natural gas pipeline owned by Lewis Energy Group exploded and caught fire in Encinal, Texas. The cause was unclear and no injuries were reported. The fire started in the early hours of the morning and local fire departments worked to extinguish the blaze that could be seen for miles. The area was evacuated as a safety precaution and the intense heat drove three families from their homes. The fire was contained later that morning. The investigation has started and the site has been de-energized.

Early reports were blaming an oil pipeline, but, as the day progressed, it was said to be a natural gas line that was the root of the explosion. State Highway 44 was reopened following the explosion and an inspector from the Texas Railroad Commission would be conducting an investigation for the cause.

San Antonio based Lewis-Energy is a natural gas producer with more than 1,400 natural gas wells.