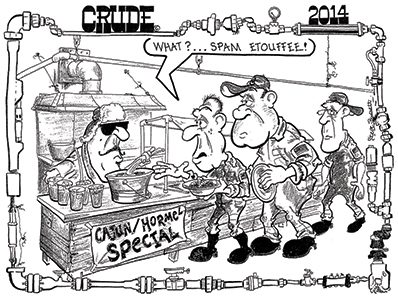 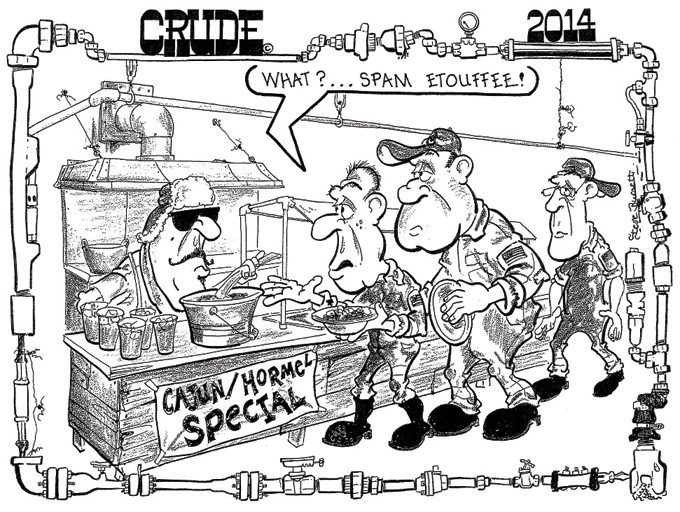 The power of SPAM, and I am not talking about emails. In the time before electronic devices conquered the world, the word SPAM had a different meaning. It was canned pork, consisting of an assorted mixture of pork pieces, and that is about all I wanted to know about it. It really is not too bad, in my opinion, is if it is fried, covered in mayo and put on a sandwich. I watched my dad for many years carry the same thing in his lunch box. A SPAM sandwich, a bag of potato chips, a honey bun, a thermos of coffee, and an apple. Even as a young child I was intrigued by the can of meat my dad fried up for his work sandwiches. Intrigued because it was not something that my mom would have ever serve the family. So the only time I saw the strange looking mixture was when dad would fry it the night before. As a kid I would watch him unzip the can and plop the meat puzzle on a plate before he sliced if for frying. I also found it amusing that the preservative gel in the can had the consistency of clay. I should also add that not only would my mother not serve it to the family she would not even fry it up for my dad’s lunches. If he insisted on going the SPAM route he was on his own. It was not until I was a young teen that I ever tasted the stuff. I worked two summers with my dad in the Sundown Slaughter Field in West Texas, and every day he had the same thing. Do not misunderstand me, I have a ton of love and respect for my dad and how he worked in the oilfields, the addiction to SPAM was just an intriguing part of who he was. I tried it a few times when I started working in the oilfields. At the age of 16 I wanted to be an oilfield man, and apparently oilfield workers carried SPAM sandwiches. Like I mentioned it was not bad, but every day, geez it seemed like an unusual form of self-torture. I finally got the nerve one day to inquire from my father about the daily SPAM sandwich. His reply was, “son if by noon that is not the best thing you have ever ate, then you’re just not working hard enough”. I remember at the time thinking I had two choices, to review my work ethic, or find a different lunch meat. I came to love pickle loaf and turkey sandwiches.

Using my experience with SPAM I was able to lower the maintenance cost of one platform in the Gulf of Mexico by 30%. I had to tell the first part to give you a background on my experiences with SPAM. I also discovered that SPAM was not real popular with most people.

In the Gulf of Mexico during the boom years of the 70’s and early 80’s most of Pennzoil’s platforms had a cook. Contract crews and the production crews were always treated with a good meal and a clean room. When the profits started falling Pennzoil cut out the cooks, however the contract crews still expected to be cooked for and treated like guest. During this time I took over as part of my duties a smaller platform WC 563 that we had reduced to being manned by a single person for 3-4 days of the 7 day hitch. No longer having the luxury of a cook I keep a small food supply on the platform, and always kept a few cans of SPAM. I loved telling the story of my dad’s SPAM tendencies and would occasionally fry some up out of respect for him, especially when I had worked hard enough to test and see if I ever reached the plateau of work efficiency of my dad’s standards.

While on WC 563 I would have contract crews come onboard for a few days to do various maintenance projects. Of course they expected to be treated like guest, and since I was the only person on the platform they assumed it was my duty to cook for them. One day I served fried SPAM sandwiches, and I was amused at the negative affect it had on the contract crew. That is when I hit on an idea to reduce the amount of time any contract crew would want to stay on my platform with me cooking for them. I started keeping a case of SPAM on in the pantry in the Galley and served SPAM sandwiches. I was amazed at how quickly the contract crew would arrive on board, complete the project and move onto their next project. Most of the time they were on and off before the first plop of the SPAM puzzle hit the skillet. My reputation for SPAM spread through the Gulf very quickly.

Even when I would have one of own field technicians come on board they always brought their own food. The work efficiency on WC 563 took a drastic turn for the better. The wireline paraffin cutting crew became so efficient that the job went from a two day chore to a quick turn around from rig up to rig down in a mere 4 hours. They were off before the SPAM was done. Unfortunately for me because I had actually thought I had witness a half days work that would have met my dad’s standards and they left before I could test his theory.

May your boots be dry, your coffee fresh, and your gloves new. Amen.