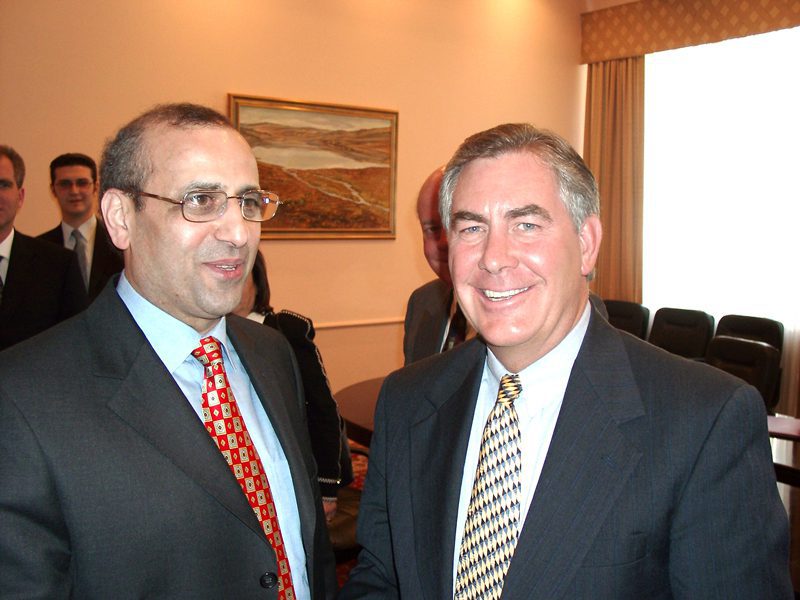 Igor Yusufov was the Russian Energy Minister from 2001-2004 under President Vladimir Putin. After his tenure as minister, he served as Special Envoy of the Russian President for International Energy Cooperation, and Ambassador at Large of the Russian Ministry of Foreign Affairs until late 2011. In 2011, he founded Fund Energy, where he is currently serving as CEO.

The following interview with Mr. Yusufov conducted over several email exchanges in March 2017. Mr. Yusufov’s responses have been preserved in their entirety.

What is Russia’s Energy Plan for 2017? What are the strategic initiatives the country will take?

Every initiative in the Russian energy sector, when we speak about strategic ones, are rooted in the energy strategy the Government adapted in 2003. The preparation of this document has been one of the serious achievements of the time when I was Energy minister between 2001 and 2004.

In accordance with this plan, the share of the energy industry in the Russian GNP is decreasing due to development of other Russian industries and in 2017 is expected to surpass in 25%. The share of hydrocarbons in the national export decreases too and is expected to be at 55% with oil production forecast of 548-551 million tons. This amount will be dependent from the possible prolongation of OPEC and non-OPEC crude production reduction adopted at the end of 2016. While recently, we are seeing a slight drop in oil prices, I am optimistic about the general impact of this OPEC deal move on international markets. I would propose to prolong this deal and to enter into talks with the US in order to prevent the markets from collapse when large amounts of American shale hydrocarbons enter traditional markets.

As for natural gas in 2017, Russia is expected to produce 640-650 billion cubic meters retaining its 17-18% share of global production. Russia will be ready to cover all its needs and to increase exports to countries where this commodity is needed to sustain enhanced economic growth. To be more specific, China and other Asian countries where growth is expected to reach an annual 10% in the coming years. But Europe could be among the destinations of enhanced Russian energy exports if forecasts of considerable economic growth are confirmed.

As oil prices climb based on Russian-Saudi agreements, how does Russia prepare for the US shale industry to ramp up and start flooding the market again?

My expectation is that massive shale exports from the US will not have too much economic impact if oil prices fall dramatically. This can be applied to both oil and gas. Additionally, there are certain technological restrictions, such as lack of LNG liquefaction plants and associated infrastructure that allow for the export of LNG on shale gas exports and the additional cost for transportation to both commodities.

I assert there would be an extension of the dialogue between Russia and Saudi Arabia’s agreement: In the first stage, the mutual interest could lead to the negotiation table with American representatives.

Drawing on the previous experience of the first ever crude production cut—I negotiated in 2001 as Russian energy minister with fellow OPEC ministers—indicates that even the fact that such talks could take place would calm down the markets and contribute to their mid-term stability.

From only the energy perspective, how does Russia want to work with the US? How would the two countries ideally cooperate within the energy industry?

The general idea is that this is not merely a mutually beneficial Russian-American dialogue in international markets stability which could bring the two energy superpowers to the idea of a closer cooperation.

Important oil and gas production projects have now been postponed due to sanctions. But through special government programs of import substitution of corresponding equipment, e.g. Arctic production, can be produced in Russia. Which means that American and European firms will not benefit from sanctions.

But with American technologies, management skills and investments this way could be much shorter – even shorter than in the case when Russia attracts partners from other countries.

Recalling high-tech exploration and production projects in the Arctic, the first association is that the partner of Rosneft was ExxonMobil. I am sure the results of this $600 million unprecedented technological achievement are now analyzed in Houston with common realization of the huge project. This is a striking example of the synergy our countries can show if the slogan of economical priority will be realized in American policies.

Meeting the Secretary of State Rex Tillerson (Former CEO of Exxon Mobil) from April 2002 I dare to assert: this tough and very professional master of energy diplomacy, whose skills will be now required in global diplomacy, has deep understanding of the US-Russian energy situation I described in this interview. This is the reason why, in a series of interviews, in the beginning of 2017 (the Guardian, BusinessWeek, Rigzone, Energate) I spoke in favor of a convocation of the Third Russian-American Commercial Energy Summit.

The summit’s format proved to be very effective since the two previous summits (2002 in Houston and 2003 in Saint Petersburg) gave the unique opportunity to gather both representatives of all interested government agencies and from private enterprise on both sides. Russian-American working groups for oil and gas markets, environmental protection and oil spill prevention functioned before and after the summits and made a serious contribution to the understanding of the possibility of the bilateral energy partnership. Projects were discussed which are still on the agenda. Russia has much to offer for companies known for possession of advanced technologies, excellent management, and investment capabilities. Furthermore, those who will be first, when political conjuncture will change and the doors will be opened (and this is inevitable), will gain from this cooperation.

For sure we understand, that many projects, e.g. Russian off-shore areas, could benefit from participation of companies as supermajor BP, Norwegian Statoil, France-based Total and Italy’s ENI. For skeptics, I would add that politically motivated sanctions represented a serious stress test for the Russian energy branch of government. But it was not a fatal blow. Russian scientific institutions are actively developing nearly 70 import substituting areas for oil and gas production, including electric energy.

In terms of investments, 2016 was a record year! Chinese Beijing Gas invested $1.2 billion into the Rosneft project Verkhnechonskneftegas; $5 billion was invested by the Indian ONGC Videsh Limited into East-Siberian Rosneft projects. Finally, the privatization of 19.5% shares of Rosneft with participation of the Swiss Glencore and the Qatar Investment Authority brought $10.2 billion to the Russian budget. As you can see, there are no American companies among participants of these deals. And this fact has to be remarked not only by readers of this interview from both shores of the Atlantic.

The US and Russia have “reset” relations numerous times. What do you think will be different under a new administration?

On the 6th of March, 2009, in Geneva, US Secretary of State Hillary Clinton presented Russian Foreign Minister Sergei Lavrov with a red button with the English word “reset”, which was mistranslated in Russian to “overload.” Coincidently, this “overload” is exactly what happened in bilateral relations. My sincere hope for a successful “reset” is based on a series of observations.

First, the restoration of economic ties has been prioritized by Presidents Putin and Trump already in their first telephone conversation in January. We can hope that energy as a cornerstone of every economic development is able to play the catalytic role for this restoration.

The second factor is a better understanding of Russia in the present US administration: and this is not merely the former Exxon Mobil CEO Rex Tillerson, who knows how to deal with Russia. Just remember the Davos interview of the Trump advisor Anthony Scaramucci who spoke about the positive attitude of the American president towards the common history of our countries and the fact that sanctions resulted in a closer embrace of President Putin by the Russian people.

The third consideration I already mentioned is the proclaimed priority of pragmatic and economic factors in American policies and the benefits of working together with Russia on energy projects.

What advice/recommendations would you offer the new Secretary of Energy Rick Perry?

Knowing Secretary Perry a bit after the first Russian-American commercial energy summit in Houston, Texas, in 2002, I am sure that this key position in the administration is now occupied by a person of rich knowledge of energy issue and challenges. In my opinion, the nomination of a politician of such experience to this position is a clear indication of the American desire to make energy an important element of the policy in a wide meaning of the word. Moreover, with pragmatism being the main principle of the new American paradigm, there are substantial hopes that the US and Russia will be able to cooperate on the huge field of energy projects. Exactly the way the $3-billion company Fund Energy does. The investment entity I founded six years ago managed to attract Halliburton as supervisor of the Fund Energy drilling operations in one of the Siberian projects despite the sanctions.

Finally, our experts would be glad to contribute to the convocation and preparation of the Third Russian-American Energy Summit since we have corresponding expertise and experts who negotiated the programs of the previous summits.