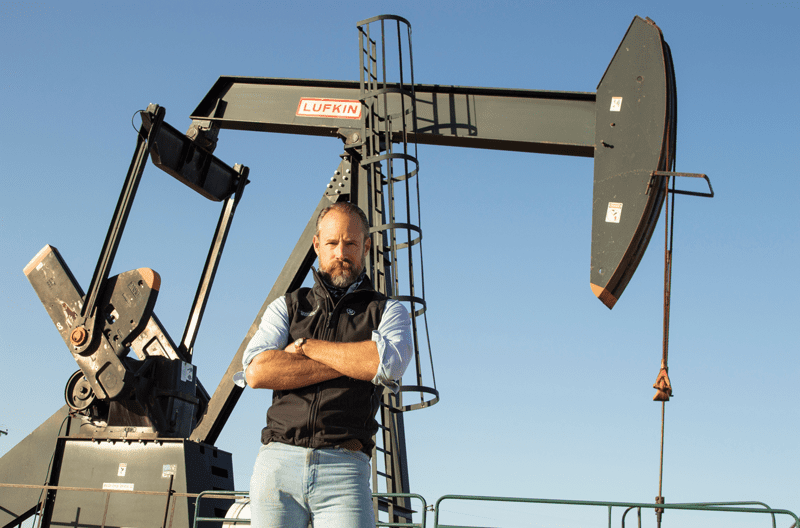 Having left the Beechcraft Bonanza G36 sitting in the steadily warming Texas sun, Jonathan Grammer is now three miles south of Haskell, Texas, watching the dirt fly from his legs as he brushes off his hands on his jeans. The property, forty-five miles north of Abilene, is meaningful to him, a test case in which he is actively developing not only the oil and gas rights, but also the solar, wind and surface acreage as well. While most of his counterparts and colleagues are either three hours north in Oklahoma, in the Scoop/Stack Play, or three hours southwest in Midland, elbowing their way into the Permian, Grammer is here in the quiet wind surrounded by miles of wheat fields. “Times are never bad,” he asserts. “It’s merely a time now to prepare for the next wave.”

“There’s a shallow Harber Strawn well just over that property line at about 4,700 feet [that’s] been producing since about ’82,” Grammer says, pointing off to the northeast. “One of the reasons I like this area is the abundance of shallow vertical wells that still need attention. There’s a lot areas like this throughout the Mid-Con region with all the same characteristics: recoverable hydrocarbons, good well structure, good available service companies, that can still be developed with minimal investment. They just need some good secondary recovery, someone to pay attention to them.”

It is early September and the temperature is climbing passed 85 degrees. Grammer has chosen to meet here in the dust to talk about the evolution of this business and his thoughts on the present and future of the industry.

Grammer readily admits he’s one of only a few that still promotes interest in the shallow vertical programs, mostly because the economics still work, he says. While most of the industry has gravitated toward multi-stage frac unconventional horizontal drilling programs over the past decade, not Grammer, founder of Grammer Land & Exploration Corp., a private land, mineral and royalty acquisition company, as well as Grammer Law Group, P.C., his small private oil and gas law firm. Whether acquiring oil and gas leases, mineral rights, royalty interests or representing legal clients, Grammer has long held firm to his affection for shallow verticals, especially in some of the more historic fields in Texas. Established nearly twenty years ago, Grammer originally formed Grammer Land & Exploration Corp. when he was a young independent landman. After a few years of contracting out the company’s legal work, he decided to resurrect his law practice in an effort to streamline productivity and drive down costs, and now maintains a group of four experienced oil and gas attorneys, in addition to himself.

“After about two years of full-time practicing law, I began buying oil leases in Seminole County, Oklahoma, in the Wilcox Sands, just about the same depth as around here. Two years after that I hired my first landman and, after about five years, had just over fifteen landmen working for me, mostly then in the Texas Panhandle.”

“Spinning off Grammer Law Group was well overdue. I’m really remiss I didn’t start to utilize my law license more in the early stages of my land career. I’d sworn off practicing law so that I could focus on land and acquisition. However, we began to see real issues in turn-around time for title opinions for not only ourselves, but also for our clients after we had handed off the upstream acquisition work. Rather than pull from the law schools for newly admitted associates, we began to staff up with older attorneys, some even retired from places like Devon and Pennzoil, who wanted to maintain a transactional practice and no longer wanted a brick-and-mortar law firm environment upon which to build a career. The result was not only landing some really qualified attorneys, but also expanding our legal services reach into Colorado, New Mexico, Oklahoma, Texas and Kansas.”

In watching the development of unconventional plays over the course of his career, Grammer has formulated opinions which, over time, have become cornerstones to his businesses.

“I have a stronger aversion to borrowing money than most which has prolonged a great deal of our growth; however, it’s resulted in a stronger portfolio. As a result, we were slower in getting into the working interest and royalty components of our oil and gas holdings simply because we would not finance. I think one of my prouder achievements will be over time having built these companies out of cash flow. It’s one of the enormous problems that came with horizontal drilling in my opinion. For all of its benefits, I see a perpetual plague on the industry in that it appears to be more driven by some really oppressive financial structures. Every few years Haynes and Boone out of Dallas puts out a spreadsheet listing volumes of oil companies that are entering bankruptcy protection. It breaks my heart for the industry because it’s unnecessary, but also for all employees and contractors that depend on those companies for livelihood. However, it has also served as a wonderful opportunity to add to our asset base. We’ve built a great deal of our mineral and production portfolio off of larger companies that have filed for Chapter 11 at times when we had good cash flow and few others did. I’d stop short of indicting the industry as a whole, but if the United States is ever to become wholly energy independent, it’s going to have to re-examine the way we finance oil and gas exploration.”

One of the beliefs Grammer holds true is that the ingredients for success are specific to the pursuer. As a result, many of his beliefs and ideals are almost of a time gone by, apparent not only in the way he talks, but the way he stands here in this dusty pasture. There is an air about his mannerisms that seems well beyond his forty-five years of age and more akin to an oil and gas industry now far gone. It is apparent even in his prophecies for the industry, and for the country, in looking toward the future.

“Without a doubt, the primary objective for the next generation needs to be eradicating the dependency of the United States on foreign energy. Regardless of the political rhetoric and its proclaimed solutions, it’s a national security issue, plain and simple. The evolution that needs to take place is making domestic energy more affordable to obtain. That is not going to come from merely drilling more wells in the Permian Basin. That is one of the obvious elements of this little part of central Texas: the nexus that already exists between oil and gas and the alternative energy industry. It is becoming more common, and I think we need to pay closer attention to how solar panels, wind turbines, electrical transmission, and oil and gas development are beginning to occupy the same landscape. There will not be one sole energy source dominating the other, but rather trying to find solutions that incorporate all of them into a powerful energy infrastructure. That is the only way in which the United States can truly triumph over this massive problem in importing oil from the Middle East.”

“If the political momentum that is presently devoted to special interest groups could be redirected into a national objective of making the country more energy independent as opposed to facilitating development of our individual industries, we could truly be unstoppable and truly put us in a position to effectively compete with nations like China and Saudi Arabia. In the end, we don’t have enough oil to move the needle globally, we don’t have enough coal, or solar and wind, but the conglomerate of all of those energy sources together would be unmatched and would effectively make each individual industry more economical.”

Grammer Land & Exploration Corp. and Grammer Law Group, P.C., maintain offices in Amarillo and Dripping Springs, Texas, and Oklahoma City. A native of Austin, Texas, Grammer is the father of three and married to wife Claire, also an attorney.