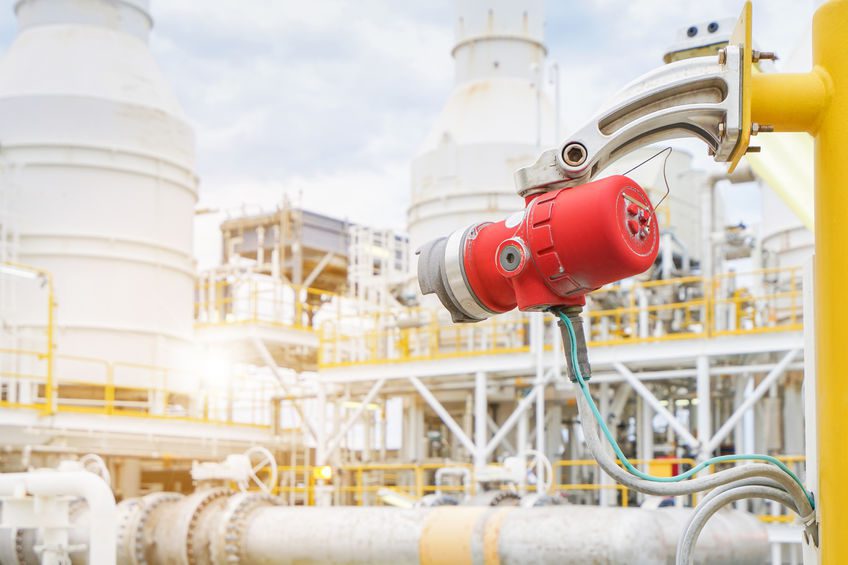 FGS (Flame and gas detection systems) are increasingly critical to the protection of people, the environment, and, ultimately, the profitability of oil and gas operations. But despite the application of seemingly best implementation practices, many leaks go undetected for unnecessarily long periods of time. Part of the problem relates to judging mitigation effectiveness based primarily on device availability without adequate factoring of coverage density. Effective detection is not possible, however, unless both device availability and coverage density are taken fully into account.

An FGS typically consists of at least four main components: a flame detector, a gas detector, a communications interface and a control component such as a PLC. In the classical bowtie model of safety protection (Figure 1) flame and gas systems are traditionally classified to the right, with other measures implemented to mitigate damage after a toxic or combustible substance leak has occurred. This contrasts with SISs (Safety Instrumented Shutdown systems), which are classified to the left side, with other measures companies take to prevent accidents.

A common method for assessing effectiveness is to identify the causes of accidents and isolate them into protective layers guided by what is known as a LOPA (Layers of Protection Analysis), which is commonly used in the design of SIS (Safety Instrumented Systems). A LOPA study, for example, might reveal the need to shut down a feed pump so that an overpressure will not cause leakage of a toxic or combustible gas downstream in the process. While this type of analysis applies well to prevention techniques on the left side of the bowtie, it may not be as helpful for mitigation if the problem spreads past any safety barriers that are typically represented on the right side of the bowtie.

“Fire and gas-related failures do not necessarily map to a historical linear model in which one barrier field kicks over to the next barrier field and so on. Instead, incidents occur when several latent lagging barriers converge with a set of process conditions at one time,” said James McNay, a lead consultant for MICROPACK, a provider of fire and gas mapping solutions.

As the ISA (International Society of Automation) describes the difference in its “Guidance on the Evaluation of Fire, Combustible Gas and Toxic Gas System Effectiveness,” LOPA typically considers only two possible states for a candidate protection layer: success or failure. If the protection layer fails, a hazard could occur. If the protection layer succeeds, the propagation of the hazardous event is halted and no hazard results. While this is an appropriate assumption for many independent protection layers, it is not suitable for FGSs since they are not intended to stop the hazardous event from occurring. Instead, the objective of an FGS is to prevent an already bad situation from getting worse (i.e., mitigation).

Mitigation effectiveness, then, is mostly about detection. If the gas leaks slowly over time, for example, and doesn’t reach the detector’s alarm threshold, it doesn’t matter how reliable the component itself is; if the detector doesn’t sense the leak at all, device location becomes the critical issue, not performance. The denser the coverage, the greater are the chances of the detector sensing a leak.

Effectiveness of an FGS is a function of the percentage of the potentially hazardous areas they cover and their performance in detecting anomalies in those areas, as represented by the following formula:

Results of a study presented at the Ninth International Seminar on Fire and Explosion Hazards help illustrate this. The researchers set out to understand why 60 percent of gas leaks on offshore platforms went undetected while many platforms reported they were applying best practice performance coverage of 80 to 95 percent.

Analysis of 18 offshore platforms, however, showed an average coverage of only 57 percent.1 Although the researchers did not provide availability data for the actuators, if we hypothetically max out the availability to 100 percent, we still end up with an effectiveness number of only 57 percent. However, if we increased coverage to 80 percent (the low end of the stated performance targets), it would not be difficult to achieve a much higher effectiveness of 80 percent.

The sooner the detection system detects a loss of containment, the more effective it will be in mitigating the problem. And how fast a leak is detected depends more on coverage than its response time.

Thinking of an FGS system as for mitigation only also overlooks the potential role that the system can play in prevention. Leak detection, for example, can identify small but credible leaks that could indicate mechanical integrity failures such as corrosion, leaks which are typically below the threshold that instrumented systems might discover. Users with a low tolerance for risk might seek to guard against all possible major accident scenarios by maximizing coverage of gas detectors, alarm and site emergency planning. Users with a higher tolerance for risk, on the other hand, might limit the gas detector placement to locations where the gas from processes would exceed a predictable concentration level. The choice is between putting your plant and environs in jeopardy and spending heavily for protection you may or may not need.

Resolving the Dilemma with Wireless

Today, advanced density mapping combined with advancements in wireless communications and battery life make such tradeoffs less severe. When faced with costs of up $50,000 to wire up a leak detection solution on an offshore platform, for example, risk tolerance is a major factor in accident mitigation. But now that it is economically possible to implement up to five wireless gas detectors (i.e., increased coverage density) for the total installation cost of one wired detector (i.e., better device availability), safety no longer needs to be compromised in the name of cost.