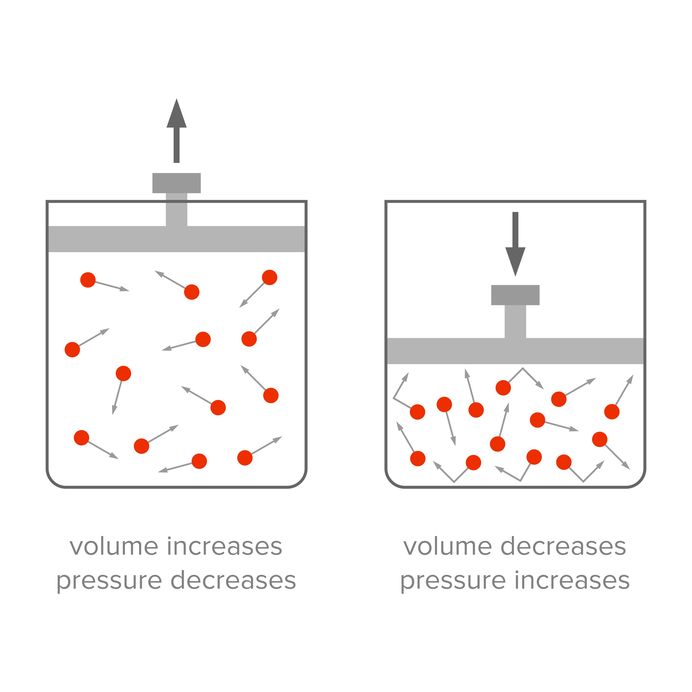 It is well known that, if all things being equal (or in Latin ceteris paribus or caeteris paribus), the volume is directly proportional to temperature and inversely proportional to pressure, which are applied to it. In other words, under constant temperature and pressure, the relationship between the volume of gas and the number of moles is direct. This law is known as Avogadro’s Principle or Avogadro’s hypothesis and was first published by Amedeo Carlo Avogadro (1776–1856), an Italian scientist, in the year 1811.

For those who prefer a mathematical language, we refer to Avogadro’s original and simple modified equations:

V ÷ n = k, which means that the volume amount fraction will always be the same value, if the pressure and temperature remain constant.

Let V1 and n1 be a volume amount pair of data at the commencement of our research. If the amount is transformed to a different value called n2, then the volume will be altered to V2.

This equation of V1 ÷ n1 = V2 ÷ n2 will be very useful in cracking Avogadro’s Law problems. Here is the Law articulated in fractional form:

Vo – an original volume in the same units

Pn – a new pressure in the same units

Although the Avogadro’s Law relates to an ideal gas (an abstract, theoretical gas composed of many randomly moving point particles whose only interactions are perfectly elastic collision), the above equation is actually good (universal) for any gaseous or liquid hydrocarbons.

These U.S. measurements are the most commonly used, if not specified or if unknown, worldwide to define the volume of what is termed “Sm3” (Standard cubic meter). [FYI: The earlier International Union of Pure and Applied Chemistry (IUPAC) definition of the STP (273.15 K and 101.325105 kPa), “is now discontinued worldwide,” as if it was ever used in the States or elsewhere.]

It is noteworthy that the aforementioned “standard” and “normal” indicate that these units are not strict volumes of gas that are flowing but quantities of gas. An SCF corresponds to one cubic foot of gas at 60°F (15.6°C) and 14.73 psia, while a Nm3 corresponds to one cubic meter of gas at 15°C and at 101.325 kPa or 760 millimeters in a mercurial barometer (760 mmHg). This is about 29.9 inches of mercury and represents approximately 14.7 pounds per square inch (psi).

Sometimes, other sets of volume-measurement units are utilized. In particular, Normal Temperature and Pressure (NTP) are commonly used as a standard condition for testing and documentation of air compressors, blowers and fans capacities: They are defined as 20°C (293.15 K, 68°F) and one atm (101.325 kN/m2or kPa, 14.7 psia, 29.92 in Hg, 407 in H2O, 760 torr). A fan that produces a static pressure of 3 in H2O (a good average value) will increase the absolute air pressure by 3 (in H2O).

Worldwide industrial applications have the so-called Standard Ambient Temperature and Pressure (SATP), which are also used in chemistry as a reference with a temperature of 25°C (298.15 K) and pressure of 101.325 kPa and may be called “normal conditions.” Under these conditions, the volume of one mole of a gas is 24.4651 liters.

The Montreal-based UN International Civil Aviation Organization (ICAO) invented “the international standard atmosphere at sea level” (101325 Pa or 760 mmHg with a zero absolute and relative humidity), which is often called “normal pressure” and uses the following measurement conditions:  288.15 K or 15°C and 101,325 Pa or 760 mmHg.

In Europe, Australia and Latin America, for example, the STP conditions used by the International Organization for Standardization (ISO) (that are 15°C and 101.325 kPa) have been adopted, as a rule, and are used as the base values for defining the standard cubic meter.

If taken in absolute physical terms, with gas production in Russia now standing at some 730 bcm a year and that of crude oil and mixed/leased condensate at over 560 mta, this is more than what was actually produced last year in Vietnam (9.6 bcma or 0.93 bcfd) or Peru (6.4 mta or 154 kb/d) or Russia (Table 1).

For its energy measurements, Russia (like the IEA and the PRC) officially uses an energy unit of tonne of oil equivalent (toe), which net calorific value (NCV) is defined, by convention, as follows:

A similar energy unit – barrel of oil equivalent (boe) – is often used in the U.S. for energy comparisons and combinations. This is a unit of energy based on the approximate energy released by burning one barrel (42 U.S. gallons or 158.9873 litres) of crude oil. The BOE is used by oil and gas companies in their financial statements as a way of combining oil and natural gas reserves and production into a single measure, although this energy equivalence does not take into account the lower financial value of energy in the form of gas.

Over the northern border, in Canada, the toe is used by the country’s ministry of energy – the National Energy Board (NEB) – and leading Canadian energy companies. NCV of this energy unit is defined as 41.868 gigajoules (GJ) or 10 gigacalories (Gcal) (see above). For natural gas and NGLs, cubic metres (m3) are used and measured at 15°C and 101.325 kPa (760 mmHg), which means that Canadian STP fully corresponds to those used in the EU (see above).

In Russia and the other former Soviet countries, the tce (see above) is widely used for energy comparisons. This energy unit is usually called tonne of standard reference fuel (trf), net calorific value of which is defined as 29.3 GJ or 7,000 kcal. In this case, it equals 0.7 toe and refers to energy contents of various fuels in (Table 2).

1 To be exact, an even larger difference should be attributed to volumes (of natural gas) exported by Russia to the EU (almost 1.74%). 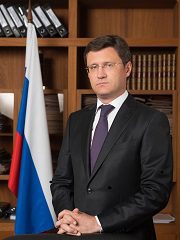 Alexander Novak is Minister of Energy of the Russian Federation, Chairman of the Board of Directors of Transneft, a member of the Board of Directors of Rosneft; Gazprom and of the Supervisory Board of Rosatom. In 1993, he graduated from Norilsk Industrial Institute as a specialist on Economy and Management in Metallurgy. In 2009 he graduated from the economic faculty of the Moscow State Lomonosov University (evening education) as a specialist on management. On May 21, 2012, appointed Minister of Energy by Presidential Executive Order.