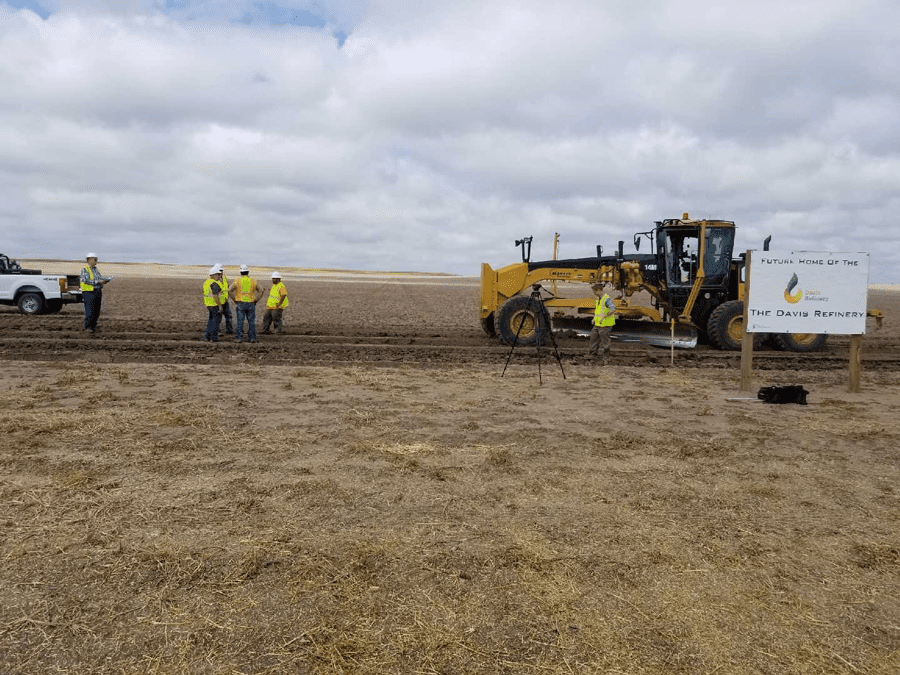 Meridian Energy Group is well underway with its efforts to build the Davis Refinery. Davis, commonly referred to as the “Cleanest Refinery on the Planet,” was permitted as a synthetic minor source by the NDDoH (North Dakota Department of Health – Air Quality) after an extensive 18-month review. This PTC (Permit to Construct) issued by the NDDoH validated all of claims Meridian had made over the past four years when they undertook the challenge to “clean up” the refining industry. Meridian commenced construction in July near Belfield, North Dakota, east of the Fryburg Rail Terminal just a month after the NDDoH issued the permit. The company contracted with SEH D|B out of Bismarck, ND to take on a significant portion of the project, executing grading and other site work activity that is necessary for the refinery.

SEH D|B will lead civil construction activities by refining site grading plans to establish final grades and contours. Initial construction activities will include: the installation of erosion control devices, stormwater pond development, and ditch shaping to establish vegetation and ensure runoff, which will be addressed to protect surrounding areas and existing waterways.

According to Dan Hedrington, SEH Principal and Senior Project Manager, “This is truly a history-making event and we are eager to get started on the site work. The Davis project is an extremely environmentally sound project, and will no doubt positively impact the refining industry, North Dakota and its residents.”

The contract with SEH D|B employs a team of local subcontractors from Belfield and surrounding areas. Martin Construction Inc., Dickinson, North Dakota’s premier earthwork construction company, will be the primary site developers for the civil construction. Martin Construction President, Kurt Martin is eager to join the Meridian cause and deliver the various benefits the Davis Refinery will bring to the Bakken. “It’s exciting to be part of a project that brings economic stability to western North Dakota and features key advancements to cleaner refinery methods,” says Martin.

Meridian has not only been busy with construction in North Dakota, the company has also expanded its Engineering and Projects operations in Houston. Meridian recently signed a long-term lease with Boxer Property for a 10,000 sq. ft. building to accommodate its Engineering and Projects departments. The new offices, in the Greenspoint district of Houston, are strategically located near both The Woodlands and IAH Airport. This Houston location will include a full digital integration in order to interface in real time with Meridian offices in North Dakota and California.

This expansion came just two months after Meridian was issued the PTC for the Davis Refinery in Billings County, North Dakota, and subsequently began earthwork and other site preparation work at the Davis site. The continued expansion of the Meridian presence in Houston will ensure the timeline for the Davis Refinery will remain on schedule for design and construction of Davis, with full commercial operation scheduled for late 2020. Meridian’s Houston operations will also facilitate access to the professional staffing required for the development, engineering and contracting for future refining and other projects that are currently in the planning stages.

Lance Medlin, Meridian EVP of Projects, led the lengthy process of determining the ideal site for Meridian’s new office. “We are fortunate to have developed a partnership with Boxer Property that we allow us to continue the development of the Davis Refinery as well as our future projects. This expansion gives us the ability to house our Project Teams in one facility, giving us better efficiencies and momentum for moving our projects forward,” says Medlin.

Chad Hope, Meridian CFO, also expressed his enthusiasm for the continued expansion. “This growth is both a result of Meridian’s progress and the exciting future opportunities we’re being presented with and represents the most cost-effective manner of meeting our current and future needs,” says Hope.

Meridian is confident the Davis Refinery will become the blueprint for all refinery products that follow it. Leveraging BACT (Best Available Control Technology), Meridian has literally set the new green technology design standard for modern oil refinery and has redefined what’s possible in applying true innovation to all phases of the process – construction, operation, emissions control, and of course, ongoing regulation and monitoring.