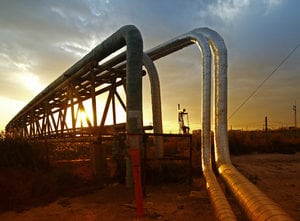 Findlay, Ohio-based MPLX LP announced on Feb. 13 that it agreed to purchase the Ozark Pipeline from Enbridge Pipelines, LLC. MPLX is a limited partnership that was formed by Marathon Petroleum Corp. in 2012 with a focus on acquiring and developing midstream energy infrastructure assets. The firm agreed to pay Enbridge $220 million for the 433-mile pipeline.

The Ozark pipeline runs from Cushing, Okla., to Wood River, Ill., and has a capacity for transporting 230,000 barrels of oil per day (bpd). However, MPLX is looking to further expand the pipeline’s capacity, as evidenced by the fact that the firm sent a petition to the Federal Energy Regulatory Commission on Feb. 16 in order to receive approval for such a project.

The planned expansion project, if approved, is expected to be completed in 2Q18, with enhancements consisting of increased horsepower at pump stations and added drag-reducing agents for oil movement. The MPLX release also notes that Enbridge recently acquired enough long-term commitments to increase the capacity of the pipeline to roughly 345,000 bpd.

“Ozark Pipeline will expand the footprint of our logistics and storage segment by connecting Cushing-sourced volumes to our extensive Midwest pipeline network,” Don Templin, president of MPLX, said. “We believe MPLX is extremely well-positioned to grow through a combination of organic projects, dropdowns from our sponsor Marathon Petroleum Corporation, and third-party acquisitions.”

Enbridge and MPLX further announced on Feb. 15 that they closed on a joint-venture investment in the Bakken Pipeline system. The two companies will share an indirect equity interest in the Dakota Access Pipeline and the Energy Transfer Crude Oil Pipeline projects.