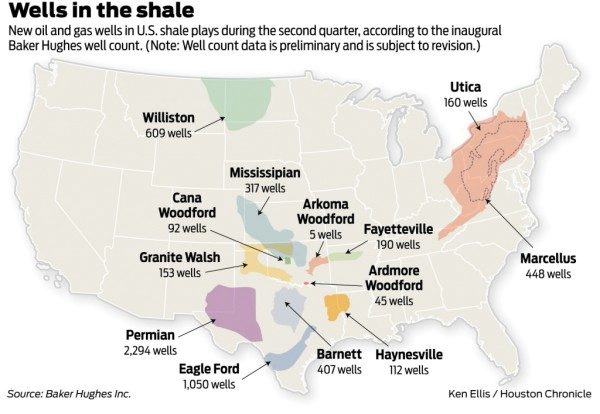 Oil field activity in South Texas is adding up to lots of new wells. In the last four quarters, operators have drilled 4,092 new wells in the Eagle Ford Shale, according to a new quarterly count of U.S. wells from Baker Hughes.

In the second quarter of this year, there were 1,050 new Eagle Ford wells – which means each rig working in the region drilled 4.56 wells. The quarterly well count is a new measure from the Houston-based Baker Hughes, which also releases a rig count on Fridays. There were 9,061 wells in the Permian Basin in West Texas in the last four quarters – by far the biggest number of new wells in the U.S. The Williston Basin (also known as the Bakken Shale in North Dakota and eastern Montana) had 2,357 wells. The Marcellus Shale in Pennsylvania had 1,801 new wells in the last four quarters. And the Mississippian Limestone, an oil field in Kansas, had