The University of Oklahoma School of Law hosted an executive seminar which focused on the short and long-term outlook for the energy sector. We invited various experts to make a presentation on what they see ahead for the sector.

An interesting theme that emerged was that the public has vastly overestimated the ability of alternative fuels to meet the growing global demand for energy. Granted, wind turbines and solar will make large inroads to the electrical market. But globally, demand for oil and gas continues to expand at a pace of roughly 1.5 million barrels per day per year. More importantly, the demand growth is relentless. Price variations don’t have much impact on demand.

This year, for the first time in history, global demand for oil will exceed 100 million barrels per day. Factoring in the decline rate in existing fields, this means that at least five million barrels per day of new production must be brought online to keep supply steady. And since oil and gas exploration is not inexpensive, additional amounts of capital will be required to fund these efforts.

The experts noted that the public—in part misinformed by the press—has taken it for granted that electric vehicles, alternative fuels, solar and wind turbines will replace oil as we move forward. One of the speakers claimed that in a survey he conducted in a MBA course at a highly regarded California institution, 70% of the students were of the opinion that the oil industry would not even exist in 20 years!

When confronted with the most optimistic electric vehicle forecasts, and the relentless growth of vehicle use globally, the MBA students were silenced as they tried to reconcile their opinion about the future of the industry and the need for oil to power global auto fleets.

The Permian Can’t Save the World

The misperception that the oil industry has a limited future has resulted in a massive misallocation of capital in the opinion of several speakers. Or at least in a misvaluation of oil assets. In light of the rapidly declining global oil inventories, the relentless growth of oil demand, and the fact that we are entering the period of the year when global demand for oil is at its highest the price should be moving higher—possibly much higher. The lack of capital spending on major non-U.S. projects over the last three years has hurt available supplies.

The misvaluation of oil assets might be a result of the perception that supply growth in the U.S. from unconventional plays is limitless. Issues with water sourcing, sand availability, personnel and equipment shortages, and the lack of sufficient pipeline takeaway capacity expose the flaws in this assumption. 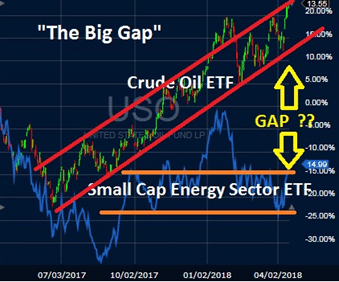 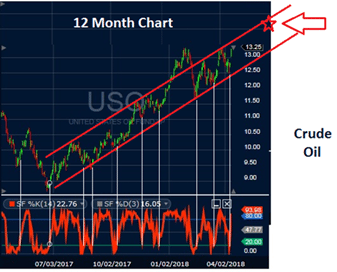 Keep in mind the unconventional wells have large decline curves. So when drilling and

completion efficiencies peak, the basic assumption that shale oil is limitless will be exposed as a myth. This in turn will be a shock to some analysts and the public.

With this in mind, one of the experts noted that over the last twelve months—for the first time in at least five years—initial production rates fell in a number of unconventional plays. Completion efficiencies fell while completion costs increased. The type curves indicate that the estimated ultimate recoverable reserves will not be as large as those seen a year earlier, all else equal. Which means “a lot more wells will need to be drilled to get the gains analysts are taking for granted”—a huge stimulus for the service sector.

Taking all this information, together we took a look at the twelve month chart of crude oil prices; actually, the chart is the oil ETF (USO) that can be traded online. There is some ‘tracking error’ in the security. Historically, the shares of energy producers correlated closely with the price of oil.

Examining the ‘buy’ signals that have been generated over the last year, they forecast a bullish short-term move in oil. With hostilities and political issues in the Middle East, it appears that oil could move higher sooner rather than later.

But note that over the last nine months oil and gas equities, as measured by a small cap energy sector ETF (PSCE) have diverged quite impressively from the price of oil.

So the bottom line is that logically, either energy equities (1) begin to outperform or (2) the price of oil declines as we move forward.

We expect the gap to be closed as energy companies and assets are revalued to reflect the higher oil prices we expect in the near future. Merger and acquisition activity will also pick up as we have seen recently in the Permian Basin, which will also drive equity prices upward.

Despite the public skepticism about the oil sector, in our book it looks like 2018 will be a very good year.