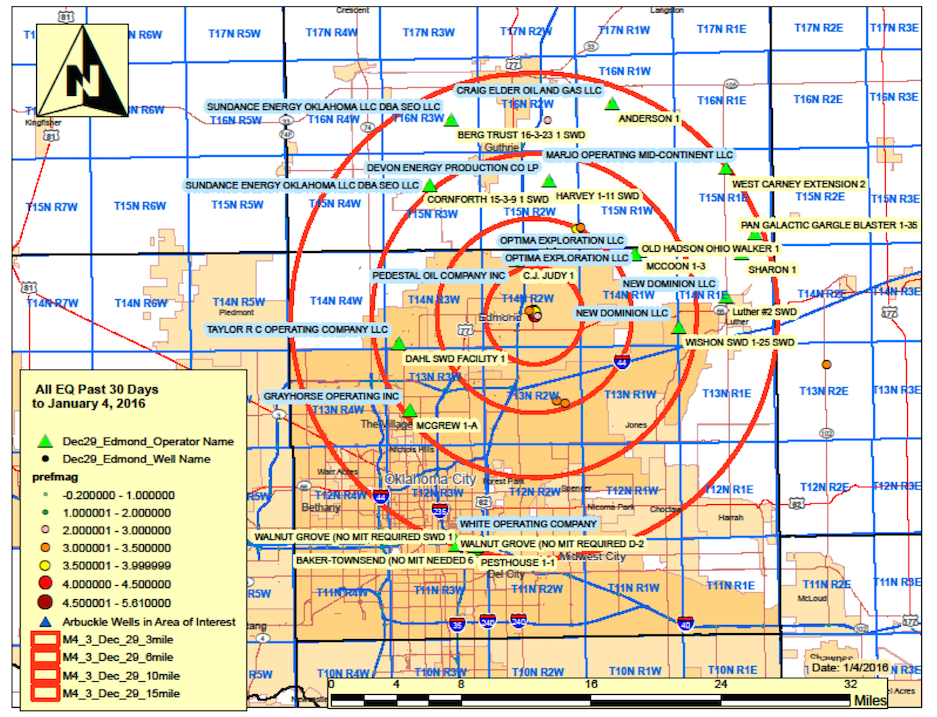 The Oklahoma Corporation Commission’s Oil and Gas Conservation Division (OGCD) has called for disposal wells injecting into the Arbuckle formation to curtail operations in reaction to two large earthquakes which struck the Oklahoma City suburb of Edmond, Okla., the week of Dec. 28, 2015.

Wells located 10-15 miles from the epicenter are being allowed to maintain current levels of disposal at this time, according to a document released by OGCD Director Tim Baker.

These reductions are being made in hopes that they will help reduce the potential risk of induced seismicity.

“We are working with researchers on the entire area of the state involved in the latest seismic activity to plot out where we should go from here,” Baker said. “We are looking not only at the Edmond area, but the surrounding area as well, including the new seismic activity that has occurred in the Stillwater areas.”

The plan also includes inspection of reservoir pressures of all Arbuckle disposal wells located within 15 miles of the epicenter of last week’s earthquakes.

Edmond was first hit with a 4.3 magnitude earthquake on Dec. 29, 2015. The quake, recorded at 5:39 a.m., left many residents near the epicenter with property damage and without power.

A series of aftershocks also shook the area.

Edmond residents started New Years Day off with a bang as a second large earthquake, registered magnitude 4.2, struck the area in the early hours of the morning.

With the almost 50% rise in earthquakes over the past year, Oklahomans are no stranger to shaking. However, this particular string of quakes has garnered hordes of attention among Oklahoma residents, given that these high magnitude earthquakes are occurring seemingly out of nowhere in a highly populated metropolis.

Oklahoma has been hit with more than 800 earthquakes of magnitude 3.0 or greater during 2015, according to the U.S. Geological Survey.