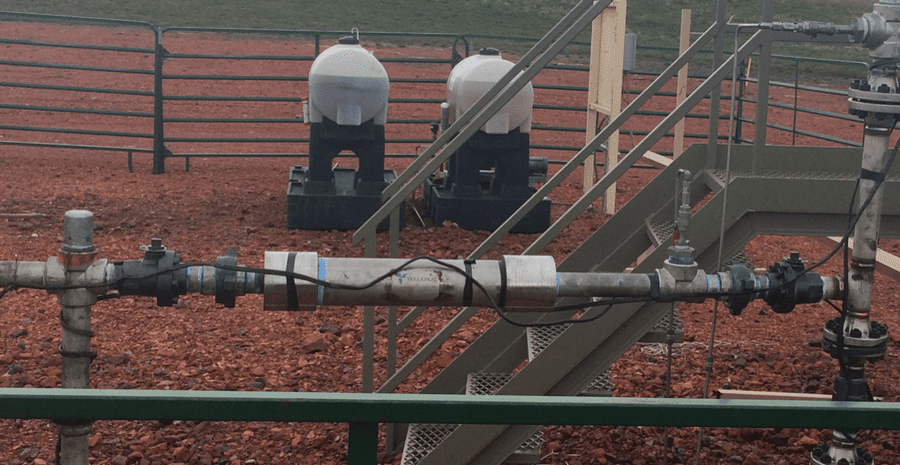 Ongoing chemical treatments are among the top production costs in almost every basin, coming in at around eight to ten percent on average on the low end. As oil prices whipsaw across the line between profit and loss, producers are looking for ways to manage every possible cost, including chemicals.

For efficiency’s sake, most operators rely on the expertise of the chemical provider to assess the mix and dosage of chemicals to protect equipment from scale, corrosion, paraffin and other elements that can interrupt production and create significant replacement costs. In evaluating costs, operators lack the time and chemical suppliers lack the incentive to determine dosage efficiency as long as the treatment is basically working. The assumption has been, “It’s working, so we must be doing it right.”

A series of discoveries in the remote oil fields of Montana led to the development of a tool that could significantly reduce chemical requirements through better blending of those chemicals with the production stream.

A 2005 inspection of tubing being removed from a Montana well during an electric submersible pump (ESP) replacement offered a major revelation. As the North-Pole-frigid December morning air met the tubing, globs of a gooey, scaly substance were evident with the top 20-30 joints of tubing, globs that quickly peeled off onto the ground. Subsequent testing showed this to include some scale, but to mostly consist of the concentrated treatment chemicals. Anecdotally, other workover crews have reported seeing this kind of mass on ESPs where chemical is flushed down the casing.

This epiphany was huge. It meant a large percentage of the chemicals never reached the downhole equipment they were intended to protect. That field was dotted with stripper wells, whose water cut reached as high as 98 percent, producing 500-4,000 barrels a day. In that environment, pump replacements costing $75-$125,000 coming at about three-and-a-half year intervals often mangled profits for this operator and others.

Most of the larger chemical suppliers had left the area 20 years earlier due to falling demand for their products as a result of shrinking production. A small local provider, N-Run, founded in 1999, was behind the discovery of unmixed chemicals on the tubing.

The solution appeared to involve the insertion of an in-line static mixer into the sidestream flow at the point of chemical injection just prior to discharge into the casing, before dropping to the fluid level. This mixer would cause mass transfer, as calculated by the Reynolds number (Re), creating fluid turbulence in the pipe. The resulting turbulence would induce a mixing action, much like a spoon blending the ingredients of a cake recipe. It would transfer chemical mass into the fluid mass. Other industries have long used static mixers to reduce chemical consumption, so it seemed logical to apply it to oil and gas.

Depending on the well and the chemical design, that fluid mass could be single phase—oil alone with a trace of produced water—or it could be three-phase, consisting of gassy fluids with a 50 percent water/oil mix. Increasing the contact capacity of the treatment chemical with the fluid itself is clearly the most fundamental factor in improving the chemical’s performance.

To create and test such a mixer, Tellerus came into existence in 2007. The company’s development team created a static mixer with baffles and vanes inside the pipe, which would cause the liquid to churn and spin as it passed through. That action would create the needed Reynolds number, allowing the complete mixing of chemicals with the fluid.

One challenge with this turbulence is that it can cause cavitation erosion over time. Early trials used carbon steel in device manufacture, which proved to last only a few months due to corrosion caused by the bubbling out of acid gases, including H2S and CO2, that had previously been dissolved in the liquid. This is similar to the way a soft drink bubbles and foams when the can is opened.

Switching to 316 stainless steel solved the issue of corrosion in almost all cases. In a Williston Basin installation involving high levels of H2S, the operator preferred not to pay the premium for stainless steel, so Tellerus used Schedule 80 carbon steel for the casing. Because the internal baffles take the greatest stress, they were still made of 316 stainless steel. This proved to be effective.

Tellerus’s personnel inspects units at regular intervals (previously six months, now approximately two to three years depending on well volume), but there have been almost no leaks or replacements since the switch to stainless steel.

Further design tweaks led to greater efficiency, less welding and other improvements. Most components are threaded, simplifying field inspection and documentation. Welded or bolted flange fittings are also available for producers who prefer them to threaded joints for pressures above 125 psi. Units are available in lengths of two to eight feet.

The mixing stack inside the tool housing does create a small amount of back pressure (eight to ten percent) due to baffles in the static mixer, but field trials have shown this to be more than overcome by the improved performance achieved through better mixing of chemicals. 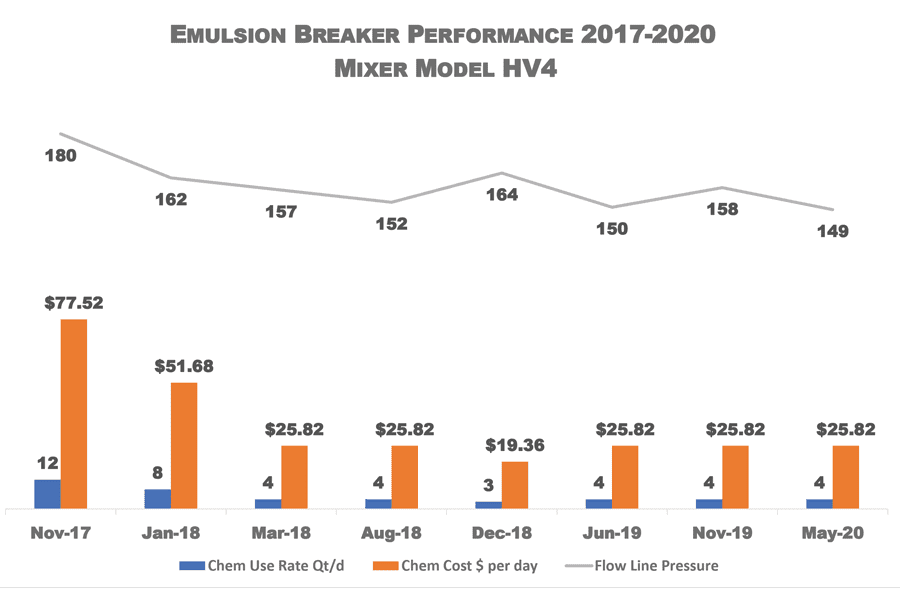 Field Trials for Phase One

Field tests initiated in 2008 involved installing static mixers in the treatment sidestream flow of several wells whose ESPs failed at the previously stated three-and-a-half year intervals, in spite of extensive uses of scale and corrosion inhibitors. As of this writing, the wells with mixers installed at that time are still in service 12 years later.

In another field trial, the mixers were installed on several leases using emulsion breakers to treat flowlines at the surface. Here the improved mixing of chemicals resulted in a 35 percent drop in flowline pressure (from 150-175 psi to 110 psi), which helped boost production by six barrels per day.

Early phase testing made no adjustment in the amount of chemicals injected. During the downturn of 2015, however, clients began looking for ways to reduce costs, and chemical injection rates were on that list. They asked Tellerus to experiment with lessening scale and corrosion-reducing chemicals and monitoring the results. The goal for the operators in question was to cut chemical costs by 40 to 50 percent.

The trial reduced injection rates to approximately 60 percent of previous levels while continuing to use the same chemicals. At this writing, five years later, there have been no observed increases with corrosion or scale since making that change.

The Tellerus mixers installed in the trial improved oil/water separation with a 400 percent reduction in oil carryover. Tellerus then expanded that trial to other types of treatment, including multifunction inhibitors, with similar results.

Numerous users have observed that this is a seemingly simple solution, but its results are profound. Most units pay for themselves in a few months, even on stripper wells like the ones in Montana. Field trials have shown that the greater blending of chemicals with the liquid have greatly enhanced the effectiveness of those chemicals. Effectiveness improves to the extent that the amount of chemicals required can be reduced by 40 to 80 percent in most cases.

The patented static mixer design was among the finalists for the 2019 National Association of Corrosion Engineers (NACE) Corrosion Innovation Award international competition. It is also under consideration for adoption by the technology wing of a supermajor oil company. The Reynolds effect is valid at any flow rate achievable in the oil patch. It is clear that this solution is not just for small wells; larger wells stand to benefit even more from this tool.

Headline photo: This challenging installation in the southern flank of the Williston Basin was using 10.5 qt/day of emulsion breaker to treat 18 gravity tight emulsion at 55˚F Red River crude. It produces 220 barrels of fluid daily at a 60-40 oil/water ration. Over a five-year period, several chemical providers tried repeatedly to find a more effective and economical mix. Within 90 days of installing the inline mixer, chemical usage was reduced to 4.5 qt/day, saving the producer $14,147 per year in chemical costs.

Paul Tarmann is founder and CEO of both N-Run and Tellerus Corporation. He has 38 years of experience in upstream oil and gas production chemicals, working with a broad range of applications common to all basins worldwide. Tarmann is a member of the National Association of Corrosion Engineers and also a lifelong member of the Society of Petroleum Engineers. The Tellerus website is www.tellerus.com.