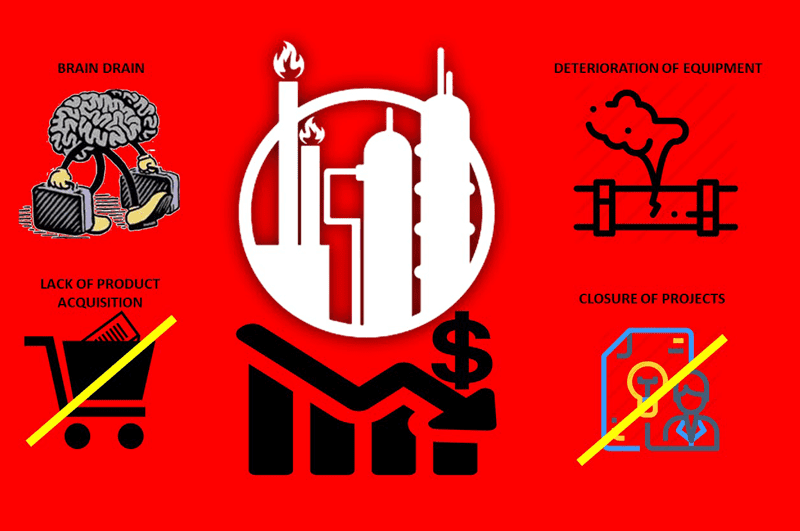 The petrochemical industry has a vital importance for the development of nations. This industry is a fundamental platform for the growth and development of important industrial chains such as textiles and clothing, automotive and transportation, electronics, construction, plastics, food, food fertilizers, pharmaceuticals and chemistry, among others. Given the value that this industry has as the first link in important productive chains, it is essential that for it to be strengthened and thus be able to supply the national industry with the inputs that it requires.

How Does the Petrochemical Industry Work?

First, we must know what petrochemical means. This is nothing more than a branch of chemistry that studies the transformation of crude oil (petroleum) and natural gas into useful products or raw materials. These petrochemicals have become an essential part of the current chemical industry worldwide.

The petrochemical industry is nothing more than a link in a multi-point chain. To focus the article a bit, one must begin by breaking down the main stages that constitute the oil industry.

In this article we will move according to the fifth stage, that is, petrochemical companies.

Effects of the Economic Crisis on the Industry

As we know, economic crises happen anywhere and at any time, it can be regional or global. When the crisis is regional, the solution to this problem may be simpler than when it is taken to global magnitudes.

A regional economic crisis can be due to bad political actions, effects of a war, among others. By giving a great example we can see what is currently happening in Venezuela where, because of inefficient political actions that have been taken for more than 20 years, the country has been plunged into its worst economic crisis. Since for political reasons there is an economic and oil blockade from several countries, this makes that one of the many industries that make life in this country, the petrochemical industry are critically affected. Here are some of the most important effects that the main national petrochemical company takes from the Venezuelan economic crisis:

These are some of the most important effects that the petrochemical industry is subjected to when there is an economic crisis in a country.

The declining economy and highly dangerous environments have significantly decreased the quality of life for Venezuelan workers and their families, to the point where no longer home or workplace are safe places.

Over the last decade, the crisis has reached its peak, bringing the lowest salaries in the world, hyperinflation levels of 130 percent inter-monthly [3]; severe shortages in food, medicine, auto parts and other kinds of goods.

Some examples about the crisis are: in January 2016, the Venezuelan Association of the Plastic Industry (Asociación Venezolana de la Industria del Plástico (AVIPLA)) noted that the industry was operating at an average 50 percent of its installed capacity, when the plants at “El Tablazo” Petrochemical complex of PEQUIVEN (main supplier of the resins), were shut down for almost two straight months [33], which generated employers paying salaries, no production, impact on consumers.

How Can the Petrochemical Industry Solve these Problems and Get Ahead?

To be able to overcome this crisis we must know that there is no “magic” solution to these problems. To solve them we must have patience and above all, hard work. A fast solution could be the repair of some tools or equipment that are defective. Another short-term solution could be the incorporation of trained personnel to deal with these situations, among others.

The first thing we must take into account when designing recovery strategies in an economic crisis, is how strong the impact of it on the industry and its scope was. For example, if the crisis continues to affect, a correction system should be developed for a real time solution and for the future.

In Venezuela’s case, the first thing would be to implement an economic recovery plan by implementing optimal management of state resources, decrease in political expenses, budget injection in the industries that are the fundamental pillar of the country (oil, petrochemical, minerals, and some others) with the help of foreign investment to have a faster response in the growth of the economy. This could begin to solve the most important problems that affect this industry such as those mentioned above:

Currently, the Venezuelan petrochemical national company Pequiven is surviving with the little that it receives via dividends of Metor and Supermetanol on the one hand, and on the other one from the sale of methanol and urea to the foreign market through its Colombian subsidiary Colombian-Venezuelan Monomers.

It is necessary to understand that in this case only one of the solutions presented above is being taken into account, which is foreign investment in the industry that has prevented the continuous deterioration of the facilities and also have brought more equipment that can help the optimal functioning of these plants.

Another way to help in the development of this industry is also to improve the stages mentioned above, such as the oil industry that is dedicated to the extraction and transport of hydrocarbons that serve as food for the petrochemical industry. The solutions are practically equal to petrochemicals, but with the exception that many transnational companies have already injected money for the improvement of the industry as well as the upgrading of the wages of their workers, which turns into a greater performance of their part in the projects where they are involved.

For example, the transnationals, Chevron (has special permission from the United States government to operate despite the sanctions and block by the U.S.), Rosneft and Gazprombank (these last two are Russian companies that do not need any type of permission to continue operating in Venezuela, because of their alliance with the current Venezuelan government) continue to operate “normally” in the country.

Finally, it is necessary to analyze and see in these crisis a form of self-criticism of how things should be done to ensure that companies function optimally and without possible risks of being deeply affected by a future economic crisis. Also, as an example to avoid taking actions such as those taken in the mentioned country that led to its worst economic crisis, thus causing a delay, deterioration and collapse of the industrial economy in that country.