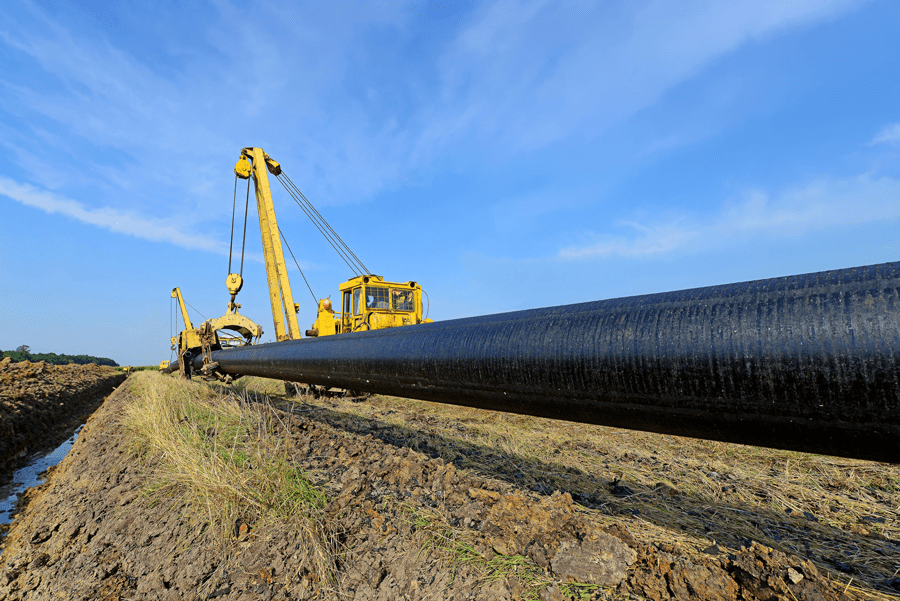 Five major players – Kinder Morgan, Williams Companies, ONEOK, Energy Transfer, and Plains All American – each with extensive pipeline networks that zigzag across the country, dominate the midstream oil and gas segment in the U.S. Numerous regional companies also facilitate the intricate delivery of petroleum products on a smaller scale.

The downstream segment relies on the pipeline operators to deliver crude oil, natural gas, carbon dioxide, and other refined petroleum products for processing at their facilities, which are then sold to end users. Likewise, the upstream market also utilizes the midstream segment to transport crude products to downstream refinery and processing facilities. The midstream oil and gas segment also consists of fuel transportation via trucks, rail, vessels, and marketing activities on the retail and commodity trading side of the business. When performed well, the midstream segment is a perfect middleman.

As in any business, there are unforeseen issues that arise or, in some cases, are self-inflicted. Safety is the primary concern for all operating segments in the oil and gas industry; the midstream market is no different. Although a vital piece in the value chain that moves the industry along, pipelines often have a more dramatic connection in the consumer eye as their infrastructure snakes across the country, sometimes in the middle of neighborhoods, cities and towns, and spanning thousands of miles. What happens when there is a pipeline leak? An explosion? These concerns are always at the forefront for all involved in the midstream market.

Over the years, midstream companies have experienced their share of ire from consumers opposing expansion of pipelines, in addition to leaks, explosions, and even fatalities because of an accident from their terminal, processing facility or pipeline segment. It must be understood that pipelines are a vital component to maintaining a robust energy market that benefits all citizens, but how do we balance the interests of midstream expansion with the interests of consumers who live near pipeline infrastructure?

Many that work in the oil and gas industry admit the balance is tough. On June 3, 2020, residents near a Kinder Morgan gas plant in Synder, Texas, had to evacuate because of an explosion at the facility or “flare burp” during a process of releasing liquid. In this case, no one was injured, and the incident was contained quickly.

ONEOK, the Tulsa, Oklahoma-based midstream provider, incorporates an Environment, Safety and Health (ESH) management system into its business operations to ensure a safe and environmentally-friendly framework for employees and external stakeholders. It is an 11-part initiative that gives everyone a voice in how the company conducts business to maintain a zero-incident culture. It is a bold commitment and, if executed well, it mitigates risk, eliminates incidents to employees and the public, and solidifies the company’s license to operate in the public domain.

Like ONEOK, Plains All American, a Houston-based pipeline, marketing and storage operator, has an extensive sustainability collection that lays out its commitment to safety, environment, communities, employees, and its accountability, ethics and integrity mandates. The last major oil spill the company had was on May 19, 2015, off the coast of Santa Barbara, CA. The California Office of Spill Prevention and Response estimated that over 100,0000 gallons of crude oil discharged into the environment and 21,000 gallons reached the Pacific Ocean. In 2019, the company was fined $3.35 million and paid for the cleanup, estimated at $335 million. “We take our responsibility to safely deliver energy resources very seriously, and we are committed to doing the right thing,” the company said in a statement. “We are sorry that this release happened, and we have and will continue to work hard to re-earn the trust of area residents.”

Part of the business process many midstream companies encounter is expansion and how to safely expand with approval from the many stakeholders involved, ranging from state regulators and politicians, to community groups, environmental activists and landowners concerned about eminent domain. Pipeline expansions are contentious, such as the well-known Keystone Pipeline, which was denied a request on July 7, 2020, to continue construction by the U.S. Supreme Court. However, on July 15, 2020, Dakota Access Pipeline (DAPL), another popular interstate pipeline, was allowed to continue operating by the U.S. Court of Appeals for the District of Columbia. A lower court ordered the pipeline owner, Energy Transfer, to shut down the line until a thorough environmental impact review was completed. Like Keystone, DAPL has been fraught with objections from protestors, who claim that the line should not be allowed to build under South Dakota’s Lake Oahe, a water source for the Standing Rock Sioux tribe.

Pipeline companies continuously come under heavy fire from local communities and environmental groups opposed to expansion in their communities. The Atlantic Coast Pipeline, a 600-mile pipeline that was planned to cross 14 states, was canceled July 5, 2020, by the operators, Dominion Energy and Duke Energy, after investing $3 billion in the project. The operators cited continued uncertainty and anticipated delays in the decision to cancel the project. The original cost to build the pipeline was $5 billion and, according to Dominion and Duke, the price tag had increased to $8 billion.

“This announcement reflects the increasing legal uncertainty that overhangs large-scale energy and industrial infrastructure development in the United States,” Dominion CEO Thomas Farrell, II and Duke Energy CEO Lynn Good said in a statement. “Until these issues are resolved, the ability to satisfy the country’s energy needs will be significantly challenged.” This comes even after the pipeline partnership received a green light to proceed on June 15, 2020, by the U.S. Supreme Court.

Over the years, M&A activity in the midstream segment has been a routine occurrence with several acquisitions between all competitive players. In September 2015, two large companies in the midstream market, Williams Companies, based in Tulsa, Oklahoma, and Energy Transfer, based in Dallas, Texas, agreed to merge. The merger was scheduled to close in June of 2016. The combined company would have surpassed its rival Kinder Morgan in assets and revenue. Five years later, both companies are still battling over who should pay the breakup fee arising from the muddled deal.

OILMAN published a longer article regarding the crippled deal, which included source material from a 33-page Market Institute report published in April 2020; however, a Williams Companies’ law firm demanded OILMAN remove the article, saying the report contained incorrect information. I contacted the report author, Charles Sauer, and he stands by his in-depth research regarding the failed merger.

As an advocate for the oil and gas market, we regularly report on emerging technology shaping the industry, new and improved products and services, M&A activity, financial news, and people making a difference. Several media organizations cover the same oil and gas topics. Many of those organizations, such as Bloomberg, Wall Street Journal, The New York Times, The Dallas Morning News and The Houston Chronicle, also reported on the Williams Companies and Energy Transfer subsequent legal battle. In the end, as a media voice for the oil and gas industry, we were disappointed to receive a demand letter from a major midstream operator.