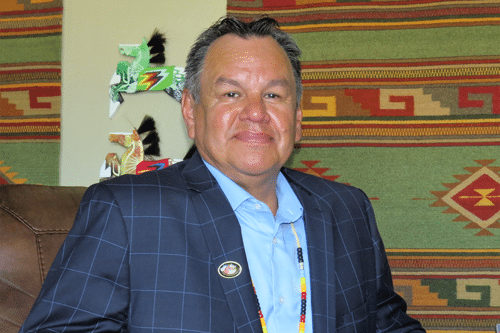 Jason Spiess: Let’s start out by having you tell us about Missouri River Resources and the Three Affiliated Tribes.

Ken Hall: Dave Williams is our CEO and we both are enrolled members of the Three Affiliated Tribes; a few years ago it was just an idea and concept on paper. Fast forward to last year where they drilled their first four wells. Very historic event.

The tribe has been involved with oil and gas since the 1950’s, but we’ve never drilled our own wells until last year. That was very monumental and exciting. Now they are also engaging in midstream activities and workforce development as well. It’s been a really good start to a viable company that could become a big player someday.

JS: When I interviewed David Williams last year he mentioned how the goal was to have an all Native American company – from the drillers to the scientists to the administration. Is that still the goal, and what does that mean to you?

KH: Yes, that means everything. We are a sovereign nation; we believe in our own people. We believe it is a new day. When you talk about oil and gas in the tribal nation there are sovereignty models out there. And we are trying to become another one of those models. We use our own people when you talk about workforce development and oil field services. From top to bottom – our environmental science folks, our drillers, our pumpers, our administrative folks. We believe we can do quality work and these people are just as capable as the next person.

JS: Where are they getting their education? Are they using traditional universities or is there a Native American education system? Talk to me about the education process.

KH: We know there are vocational, educational institutions in our state (North Dakota), United Tribes comes to mind, a technical college. And then we have a community college in our backyard, the Nueta Hidatsa Sahnish College, formerly known as Fort Berthold Community College. They are a four-year accredited college now.

We have a partnership with San Juan College in New Mexico, they just sent a few students down there for training. And then you have the universities in the state of North Dakota as well. It’s a good set up for us; a good model. We believe we are going to have COOs, CEOs, geologists, drillers and all of that will be Native American.

JS: About a year ago I did a story for the Bismarck Tribune about what you had going on there with the MHA Nation. I argued it was empowering the people, empowering the tribe. What do you make of that statement?

KH: Empowering is a good choice of words because when you empower someone, you build confidence in them. You let them know they can do it, and then they start to flourish. Once they are given that opportunity they start to believe in themselves. Once we can get them to that place now they are off getting their education.

They are off becoming a professional or a businessperson or having a specialty that they can offer and come back and really help their nation to become prosperous again. Which we once were before.

It’s all because of legislation. People talk about all the statistics; we want to focus on the positive. We are headed toward being a healthy and prosperous nation. We have a God given resource that we sit upon and we believe we can maximize that resource. The potential is unlimited.

JS: Are the people within the tribe accepting this or is there some resistance?

You are always going to have a few that resist. We are in a day now as everyone understands we are in the era of technology. Technology was the game changer for the Bakken; I think everyone understands that. I think the word for the day is becoming more ‘efficient.’ With this downturn it gives everyone a chance to become more efficient at what we do.

But getting back to your question, I think there will always be some resistance. But if they could see the big picture, and look at the economics of it, I think they would buy more into it. If they knew the technology is probably the safest it has ever been, I think they can buy into what we are doing here.

KH: I am glad you brought this up. Early on when the leasing happened, 2006 and 2007, if you were off the reservation and you were a private owner, it took you four steps from signing a lease to getting your first royalty check. Now you step on the reservation, all the federal regulations that are in place are a 49 step process.

It is a cumbersome process — all these federal agencies that have to be a part of that process. Three different routing numbers (laughs), its very complicated and not everybody understood that.

And therefore a doughnut hole was created. When you would drive at night and you could oversee the landscape, there was all these flares outside the reservation. It was completely dark on the reservation. There was a doughnut hole. All the activity was around, but nothing going on the reservation because of the regulations and the cumbersome process. Nobody actually knew what the process entailed and yet we had to streamline that process from a land and mineral owners’ perspective.

We had an association early on where we lobbied and were also advocates on behalf of the land and mineral owners. We tried to create a one-stop shop, and it is still being developed to this day — a one-stop shop service center, which we believe could be in Denver. All tribes could utilize when it comes to leasing and right-of-ways in order to streamline the whole process.

So that’s still in the works. But we got a little better at it, as far as timelines and trying to become more efficient. There we come back to that word again. (chuckles)

JS: How about opportunity. You mentioned that word earlier. Have you seen any spin off or service businesses start up in the reservation? Whether it is a long haul trucker or maybe just a guy with a pizza shop. Are you seeing any sort of entrepreneurship happening?

KH: Oh yes, the opportunities are tremendous. I think before the boom we had a handful of Native American businesses. Today, I want to say, there is well over 250 that have their own business. It’s oilfield services, roustabouts, trucking, you name it. It’s been a tremendous opportunity for those folks.

When I got an office three-and-a-half years ago we created what they call a Community Development Corporation. They have their own charter, mandate from the Tribal Business Council, own bylaws, and appointed board. They work on housing projects and businesses on Main Street — like a coffee shop, which is opening, a hair salon, a flower shop. Those businesses are opening on Main Street as we speak.

The spin offs have been tremendous. It’s been a real opportune time if you are an entrepreneur and wanting to get into business.

JS: Final thoughts. What do you want people to know about the Three Affiliated Tribes and what you guys are trying to accomplish?

KH: I think for starters, the state of North Dakota and the industry have to realize we are big players in the Bakken. There was a recent article that pointed out that two-thirds of the Bakken is in western North Dakota. That’s us. When you talk about the core area, that’s us again. Going forward we are very optimistic because of the core area we are in, the opportunities that are presented to us and being able to capitalize on this opportunity. We want to go forward with a great amount of optimism because we are only probably 25 percent into the development as a nation.

KH: You are absolutely right. That is empowerment