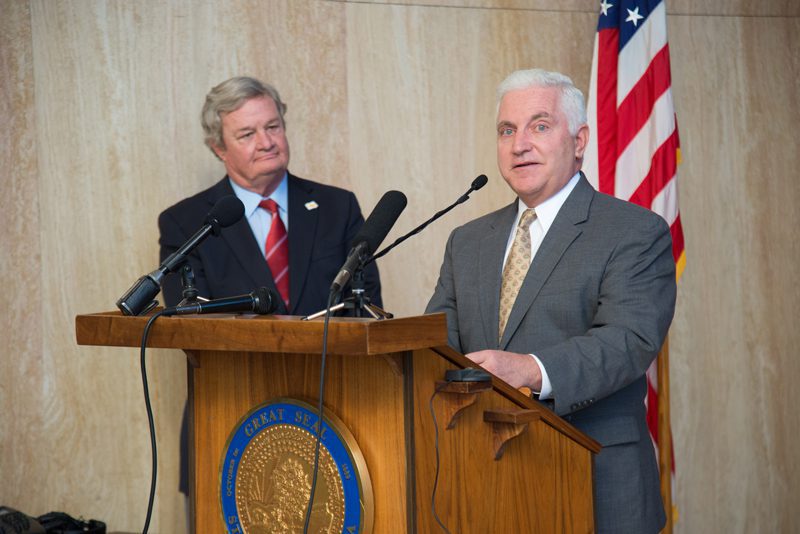 William Gilliam, CEO, Badlands NGL, sits down with Jason Spiess to share his views on Bakken flaring, the plastics industry and their shift in timelines regarding the $4 billion polyethylene plant in North Dakota.

Jason Spiess: Are you still planning on building a polyethylene plant in North Dakota?

William Gilliam: We intend to build two plants now, not one. The first one will not be in North Dakota. It will be someplace else within the continental United States.

JS: Was that the original plan?

JS: Was that because of a shift in the marketplace?

WG: I wouldn’t call it a shift in the marketplace; there is a Bakken-Marcellus disparity. If you are a mineral rights holder or an oil and gas producer in the Marcellus, Pa., Ohio or West Virginia, your wet gas is produced and you have ethane in that wet gas. And regardless of where it gets sold, you get paid for it. Because 300,000 barrels of it are being moved primarily to Europe. But also a little bit to India. And the polyethylene companies are paying the BTU value of the ethane, and they are paying the 35-cents a gallon it takes to get it there. The 35-cents is a number to get it to Europe. It actually costs more to get it to India, but we don’t know what that number is at this time. In the Bakken, right now, if ethane is exported by Vantage to Canada or if it is exported by Aux Sable Alliance to Chicago or ONEOK to the Gulf Coast, you lose money on it. So mineral right holders in North Dakota, oil and gas companies in North Dakota are subsidizing polyethylene companies. That is a disparity.

JS: When did this happen?

WG: It’s always been that way.

JS: How much of this is tied to the cost of logistics in transportation?

JS: Is it pricing?  What caused the change?

WG: Let me give you sort of a flavor of it. Seventy-five percent of European polyethylene uses Naphtha, which is an oil feedstock, to make polyethylene. Twenty-five percent of ethane crackers used ethane from the North Sea. So that ethane was running out, and in order to secure long-term supplies without having to change their cracker technology, they contracted with Enterprise products and one other company to get ethane delivered by specialized ships that literally have to built just to bring ethane to Europe – those are 10-year fully signed. The entire export thing is sold out. There are no more facilities in Europe that are on ethane that haven’t agreed to buy this imported ethane, so there is no more additional market as it were to develop there unless someone decided they were just going to put in an ethane cracker instead of a naphtha cracker, which we don’t think is likely. But that’s the reason why they were facing billion-dollar investment decisions. If they didn’t find another source of ethane, in this case Enterprise and the producers in the Marcellus have come up with a very good formula where in fact the producers are getting paid instead of losing money.

JS: Thoughts on the natural gas investments across the country and changes to it?

WG: If you look at what has happened since a little over a year ago, oil has gone from $100 to less than $50. Polyethylene profits remain the same. But a lot of the ethane crackers on the Gulf Coast, if they weren’t being built, as of the end of 2014, they’ve gone on hold. Every single one of them is on hold. No new crackers are getting built today. Other than our two.

WG: Look, we identified a strategy of building as close to the wellhead as possible and building something that was going to take advantage of physically and economically stranded ethane. I think we feel, the ethane disparity, the Bakken-Marcellus disparity, is not a sustainable business model. It will not last. It will not stand.

JS: I have often said the oil and gas industry is going through a paradigm shift to the degree many are rewriting their business models. In the communication industry the Internet created a paradigm shift. If you agree or understand my question, do you have any comments on the shift happening in oil and gas?

WG: There has been a paradigm shift in oil and gas, and in polyethylene and polypropylene. In the 1980s more than 50% of the market were companies that were fully integrated oil and gas and plastics. That’s not true today. There are very large companies, like Dow, like Lando Vauzelle, that are not basic in oil and gas but are huge producers of polyethylene. I think you have very big companies here. Who would have though Exxon and Mobil would merge, or that Texaco would become part of Chevron, so these companies are of size where literally a single world scale polyethylene business doesn’t move the earnings needle at all. Then you have companies like Continental Resources and Whiting that have wonderful property and do a great job of bringing oil out of the ground, and are cost-effective and driven the cost curve. Now would it benefit them as a business model to have more integration? Sure, and if they went to Wall Street and said, “Look what we are going to do, we are going to build a polyethylene plant, we are going to build a refinery,” Wall Street would annihilate them. Absolutely kill them.

JS: Do you discuss flaring or does it impact your company?

WG: When Badlands NGL first started looking at the possibility of building a polyethylene plant in North Dakota and was it needed, we looked at the flaring issue. And we said because of gas and because of ethane, you could run into an infrastructure problem where production kept growing, flaring may have to go back over 50 or 60 percent. And that’s just as true today and I can be very specific. Right now because of the fact MDU Dakota pipeline was not built, I don’t think that was a good decision. But MDU did not have sufficient support and I understand that. There’s exactly one way of getting gas out of North Dakota – that’s Northern Border. Northern Border is about one-third American gas two-thirds Canadian gas. It comes into the state dry as a bone. Polyethylene is taken out. We leave all the ethane in here. So right now today you have about 2.4 billion cubic feet of natural gas leaving the state, going to Ventura out in Iowa, and in Chicago. It has between 10/50 and 10/70 BTUs of heat content. It is right at the upper limits of when you can sell that gas. So if you look at the actual committed sellers of natural gas in North Dakota by 2020, that’s going to turn around and instead of being one-third American gas it will be two-thirds American gas. This isn’t a function on whether or not oil goes back to $100, this is just a function of math. We believe or we’ve gotten some proprietary work done that says by 2020, assuming $70 oil, you will have an ethane content in Northern Borders. Right now, there is 120,00 barrels a day in Northern Borders and it is going to go to 200,000 barrels a day. At 200,000 barrels a day, that gas cannot be sold. It’s too hot. What are you going to do about that? You are going to have to shut some production or flare a lot of gas.