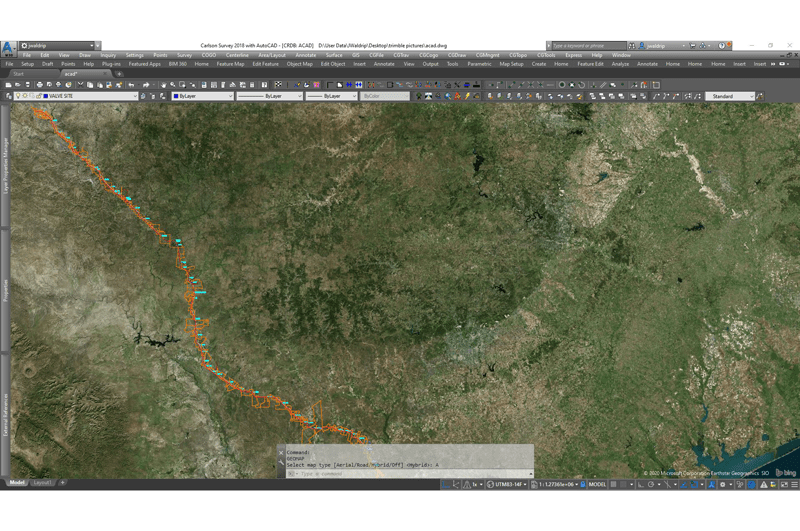 There’s a reason Texas is called the Lone Star state. It’s more than just its quest for independence; there’s many a star that shines on some lone countryside out there, too.

That’s what makes Texas such a big oil state – open spaces and undeveloped land just waiting to be explored.

“Our bread and butter [are] the oil and gas industry,” says Josh Waldrip, Manager of As-Built Services at Topographic. “From Texas to New Mexico, Colorado, Oklahoma, Wyoming, and North Dakota, we provide our clients with the location and positioning for installing underground pipelines and for staking drill sites.”

Topographic surveys specialize in land elevation rather than roads. A topographical surveyor wants to identify physical features. Topographic surveyors usually call on traditional measuring equipment to complete their work. Before GNSS surveying came along, Topographic’s crews needed to start every job from a known or assumed control point. “This meant doing things the ‘old school’ way – carrying a total station or even using tape measures and chains,” says Waldrip.

Today, 95 percent of Topographic’s work is done using GNSS. The company has 15 crews equipped with GNSS receivers and RTX correction services. Topographic regularly uses RTX for major projects such as staking wells and pipeline routes, along with smaller as-built projects. The company is currently using Trimble CenterPoint® RTX to survey a 185-mile pipeline that runs from Oklahoma to Texas.

RTX correction service uses GNSS data from a global network of GNSS reference stations. The data is streamed to control centers where it is processed by advanced modeling algorithms to generate correction data for real-time precise GNSS positioning. The corrections are broadcast to roving GNSS receivers via communications satellites or over the Internet via cellular phone services. The rover uses the information to produce high-accuracy GNSS positions. Users can achieve horizontal accuracy of two centimeters (2cm) in real time equivalent to RTK, but without the need for reference stations and radio datalinks.

This use of satellites to deliver the GNSS corrections makes the system particularly well-suited for work in remote locations. “Getting to job sites is often a challenge for us,” explains Waldrip. “The sites tend to be in hilly, rocky, and generally rough areas. The beauty of RTX is that it provides real-time location anywhere, meaning our crews don’t have to traverse through forests or other rough and sometimes dangerous terrain just to set up RTK base stations or operate total stations.”

“We don’t have to set up a base station, use a radio or worry about cell service with RTX, so we can hit the ground running,” he explained. “All we need to do is get in the truck, go to the job site, calibrate, and start collecting data.”

RTX replaces both the radio and the GNSS base station, so they save on buying and repairing equipment.

After using RTX on a number of smaller projects, Topographic is putting the service to work on a pipeline surveying project that will run from Cushing, Oklahoma, south to Trenton, Texas. The 185-mile pipeline is part of a planned 840-mile line that will eventually extend to the Gulf of Mexico.

Because cellular and network coverage in this remote area is spotty, VRS and RTK won’t be options. Instead, Topographic’s crews are again using RTX with a GNSS receiver. “Like most of our projects, this job requires that we survey everything with centimeter-level accuracy,” says Waldrip. “We can only do this using RTX correction service.”

RTX performance is equivalent to VRS or RTK, but the level of precision will provide Topographic’s client with accurate footage of pipe, acreage of land, and location of features above or below ground.

To achieve this accuracy, Topographic crews use static GNSS techniques to set control points. The static data is processed in OPUS and then calibrated to the specified coordinate system. The points then serve as the basis for the control and calibration of the RTX real-time work.

Based in Chicago, Nick Klenske writes about science, technology and innovation. Learn more at www.nickklenske.com.