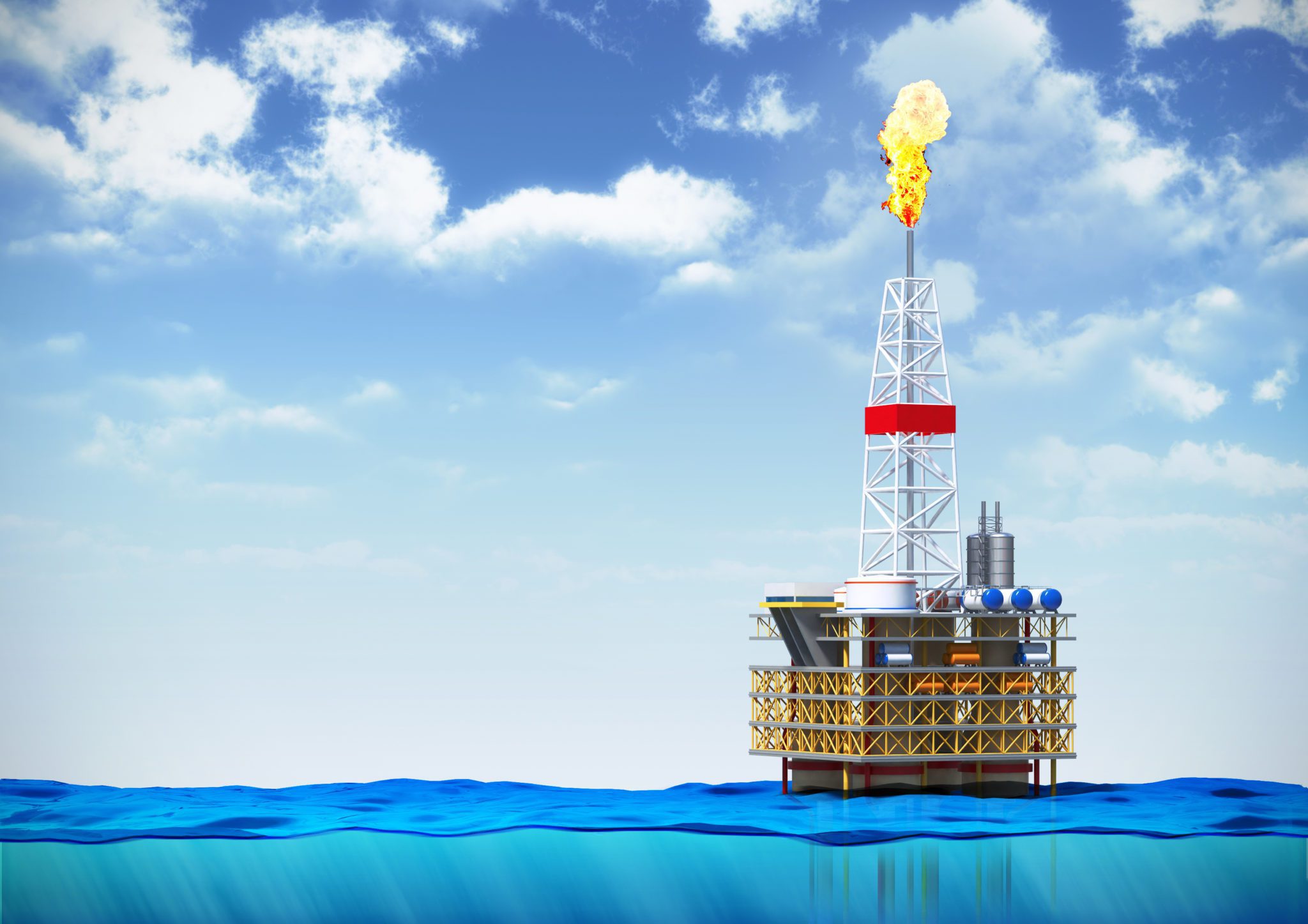 To say times were different when the first Gulf oil well went into service is a bit of an understatement. The year was 1938, and the Superior-Pure State No. 1 well was the first of its kind—if not extremely risky. One mile offshore, the Creole, Louisiana well used very little metal to drill into the sandy depths, nor did it have much to support itself against rough weather at sea. Instead, 300 treated yellow pine pilings were bored 14 feet below into the Gulf floor, while most of the well’s 320 foot by 180 foot deck was also made of wood.

Predictably, the structure didn’t last long. Two years later it was wiped from existence by a rather minimal Cat 2 hurricane that bumbled across the Gulf, causing more flood damage than anything else. Still, while the the Superior- Pure State No. 1 well never found any oil in its short existence, it was a stunning proof of concept. Drilling in the Gulf was no longer just a fanciful idea. It could be done with the right tools, engineering and technology.

But even as subsea oil and gas mining tech has improved dramatically over the intervening decades, drilling in the Gulf remains an engineering challenge, as well as an extremely expensive and dangerous venture.

Beyond outer space, few environments are more inhospitable and more unpredictable to mankind than the the deep sea. As such, finding ways to minimize direct human involvement and reduce risks is an ongoing battle. Although we’re unlikely to completely remove the human element in the foreseeable future, both artificial intelligence and robotics are advancing to such a degree that fully-automated drilling and exploration in the Gulf are closer than ever.

The oil industry often gets prodded for being slow to change and adopt new technologies. When it comes to artificial intelligence, or AI, no fault should or could be given. The mysticism currently surrounding AI often presents a false image, perhaps drummed up by countless science fiction movies like Stanley Kubrick’s 2001: A Space Odyssey or more recently, HBO’s WestWorld. Invariably, our fascination with AI stems from the idea that we can use it to surpass human limitations and completely divest ourselves from certain tasks. (This is also ignoring the fact that AI almost always ends badly for humans in popular media, but I digress.)

As it stands, artificial intelligence is not what many people believe it is. Far from human-like machines with a human level of reasoning, current AI applications are mostly complex algorithms that are designed to help reduce errors that often occur when a human element is involved, as well as create more efficient data collection and decision making processes. This is indeed the case when it comes to AI applications in the oil and gas industry, and especially in subsea drilling.

Take Quantico Energy Solutions in Houston, Texas, for example. This 5-year-old artificial intelligence company is on the forefront of applying new machine learning techniques to the oilfield.

“We focus a lot on characterizing the properties of the rock,” explained Quantico CEO Barry Zhang. As Zhang informed us, the chief focus for their company is on big data collection. However, their method of data collection, analysis, and use is where the artificial intelligence applications really begin to shine for subsea drilling.

And for the subsea, data collection is exponentially more difficult than it is on the surface. “The accuracy for subsea is a substantial requirement of entry,” Zhang said. “Instead of a $6 to $10 million well, we’re talking a $100 million well. The unique challenge to subsurface is that there’s not much data.”

As Zhang pointed out, part of the problem isn’t just the difficulties working in the harsh environments that exist so far below the ocean’s depths. There’s also a decreasing number of oil wells being constructed. Fewer wells means less data. Less data means an increase in inaccuracies regarding important decision making, such as where to keep drilling.

“Oil companies will run tools that are about 100 feet in length,” Zhang explained. “They’re a collection of electrical acoustics and nuclear sensors. They emit signals that traverse the nearby rock and measure what comes back. Based on time, volume and frequencies of measurements, they can infer the density of the rock. These tools are very expensive.”

For Quantico, the solution to data collection involves adding no extra tools or sensors to mining equipment. “We’re using the drill bit as a sensor that’s an interface with the rock. We’re using AI to tease out the properties of the rock, but without washout intervals,” he said.

That means big savings for clients, and importantly, more accurate data collection. “Instead of using it real-time, I’ll go back on a well where I didn’t run these tools…and use Quantico data to complete the logs. Once you know what the rock property is, that data is valuable,” he said.

Then, of course, there’s the safety aspect.

“It takes that sonic tool hours or in some cases days for that sonic tool to reach where the drill bit is drilled. Even if you’re running that tool, the AI can give you the sonic properties much closer to the time. You get that hours ahead of time,” Zhang said.

Faster comprehension of the rock’s properties means a far reduced risk of hitting a cataclysmic blowout or ruining a drill bit by hitting an unexpected snag in the rock.

“The last big application is that if you know what the rock properties are you can adjust how you drill that rock to be more efficient and in less time,” Zhang added. “Right now, when they drill they can see the energy going into the drill rig. But when the energy going into the rig shoots up, but they’re not seeing any performance in drilling speed, that could be caused by multiple things.”

That’s where Quantico’s artificial intelligence solutions come into play. “Those are the things that we do,” Zhang said. “For Quantico, what the AI does is give you data where you did not have a direct measurement. You didn’t run a tool, or a sensor, but you find that insight valuable. Before, it was ‘do I want to pay all this money to run a tool?’”

Quantico’s AI has more extensive applications as well. Yet for Zhang and others, the media-created hype over AI has muddied the waters a bit, while a realistic understanding of what AI can actually do are still impressive and valuable. And as Zhang adds, AI is not a replacement for current data collection methods. It can serve as a complement. But ultimately, AI is a tool the industry needs in order to more effectively move forward.

Said Zhang: “Embedding the geoscience as a constraint to the AI is a way that overcomes some of the challenges in places like subsea where running any measurement is expensive.”

Quantico’s use of AI is, of course, not the only available option. Zhang explained that their company specifically focuses on geoscience and geophysics because it’s their “competitive advantage.” But in their niche application of AI, they’ve excelled, primarily because of the value-add that’s been seen by their clients, which include Shell, Statoil and Nabors.

Other AI applications exist. Some are even incorporated into the other major technological leap for subsea mining operations: remotely operated vehicles, or ROVs.

Subsea technologies have come a long way in reducing the number of worker safety concerns alongside bringing down costs and improving mining operations. ROVs, in particular, allow companies to operate in depths simply untenable by human divers and even difficult for human operated vehicles (HOVs). And as new technologies emerge, the industry is witnessing an even larger cross-section between computing and robotics, driving a new wave of ROVs that can surpass even the most skilled human divers.

Before the industry started using remotely operated vehicles in subsea mining, the only options available were human divers and human operated vehicles. Both, however, presented unique challenges. Humans divers have a limited amount of time they can safely operate under water. And due to the ambient pressure, humans can only dive a few hundred feet. Even then, resurfacing is slow, and decompression can be both timely and costly.

Commercial diving is an extremely dangerous occupation. OSHA estimates that the commercial diving industry has a death rate of up to 50 deaths per thousand divers over the course of a worker’s career.

Meanwhile, HOVs offer some protection, but still maintain many of the same limitations due to physiological restrictions on diving depths. Additionally, the machinery required to keep the human occupants alive reduces the overall functionality of the operating vehicle.

ROVs help solve the physical limitations presented by human operators, particularly at the depths now common with subsea oil operations. However, the precision typically available to human divers was a bit out-of-reach for ROVs for some time. And with many operations now working in 2,500 or more feet of water, human involvement in the subsea is effectively impossible.

The push toward more advanced ROVs is not simply a desire; it’s a need. Although ROVs have allowed oil companies to dig deeper and work more effectively under increasingly harsh underwater conditions for the past few decades, the machines were for some time still limited by their lack human qualities.

Thankfully, an explosion of new technologies are now merging with ROVs, allowing them to better mimic the human counterparts they replace in the deep sea operations. Additionally, improving data technologies are allowing for an advanced level of control unseen in previous decades.

ROV companies are focusing on providing better imaging and vision technologies to help increase precision operations, advanced software that allows for more vehicle autonomy and at­tempts at better incorporating machine learning and artificial intelligence. The latter may one day let ROVs learn how to solve the unique chal­lenges with subsea drilling with less input from human operators.

For now, however, both work class and inspec­tion class ROVs can operate with extreme preci­sion while under human control and oversight. Both types can utilize the nimble millimeter movements often necessary for tool placement and other functions. And the introduction of new communications technologies, such as 4G and in the near future, 5G, means ROVs can not only communicate without lengthy fiber optic cables, but can communicate with each other using various radio frequencies.

Additionally, speedier data connections mean incorporating complex programs into the vehicles much easier, as huge amounts of data and stable data connections are required to operate such vehicles.

ROVs are still not an end-all, be-all for subsea drilling applications. But emerging technology that allows for more nimble movements and more accurate tool usage makes them far better than their human counterparts.

The science fiction stylized vision of both AI and robotics may never come to fruition in our lifetimes. But with greater necessity comes more innovation. As long as the industry continues to explore such options, it’s only a matter of time before science fiction becomes science fact.