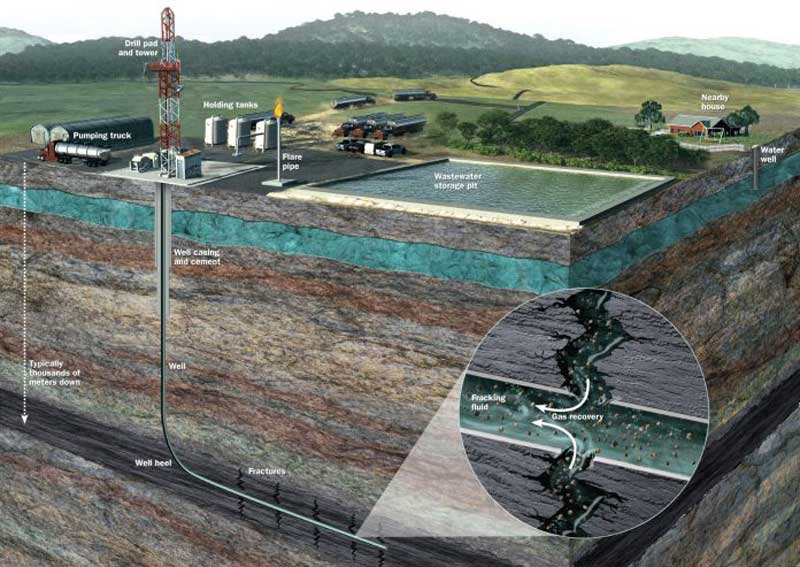 Despite the use of tools that generate a prediction about the productivity of the fracture, the response of this type of software is not successful most of the time. This is because it is momentarily impossible to understand the arrangement of the rock and the strength that it can offer to fracture in each millimeter of penetration. Therefore, it is a complete necessity to be able to test the functionality of the fracking process. There are different methodologies that are associated with technologies to test the production of a well, and these are used to test the quality of hydraulic fracturing.

There are two forms of diagnosis for hydraulic fracturing: indirect and direct test.

The hydraulic fracturing test system is a technology that is widely used in the geotechnical field, being adapted to the field of oil and gas some years ago using geomechanics. To carry out this procedure, the following is required:

The taking of cores from the area of interest, then plugs are cut with an eccentricity of three feet long and one foot wide, these samples being identical to those used for rock destruction tests in geomechanics laboratories. Triaxial test (TRX) equipment is then used to simulate the reservoir pressure at which the rock was, both vertically and horizontally.

Next, a fluid at high pressure is added, to reach the point of fracture and fracture propagation, the latter procedure which is done at a slow speed in order to know the amount of fluid that the rock can resist. At the end of the test, the rock can be studied post-mortem, thus noting which channels were and which form the fracture took at the time of destroying the rock. This allows personnel to understand different factors, such as the fracture propagation and direction, and the average pore throat size per barrel of injected fracturing fluid.

This methodology was tested and the results were part of an article titled, “Simulation of Hydraulic Fracture Propagation in Poroelastic Rock with Application to Stress Measurement Techniques,” written by Boone and others. During this study, they decided to use different processes of rock destruction to conduct a fracturing test, concluding that the use of triaxial tests with the application of fracturing fluid is the most promising. For the numeric calculation, Dugdale-Barenblatt’s non-linear fracture mathematical model was used, a poroelastic model and a final connection between the two models in order to understand the behavior of the fluid in the fracture and rock.

For the validation of the success in the hydraulic fracturing process, the most used tool by the industry is the production logging tool (PLT). In its simplest presentation, this type of tool is able to measure flow, density, temperature and pressure. Knowing the pre-fracture production values, and after obtaining the post-fracture values, they are compared, thus determining the gain.

This log is usually used before the fracture in order to know the exact values and then it is used again after the fracture when the well stabilizes, since after fracturing and opening to production there is enclosed fluid pressure that potentially raises production at the time of opening the well again. Thanks to the values provided by any of the PLT tests that are conducted on a well, it is possible to know how the skin factor was affected, and whether the fracture was successful.

For the calculation of the skin factor, the basic concept of Prouvoust and Economides’ technique is used, which uses the differences between a well that has skin effects and the result after altering the effects, i.e., the skin factor.

Another element widely used today is the resistivity image log. This type of log is run in two phases like the PLT, before the fracture to see if there are natural fractures that can be exploited or to see the integrity of the formation, and then to validate that the target area was successfully fractured.

To identify the induced fractures, i.e., created by mechanical stress, it is enough to analyze the results of the log, which must be observed as two semi-parallel lines; these fractures are always open, the direction of the fracture represents the main direction of the stress.

These types of pulses are similar to those generated during hydraulic fracturing. During the process of fluid injection at high pressure, pulses that can be registered by microseismic tools are created and, given the fact that after the fracture is done, the personnel tries to keep them open with proppants, the propagation of the fracture is maintained and the change is significant with the use of microseismicity.

The microseismic analysis is performed in real-time, which allows the on-site fracturing engineers to use various techniques to face stimulation challenges, one of which is the use of microseismic readers, and the measuring derived from inclinometers, which indicate the existence of mechanical changes in the subsoil.

When this anomaly is detected, we proceed to use radioactive and chemical trackers, tools that belong to the production logs, and are used as complementary indicators to know in this way the changes produced in the fluid paths as a result of fracturing.

Due to the high cost of applying MS technology, it is commonly used in reservoirs with high production prospecting; however, with highly significant permeability problems, the chosen candidates are usually unconventional reservoirs. In this type of reservoir, we look for pre-existing fractures in the area and analyze the best strategy to create a connection: well-natural fractures-reservoir, to use the existing flow channels and increase the flow to the well.

With the implementation of MS, the most common methodology used is to perform a pre-fracture exploration, with the intention of knowing the course and direction of existing natural fractures, then a map of trajectories and how natural fractures can effectively be influenced using the hydraulic magnitude.

At last, the fracturing process takes place, making real-time observation with the MS technology. Since the personnel already has a static map of the pre-fracture conditions, it is appropriate to process the pulses generated by the injection of fluid at high pressure, which will show the path that the fracture is taking and whether it is achieving the desired connection between the hydraulic fracture with the naturally-fractured channels from the reservoir. This type of procedure applies to all types of reservoir, both conventional and unconventional.

Hydraulic fracturing is a methodology to stimulate production in the face of the oil well. This procedure will help prolong the useful life of a reservoir but, in turn, it represents a significant value investment for companies around the world. For this reason, technology does not stop trying to search for the best tools to face the challenges that operating in the heterogeneous conditions of the subsoil brings; however, being able to verify the success of a fracture before, during and at the end of the process is a necessity of vital importance to back the investment made in the beginning, and the continuous operation of the reservoir that’s being worked.